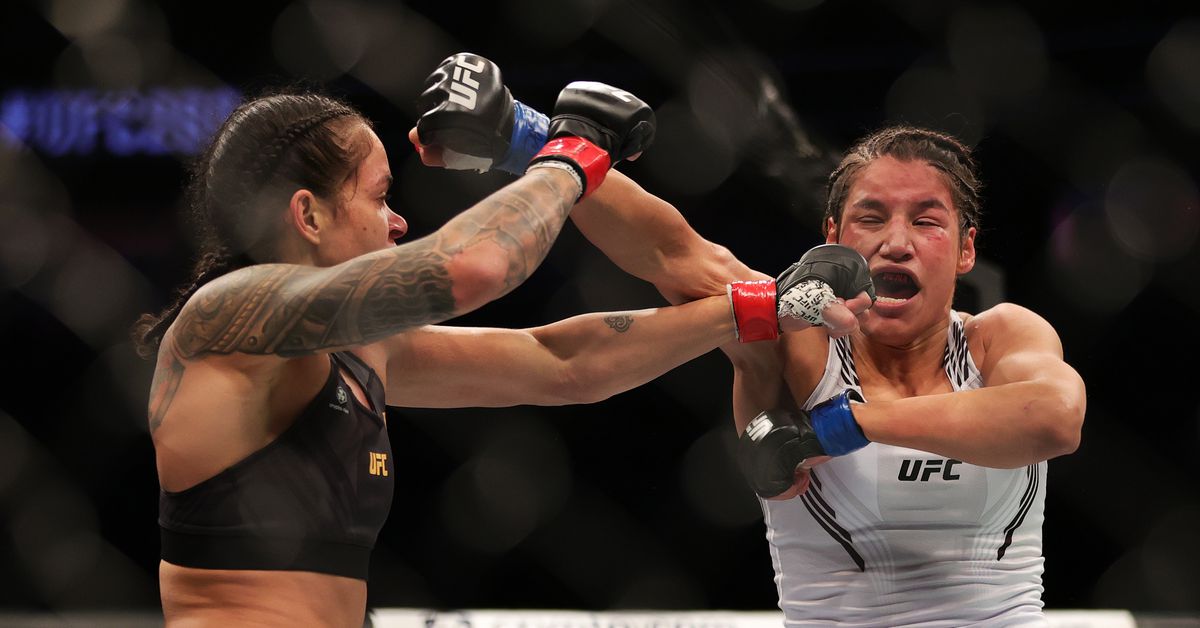 The end of the year is a natural time for reflection, particularly in the UFC sphere where there ain’t much happening until the fights start back up in a couple weeks. We’ve already shared our take on the most impressive fighters, knockouts, and events of the year, so let’s take another moment to recap an exciting year in combat sports.

This time around, it’s the most shocking moments of the year. Let’s get to it:

In the opening round, Yan patiently kept his guard high and observed as Sterling erratically threw everything and the kitchen sink in his direction. Between the extended combinations and spinning strikes were legitimate takedown attempts, but all of the above pretty easily fell to Yan’s defense. Then, Yan unfurled a crisp 1-2 — his first real offense of the bout, after Sterling had already fired off dozens of strikes to little effect — and promptly sat “The Funkmaster” on his ass.

Things went from bad to worse for Sterling as his gas tank emptied from his own pace. When the kickboxer is choke slamming the wrestler, the game plan goes out the window! Yan was dominating, making his case for pound-for-pound supremacy against an elite challenger.

Then, he threw it all away. Despite being in complete control, Yan still opted to throw a blatantly illegal knee, handing away his title as a result.

At 42 years of age, Teixeira named himself the best Light Heavyweight alive and lifted a golden strap above his head.

There are, to my mind, two uniquely surprising elements to his unlikely championship. First, one has to consider the bigger picture. Teixeira earned his title shot prior to 2021, but most assumed it would come against Israel Adesanya when “Stylebender” tried to shift up a weight class. Instead, Jan Blachowicz turned away the undefeated kickboxer — a shocker in its own right.

Then came the actual title fight, which was surprisingly one-sided. Teixeira’s resurgence has been built upon his ability to absorb knockout blows, venture into dream land, then return with a vengeance. He skipped the first two steps vs. Blachowicz, pretty immediately taking control with power punches and takedowns en route to a second-round strangulation.

On its own, Glover Teixeira beating Jan Blachowicz is not a shocking result at any point in the last decade. Given the circumstances, however, it’s a moment to remember.

Outside of his original fan base, did anyone in the combat sports world expect to give a single f—k about Jake Paul in 2021?

Sure, he had previously beat up fellow Internet nerds and a basketball player, but that barely has anything to do with real fighting. Paul crossed that threshold this year, even if he did so carefully, wisely targeting older and smaller MMA fighters rather than boxers in their prime.

Each of the three Jake Paul fights provided a shocking moment. No one expected Ben Askren to collapse from a single shot vs. “The Problem Child,” not when he withstood Robbie Lawler’s shots. Then, Tyron Woodley finally managed to hurt Paul, even if he (not shockingly) did not follow up on it. Finally, Paul caps off his 3-0 year with an undeniable sensational knockout over “T-Wood” to firmly end that chapter of his career.

Now, Paul is 5-0 as a boxer, an advocate for fighter pay/thorn in Dana White’s side, and could score the biggest fight of his career next vs. someone like Nate Diaz.

Did ANYONE expect that?

There were two very notable and unpleasant leg breaks in 2021 suffered by Conor McGregor and Chris Weidman.

The McGregor leg break has been discussed plenty. In the moment, it was a bit confusing, as McGregor injured himself stepping backwards. It almost looked like Poirier’s right hand connected, creating some minor mayhem until the replay cleared the air.

On the other hand, the Weidman incident was painfully clear. Aside from knocking Anderson Silva out and claiming his championship, Weidman’s greatest claim to fame is likely snapping “The Spider’s” shin with a check. In a cruel twist of irony, Weidman suffered that same fate on literally the first strike of the fight, as his own leg shattered from a seemingly marginal check.

Standing above him was Hall, the man known for feeling bad for his opponents after knocking them out. There were only two adequate reactions to the outcome: one could dry heave in disgust or merely sit in stunned silence.

Number One: The Lioness Sleeps Tonight

Given three full weeks to process UFC 269, I still don’t fully understand what happened in Amanda Nunes vs. Julianna Pena.

There are a couple basic takeaways. For one, Pena is a tough, a gamer willing to bite on her mouthpiece and throw down. We knew that already, but Pena proved it again. In addition, it’s clear enough that Nunes had an off night; she certainly wasn’t her sharpest.

Still, for an undeniable GOAT candidate to go down in flames in a truly bad performance, well I was and am befuddled. Perplexed. Bewildered and disoriented! It was the type of fight that makes you question whether or not you know anything at all about mixed martial arts, and that’s why I score it the most shocking moment of the year.

If I missed a big one, please let me know in the comments!

Let’s end the year in good style: by continuing to talk about Dustin Poirier vs. Nate Diaz as if it might actually happen.

Shoutout to all the athletes dieting/working through the holidays.

Haven’t had a training camp through Chrissy and New Years for a while….don’t love it lol happy eve and new year guys let’s finish this year strong and go into next year stronger. pic.twitter.com/eD99aHPujg

Would you rather party with Jon Jones or Sean Strickland?

Do you guys think Jon Jones is going to have a WHITE New Year or is it going to be ORANGE?? Yall be safe tonight, you never know when you’re going to encounter a coked out ufc fighter.

There are surely better ways to use a skateboard for self-defense than whatever this is.

A different kind of 2021 MMA year in review:

Shoutout to Cerebral Vigilante for his hard work in creating these threads and making my life easy. Click through for the full Top 20 and give him a follow! Last night was MMA knockouts, this time we’re jumping over to the kickboxing ring.