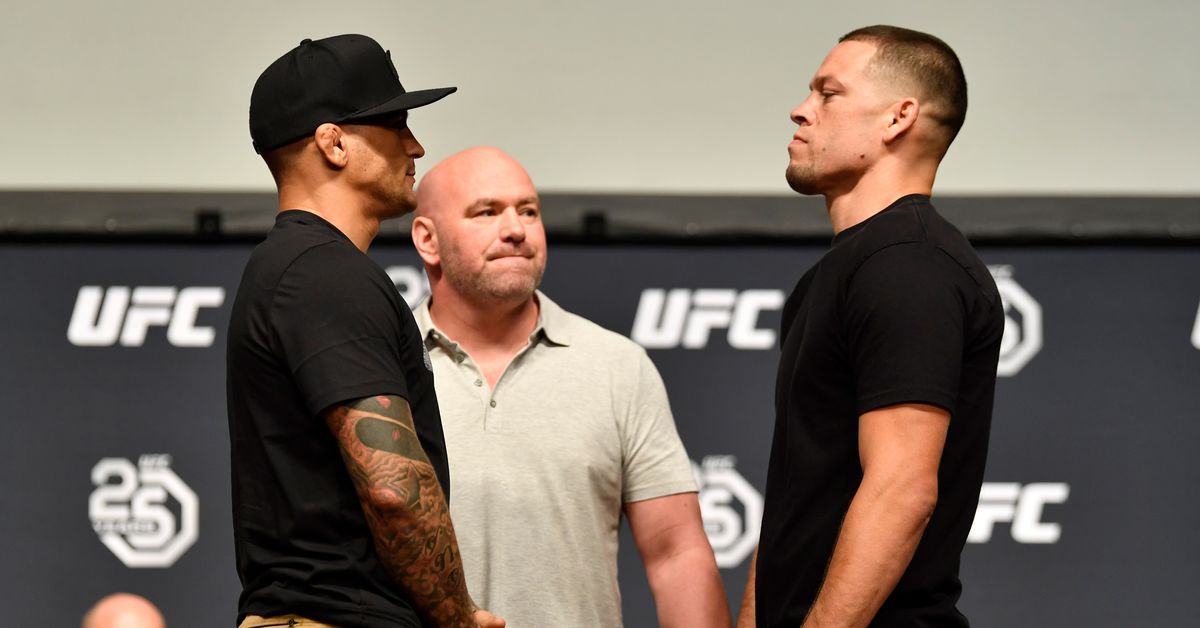 A long-awaited showdown between Dustin Poirier and Nate Diaz will have to wait longer – if it’s actually going to happen.

The UFC had recently reached out to both fighters with interest in potentially booking the fight on an upcoming card in early 2022 but despite preliminary talks, multiple people with knowledge of negotiations told MMA Fighting the bout will not be happening as of now.

Additional sources added that Poirier vs. Diaz was being explored as a possible addition to one of the upcoming cards in January or February, but now it appears the UFC has abandoned those plans.

On Tuesday, Poirier appeared on Teddy Atlas’ podcast where he first revealed the news that he had spoken to the UFC about possibly facing Diaz in a short notice fight.

“It’s a very short notice thing,” Poirier said. “Something I would hate to do is stack things against myself and take a fight on short notice, but, we’ll see what happens, man. I don’t want to give too much ‘cause I don’t know what I can say. No contract has been signed yet, but if this goes go through, I’m gonna take it. I said yes, now we’re waiting on him.”

Diaz then took to Twitter to respond to Poirier, also managing to take a jab at UFC lightweight champion Charles Oliveira along the way.

“I just talked to the UFC,” Diaz wrote. “I said wassup with the [Dustin Poirier] fight. I wanna fight ASAP but they said Dustin sucks and they don’t want it

“Sorry Dustin you suck. Hope to fight ASAP tho, let’s do this. P.S Olivera you suck too.”

Poirier and Diaz were first on a collision course back in 2018 in a scheduled bout at UFC 240, but the fight fell apart in the weeks leading up to the event.

Ever since that time, Poirier and Diaz have continued to circle each other as possible opponents, though the UFC has never actually booked the fight again.

Diaz is currently competing with just one fight left on his UFC contract and hasn’t reached any kind of an agreement with the promotion on an extension. Meanwhile, Poirier is coming off a third-round submission loss to Oliveira at UFC 269 in his bid to become undisputed lightweight champion.

While this latest attempt to book Poirier against Diaz didn’t come to fruition, there’s always the chance that the UFC will try again with a different card later in 2022.