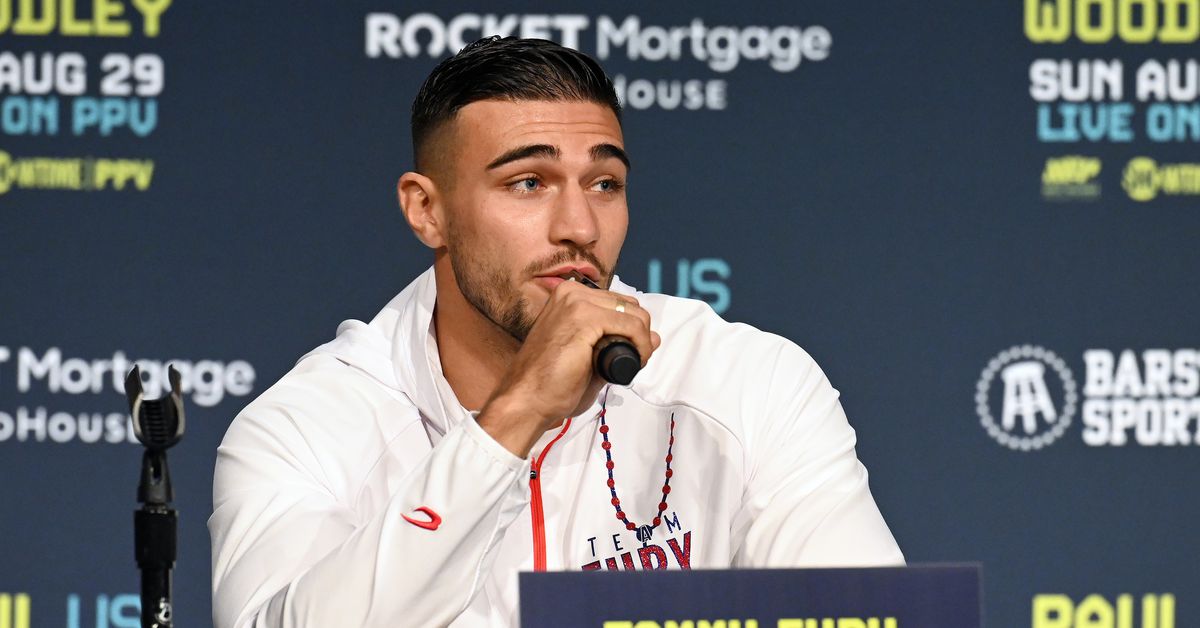 Tommy Fury believes he has unfinished business with Jake Paul — and he’s sick of getting blamed for a mishap that he says was out of his control.

Fury has been the subject of ridicule from the YouTuber-turned-boxer since withdrawing from the pair’s originally scheduled Dec. 18 boxing match because of a broken rib and chest infection he suffered in camp. With Fury sidelined, Paul instead rematched Tyron Woodley on pay-per-view and knocked out the former UFC welterweight champion in highlight-reel fashion in the sixth round of an otherwise lackluster fight.

Appearing Wednesday on The MMA Hour, Fury responded to Paul’s accusations of running scared and criticized the product that Paul and Woodley both left behind in his wake.

“Anybody for a second who thinks that this is all fake and bullsh*t, they can think again, because why on earth would I pull out of this fight? I was getting paid handsomely and I am used to fighting real fighters,” Fury told The MMA Hour host Ariel Helwani.

“For the rest of my career, I’m only going to go and fight killers when I get to that stage, so why would I be pulling out of this? It doesn’t make any sense. And for everyone who watched the first six rounds, didn’t just watch the knockout — for everyone who watched the first six rounds of that fight can understand, there’s no way that I would’ve pulled out of this fight, because that was probably the worst six rounds of boxing that I’ve ever watched.”

Fury (7-0, 4 KOs) admitted that it was tough for him to watch Paul vs. Woodley 2 after losing out on an opportunity to settle the pair’s rivalry. The 22-year-old Manchester native vowed that if it had been him in the ring in December instead of Woodley, he would’ve stopped Paul within the first four rounds.

He also lambasted Paul for looking worse in the rematch than he did in the first Woodley fight last August, which Paul won via split decision.

“Honestly, it was appalling to watch,” Fury said. “And even the commentators, I don’t know what round it was, said, ‘This is getting hard to watch now.’ And they were joking between themselves during the fight saying, ‘Oh, I wonder who won that round? Well, nobody. Nobody threw a punch. Nobody.’ It looked like they were trying to shadowbox in front of each other. No one wanted to commit. No one wanted to do anything. That fight was just really about one punch. But as far as the six rounds go, that was the worst six rounds.

“There’s no head movement. There’s no thought there. He’s a raw novice.”

Fury is still recovering from his injuries but said that he expects to be medically cleared soon. His sights remain squarely fixed on a fight against Paul and he plans to be ready to compete as soon as March. If he was in Paul’s shoes, Fury said, he’d be motivated to set the record straight and reschedule their booking so Paul can prove that he can stand toe-to-toe with an actual boxer rather than an athlete crossing over from another sport.

That being said, Fury also said he hopes to compete four times in 2022, so he isn’t willing to wait around if Paul is going to drag his feet in committing to the match.

“Make no mistake, that’s the fight I want next,” Fury continued, “and I’ll always be checking in with my team every single day to see where we’re up to with that. But there comes a time where I have my own career. My goal still isn’t changed. My goal is to be a champion in this sport. And believe it or not, fighting Jake Paul, it doesn’t give me that at all. Fighting Jake Paul will never make me a champion in boxing. So Jake Paul, yes, it’s a great fight. It’s a big fight. But it doesn’t really make me achieve my dreams. So at the end of the day, I’ll wait for a certain amount of time, I’ll try my best to get this fight back on track. You talk to everybody, this is the fight that I want. But at the end of the day, my career goes on.”

Fury added that he believes the bout still makes sense on several levels — and if nothing else, because he’s the biggest fight available to Paul at the current moment.

“At the end of the day, this is the fight for Jake Paul to make to prove whether or not he’s a legitimate boxer and can be a legitimate contender in this game.”