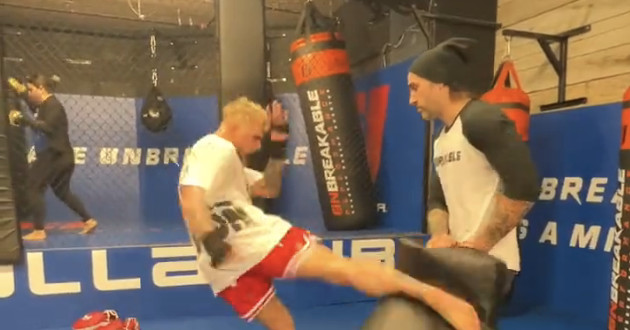 Jake Paul is certainly trying to make it look like he’s ready for MMA.

The social media influencer turned boxer on Friday released a video where he practiced low kicks on pads at the Unbreakable Performance Center in West Hollywood, Calif.

“1st day training kicks,” he wrote. “Doubted every step of the way.. but kick down the doors of the doubters.”

Paul tagged the Twitter accounts of Bellator and PFL in an obvious nudge at the UFC, whose president Dana White recently jousted with him on social media. A longtime critic of the MMA promotion and its leadership, Paul tweeted a wager that he’d retire from boxing if the UFC increased fighter pay and White gave him a fight in the octagon. White and the UFC did not meet the deadline he attached to his offer.

Paul is less than one month removed from a knockout win over ex-UFC champ Tyron Woodley in a rematch of their meeting this past August that he won by split decision. The concussive win touched off another round of jabs from Paul to the UFC, with the YouTuber saying he “embarrassed your whole company.”

Along with his video, Paul took another shot at the UFC exec over another hike in pay-per-view prices.

White repeatedly has dismissed Paul as a sideshow attraction. In a video, he challenged Paul to random steroid testing for the next two years in exchange for being tested for cocaine, an insult the YouTube lobbed at him.

White also took aim at Paul’s manager, former UFC CFO Nakisa Bidarian, whom he called a “scumbag” and a “Warlock.”

At least one promotion was paying attention to Paul. Shortly after his tweet, the tournament-based PFL weighed in.

Watch BROADENED HORIZIN — Feat. Dodson, Inoue, Motoya
Luke Rockhold rips Jake Paul fighting Tommy Fury: ‘He’s about as much of a boxer as I am a cricket player’
‘I Regret Not Being This Monster I Am Again’
Alexander Volkanovski doesn’t want to hear excuses about no Khabib after he wins at UFC 284
Cody Garbrandt Gets New Opponent For UFC 285 Return