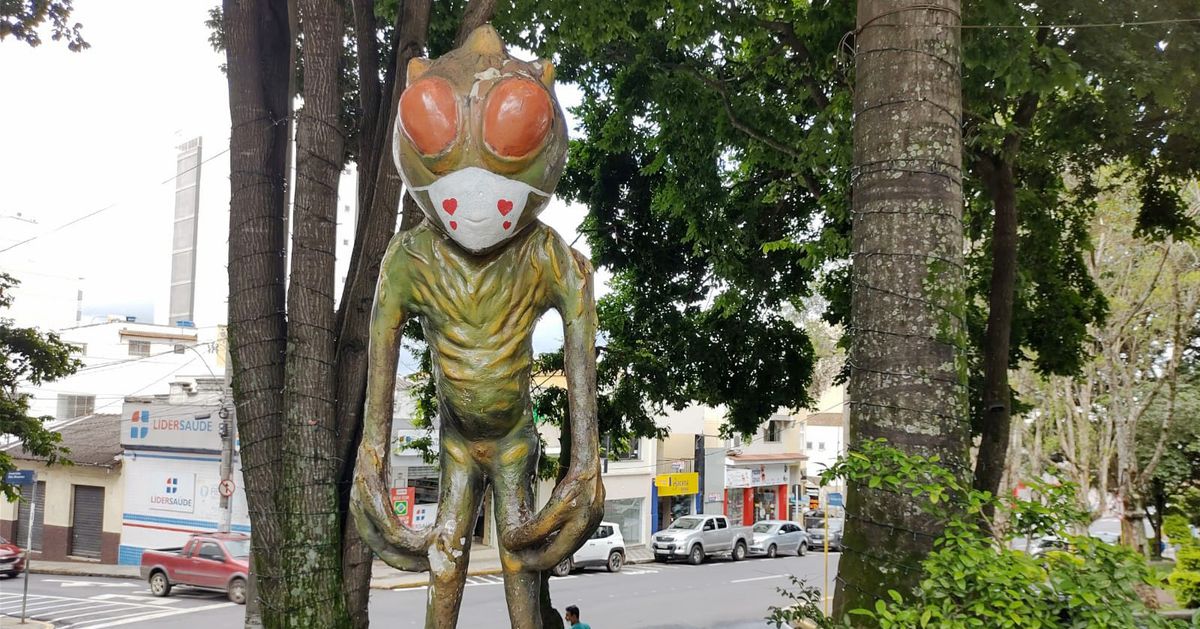 Amanda Ribas is the most popular UFC fighter from Varginha, Brazil. But she’s not what the town is best known for.

Many believe an extraterrestrial creature made an appearance in the area in the 1990s. The supposed sighting turned Varginha into a UFC hot spot for decades.

On Jan. 13, 1996, several people reported seeing a UFO over farms around the town. It looked like a gray bus, but it was quiet and had no lights, a couple said. The craft allegedly flew over their farm for over 40 minutes. Then a man driving on the freeway allegedly saw the same flying object fall from the sky. When he drove in that direction to help victims of what he believed was an airship crash, he alleged police officers and the army stopped him from getting any closer, telling him to forget what he had seen.

On Jan. 20, a pregnant woman named Katia Xavier was taking a shortcut home with her teenage friends Liliane Silva and Valquiria Silva when they allegedly saw a creature like no other. It was brown, stocky, apparently soft and had two big red eyes, they told the media at the time. They immediately ran in fear. A neighborhood man told reporters that firemen showed up and took “that weird animal” away.

“There’s no way it was human or any other animal,” Xavier told local TV network EPTV 10 years later.

In the following months, the city zoo registered several deaths. Veterinarians were unable to discover the cause. Deers, tapirs and ocelots died due to an “unidentified toxic-caustic substance,” they said at the time.

Local authorities and the Brazilian army never confirmed any of these stories.

Ribas often does her training camps at Florida’s American Top Team, but she prefers to stay in Varginha most of the year working at her family’s gym. She was only 3 years old when the incidents allegedly happened. Still, she has plenty of theories about what happened.

“My grandmother says she saw [the creature] walking down a hill and tried to feed it,” Ribas said on MMA Fighting’s Portuguese-language podcast Trocação Franca. “She saw it in the woods and even fed it. There were studies made in this forest, too.

“My father doesn’t believe it. He thinks it was an unemployed reporter that saw a weird animal around the same time that movie E.T. came out and said there was an E.T. He scared some girls in the street and police were called and everybody showed up. There are some theories, right?”

E.T. was released 14 years prior to the alleged incidents. Another film, “Aliens,” released in 1986 and directed by James Cameron, got Ribas thinking.

“I don’t think we’re alone in the [universe],” she said. “And why not land here [in Varginha], right? I believe it would be selfish of us to think we’re alone [in the universe]. I never had any proof, I’ve never seen it, but it’s not like I believe or disbelieve.

“Who knows, maybe I say I don’t believe and something pulls my feet at night. [Laughs.] I don’t know, a green light pops at my window. There are a lot of trees in front of my house, and I sleep with the window open. It’s all dark, just two green eyes [looking at me]?”

A third incident happened in Varginha seven months after the 10-year anniversary of the alleged UFO sighting. A woman was getting her breakfast ready when a cow blasted through the roof and fell inside the kitchen. People immediately tried to connect the incidents, believing that extraterrestrials were trying to transport a cow in a spaceship.

“People say a ship was trying to catch the cow,” Ribas said.

This time, however, there was a simple explanation for it. The house was on a hill, so the cow simply walked from a higher lot over the roof, falling right inside the kitchen.

Michael Chandler will fight anyone, anytime, anywhere!
Bellator 290 predictions
‘A catapulted, catalytic opportunity to grow again’: The UFC’s return to Australia is not before time
Dominick Cruz Ranks his Top Five Title Fights From the WEC Era
Cody Garbrandt Gets New Opponent For UFC 285 Return