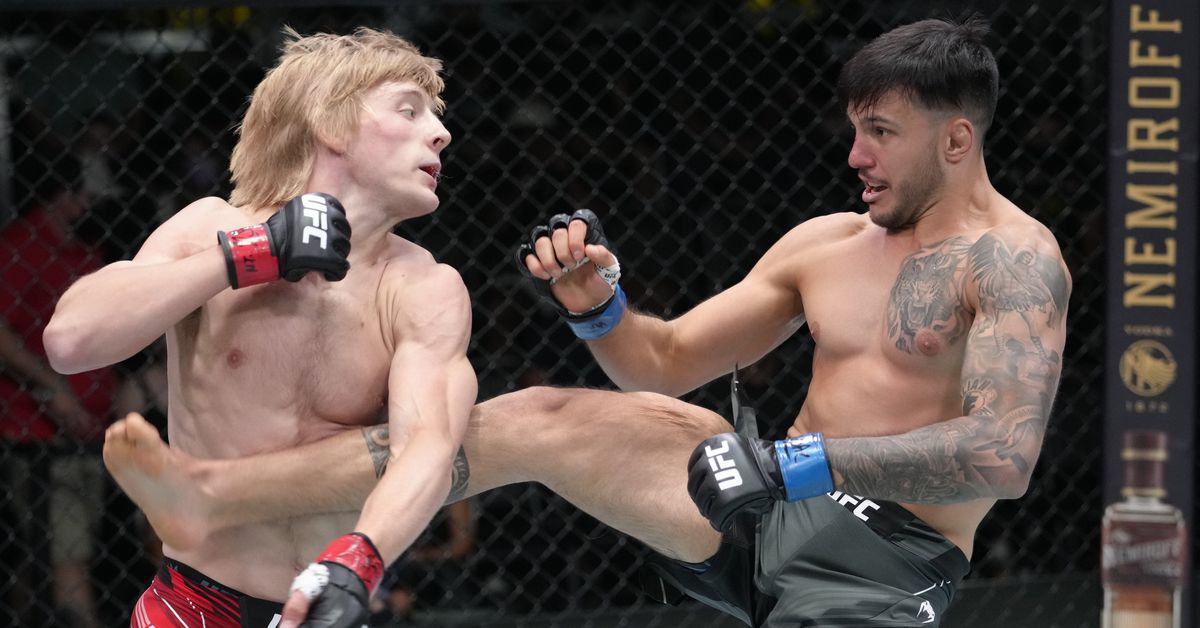 Paddy Pimblett is already eyeing a fighter vs. one of the best Lightweights on the planet.

The former Cage Warriors champ made his UFC debut in September vs. Luigi Vendramini, drubbing the Italian en route to a first-round knockout win. However, it wasn’t an easy win, as Pimblett took some big shots before turning the tide. All in all, it was a dramatic affair, one that helped earn Pimblett a great deal of attention, as well as a highly lucrative contract with Barstool Sports.

Debut win aside, Pimblett has a long ways to go before he’s in the title picture at 155 lbs. He even acknowledged as much a couple months ago, expressing more of an interest in taking the Sean O’Malley route to the top … but it won’t stop him from speculating on his odds opposite the current crop of elite Lightweights.

Speaking with Michael Bisping on his Believe You Me podcast, Pimblett found a lot of confidence in his chances vs. Dustin Poirier after watching Charles Oliveira strangle him.

“I went with Poirier over Oliveira,” Pimblett began (via Harry Kettle). “And lad, after watching that fight as well, I’m watching that thinking, ‘Lad, if Oliveira can do that to you Dustin, I can.’ It’s mad like, when you watch (it), MMA math doesn’t work, but when you watch fights, you’re just like, ‘Wow, if he can do that and get in that position, then f—king I can.’”

Delusion or confidence? They’re often two sides of the same coin with hyped up-and-comers. Pimblett is a back control specialist, but he’s still far unaccomplished compared to the current champion “Do Bronx,” who’s submitted more foes than anyone else in UFC history.

Pimblett remains unbooked heading into 2022, and he’s still several wins away from a fighter like “The Diamond.”

Gilbert Burns vs. Khamzat Chimaev is a kickass match up, and the two have agreed on Instagram to an April 9th showdown.

It’s hard to imagine why UFC has a piracy problem when it costs roughly a grand to keep up with the sport.

Josh Emmett is hoping to replace Max Holloway, and my fingers are crossed it somehow works out that way.

John Wayne Parr details his scary experience with COVID-19. The Australian may not be the youngest man in combat sports anymore, but he’s still in better shape than the vast majority of us …

A pair of unique training setups:

A quick look at Canelo and Ryan Garcia sparring!

Prior to his UFC success, Giga Chikadze cut his MMA teeth in Gladiator Challenge, and this is the standard. If you ever want a surreal experience, go to one of their events and watch 15 fights end in 75 minutes total!

Regional fights are starting back up! Here’s the first KO clip from 2022 posted in this column.

Keep an eye out for buffalos during your next dining experience.

Security footage shows a runaway buffalo plowing into a restaurant in China & knocking over a man inside. The man only received treatment for minor leg injuries. According to local reports, the animal escaped from a local slaughterhouse before bulldozing into the restaurant. pic.twitter.com/NDorfB5bxt