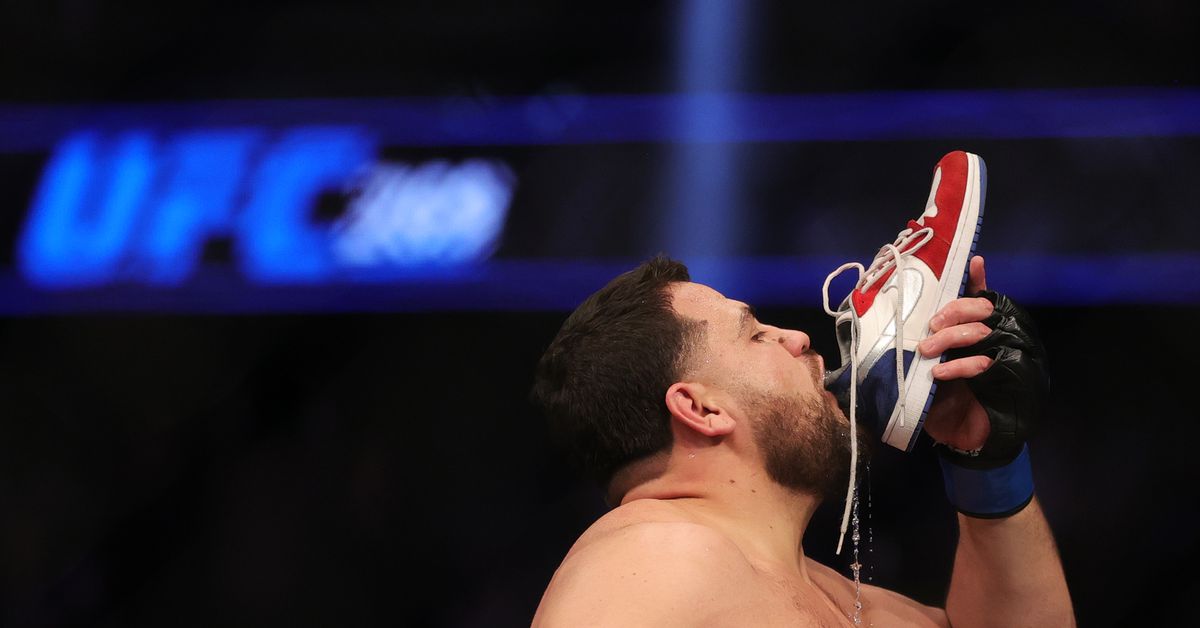 UFC heavyweight Tai Tuivasa is now known for his shoeys, so leaping onto the cage to pound a beer through his shoe — or any shoe, for that matter — is a good hat tip to his fans, just like a Roy Nelson belly-rub.

But there’s another, more expedient reason Tuivasa does as many shoeys as he can: It’s the first time he’s drank alcohol since before his fight camp.

“That’s why I try to do as many as I can before I get out of [the arena] and see how pissed I can get.”

If you’re around Tuivasa on fight night, it’s best not to get in the way of his shoey. A Nevada Athletic Commission official found that out when he tried to end the Australian’s celebration early after a knockout win at UFC 269.

“I had a bit of an argument with one of the guys, really pushing me out of there and really putting me off,” Tuivasa explained. “I feel that the fans come to watch me to knock people out and do shoeys, and I’ve got some guy who’s not even a ref and doesn’t work for the UFC, he’s f*cking pushing me in the back and trying to get me out of there. C’mon, man.”

Tuivasa is now in the process of monetizing his signature by mass-producing a shoe-shaped beverage delivery device. Fans will soon be able to chug a beer (or other drink of their choice) from a tap that runs out of the front of a shoe that fits over the beverage — in other words, a shoey dispenser. Tuivasa also has produced a beer with Tyson Pedro should fans want the official experience.

The next time Tuivasa gets the chance to hop up on the octagon, it should be a lot easier (and perhaps less messy) for a post-fight shoey. He’ll still do them with fans as he exits the arena, of course.

There’s still one dream shoey partner for the fun-loving Tuivasa, who entered the T-Mobile Arena in Las Vegas to “Barbie Girl.” If he ever sees Leonardo DiCaprio, he’s bringing his dispenser.

“That’s my guy,” Tuivasa said. “I love what he does. I love his movies, and I just think he’s just the sh*t. I’d love to hang out with him.”