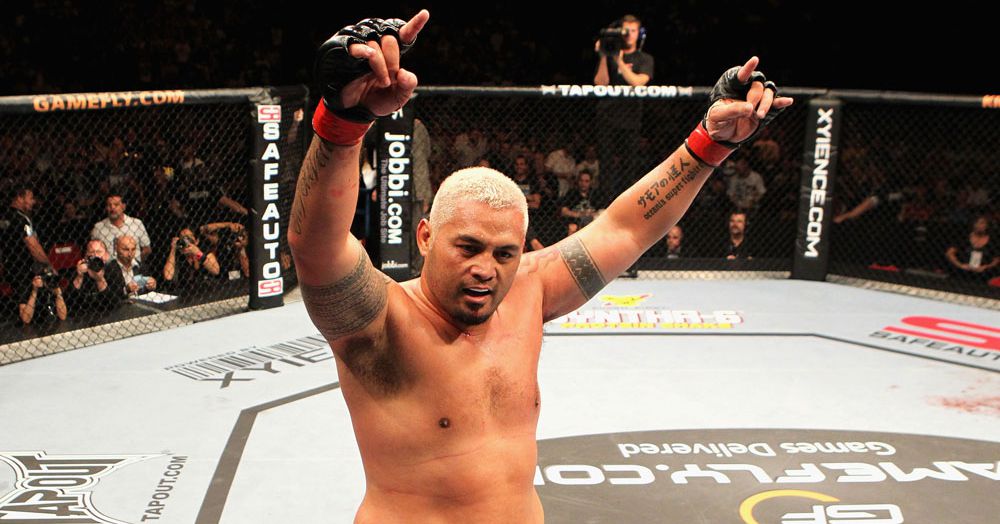 Mark Hunt once competed for an interim championship at UFC 180, but three years removed from his last fight for the promotion, he questions what was truly on the line for him title fight.

“The Super Samoan” appeared on The MMA Hour on Monday to speak about his ongoing legal battle with the UFC and the ongoing issues he sees with the promotion’s pay structure. A 14-year veteran of professional MMA who competed 18 times for the UFC, Hunt doesn’t believe that the top fighters in the sport necessarily understand the stakes of their careers.

“I support all the guys that I’ve helped train with and that helped me train to get where I was, I’ve tried my best to help all of those guys,” Hunt said when asked if he still watches MMA. “But I don’t like watching UFC or fighting in general, because I know what it’s like at the top. I know what they’re fighting for, which is nothing. They’re fighting for nothing. I’m the world champion of what? Explain to me what you’re the world champion of.

“If you’re the world champion of boxing, there’s reality. You have made it to the top, you don’t have to worry about money, don’t worry about nothing. There’s the goal to reach. Mount Everest. But in the UFC, you make it to the top, what do you get? Look at the champions. Don’t look at what I’m saying, look at the champions in the sport, what have they got? They’re sitting there complaining about money. You’re the world champion of nothing.”

In Hunt’s case, the conflict between he and the UFC went to court in 2017 when he sued the company following a loss to Brock Lesnar at UFC 200 in July 2016. Lesnar later failed a pair of drug tests that led to their bout being overturned to a no-contest, and Hunt filing a RICO lawsuit against Zuffa, LLC and the UFC for alleging conspiracy to commit a crime related to racketeering, fraud, false pretenses, breach of contract, breach of covenant of good faith and fair dealing, negligence, and unjust enrichment. Those charges were dismissed in February 2019 in Nevada court, but Hunt’s team issued a successful appeal and will soon take the lawsuits claims of fraud, battery and civil conspiracy back to court.

Hunt, 47, explained further why he is so invested not just in pursuing his own lawsuit, but in furthering the cause for improved bargaining power for fighters as well.

“It’s a fight for proper pay, what the top-end boxer gets,” he said. “Like Joseph Parker, Tyson Fury, Anthony Joshua, all these top-end boxers, Canelo, when they make it to the top they split half of the revenue automatically. Whereas a UFC fighter has to say, ‘Can I get a dollar off the pay-per-view? Can I get 50 cents?’ … This stuff really annoys me, because it’s taken my fighting career and I felt that as I was competing in there. I felt when I was competing in the UFC I just lost all love and interest because what is the purpose of this?”

All that said, Hunt doesn’t fault his peers or the majority of the UFC roster for not jumping into the deep end with him in the battle for better fighter pay. He understands that many active fighters are satisfied with their compensation, but he wishes that they would consider the power that they would have if they joined together and asked for even more money.

“I can’t tell fighters to join the cause because they’ve all got bills and mortgages to pay,” Hunt said. “I understand their situation. It’s not up to them to just give up and say, ‘Aw man, I’m gonna come and support.’ The power that all the fighters have, it can’t be beaten. If all the fighters got together and said I don’t want to fight for this company no more, there’s no UFC. I’ve said this many years ago. This company thinks it’s got all the power and that’s what all these fighters have been led to believe, but if these fighters realized that they have all the power and all of them just need to say, ‘No, I want 50/50 for pay-per-views, I want the Ali act, and I want all these things,’ then things will change in an instant because without these fighters there’s no UFC.

Hunt’s name recently came up in headlines when it was reported that he has officially been ordered by U.S. District Court in Nevada to pay Zuffa almost $400,000 in attorney fees and costs, to which he responded by challenging UFC President Dana White and former UFC executives Lorenzo and Frank Fertitta to a fight.

Hunt added that should the UFC side win, he’d drop his lawsuit completely. But if he won, then the UFC would have to “pay every fighter you ripped off.” That includes retired competitors, who Hunt feels have really suffered from not being paid what they’re worth.

“Why can’t the UFC pay for it? Because they’re not employees. They’re subcontractors. That’s a belt not worth fighting for. It’s not worth losing sleep or blood over, but it’s come at a cost.”

Hunt’s last combat sports appearance was a six-round boxing match against former rugby league standout Paul Gallen in December 2020, which hw lost by unanimous decision. He does not expect to fight again, at least not in MMA.

A popular fighter despite never having won a major MMA title, Hunt has a word of advice for any athletes looking to step into the cage in this current climate.

“Get a job,” Hunt said. “Get a normal job, man. Be like everyone else.

“Until things change with the UFC, until they start looking after their fighters, pension, health insurance, better pay. And people compare a normal job’s pay to what they do for a living. It’s not the same level. You’re not getting beat up in front of the whole planet for an income, but to be able to compete at the highest end it’s just different. I feel right now with the fighters, if they want to be a fighter, it’s not a good idea right now. It’s just not the right time.”