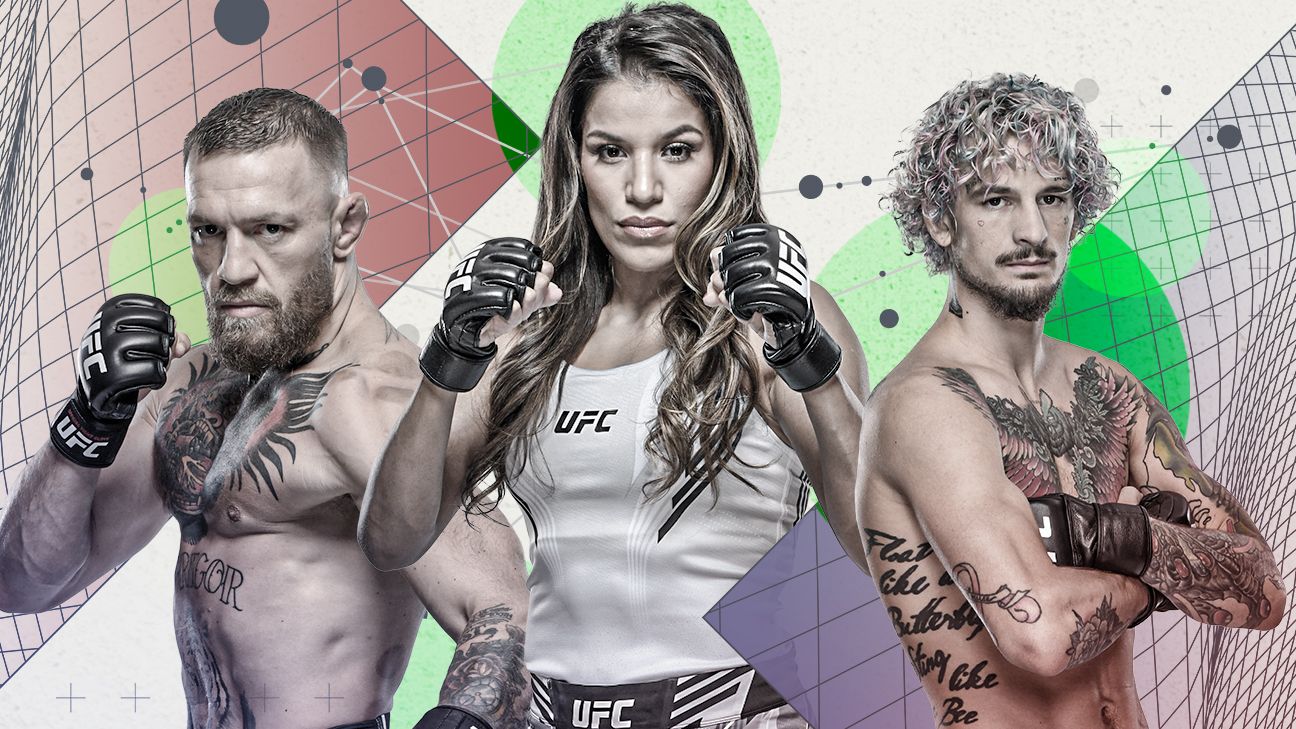 On the eve of the UFC’s return to action with its first card of 2022, and a stretch of fights that will in many ways shape the rest of the year, there is potential and excitement in the air throughout the MMA world. But when the dust settles at the end of 2022, who will have had the best year?

A two-step voting process involving ESPN’s MMA contributors set out to project which 30 fighters will show out the most in 2022. The final list features fighters from three promotions — veterans and rising stars, champions and contenders — ranked by their potential for success over the next 12 months

A lot can change over the course of a year, and the fight game can be unpredictable. From 30-21 alone, five fighters who didn’t crack the top 30 in 2021 qualified, and three who were in the top 15 dropped into this third tier. Brett Okamoto, Marc Raimondi and Jeff Wagenheim have a lot to say about these 10 fighters.

Follow the link to each UFC result to watch a replay of that fight on ESPN+. Fighters 20-11 will be revealed on Thursday, and 10-1 will be released on Friday.

2022 outlook: Anderson’s time has come — again. As recently as two years ago, he was on the verge of reaching the top of the UFC’s light heavyweight division, riding a four-fight winning streak that included a victory over current champ Glover Teixeira. It was a different future champion who halted Anderson’s ascent, as Jan Blachowicz knocked him out in early 2020. Next stop: Bellator. Anderson has knocked out his first three opponents inside their circular cage, most recently a 51-second demolition of ex-champ Ryan Bader in the Light Heavyweight World Grand Prix semifinals in October. That puts him in an as-yet-unscheduled finale against champion Vadim Nemkov. A championship is within Anderson’s reach — finally. — Wagenheim

2022 outlook: The bodacious talk and Technicolor hairdo are attention-grabbers, which means that lots of fans have been watching as O’Malley has produced slick knockouts, which he has done in his last five UFC wins. But not one of those finishes has come against an upper-tier opponent. This is a forward-looking ranking, and O’Malley’s sizable following ensures that the UFC will lay opportunity at his feet in 2022. Will “Suga Sean” step up and make the most of it to become worthy of being included among the sport’s best? We’ll see. — Wagenheim

2022 outlook: Covington is an interesting one going into 2022. On one hand, he’s ranked No. 2 in the UFC’s welterweight division, behind only the dominant champion, Kamaru Usman. And he has a potentially massive fight in front of him in the form of a grudge match with Jorge Masvidal. But on the other hand, he’s lost to the champ twice. A title shot seems distant as long as Usman holds the belt. And he only has one win in the past two years. In other words, this could be a make-or-break year for Covington. There’s a path for him to have a great year, and it probably starts with beating Masvidal. But any kind of setback in 2022 will be a big blow to Covington’s long-term outlook in this division. — Okamoto

2022 outlook: Aldo’s late-career renaissance has been one of the best stories in MMA and has hopefully clued in newer fans to the Brazilian’s greatness. It was a long time ago now, but Aldo held the UFC/WEC featherweight title from 2009 to 2014 over seven title defenses. Those are incredible numbers, and Aldo should still be considered one of the top two featherweights in MMA history. Now at bantamweight, Aldo is surging again at age 35. He has won three straight and could be looking at a title eliminator next against TJ Dillashaw or Dominick Cruz, a pair of fellow luminaries in MMA’s lighter weight classes. — Raimondi

Next fight: April 9 vs. Petr Yan, for the UFC bantamweight championship (UFC 273)

2022 outlook: How can someone win a UFC title and still have a nightmarish year? That’s what Sterling dealt with in 2021. Sterling won the UFC bantamweight title from Petr Yan at UFC 259 in March when Yan landed an illegal knee. Though it was no fault of his own, Sterling took a ton of grief from fans (and Yan) the rest of the year for being perceived to be an illegitimate champ. Things only got worse when he was unable to make a rematch with Yan in October due to not being fully recovered from neck surgery. With Sterling vs. Yan 2 set to finally happen in April, Sterling will have the opportunity to silence his critics — but it won’t be easy. — Raimondi

2022 outlook: The UFC’s reigning light heavyweight champion enjoyed a magical year in 2021. He only fought once, but it was one of the best performances of the year, as he dethroned Jan Blachowicz in October to win his first championship at age 42. At one point in his career, the Brazilian veteran couldn’t get his career off the ground due to visa issues. Now, he’s a UFC champion. Quite a story. The question for 2022 is how long this story will continue. Teixeira has now won six in a row and is clearly showing no signs of slowing down. But … he is 42. He goes into this new year with a title around his waist and a target on his back. — Okamoto

2022 outlook: The future of McGregor, the biggest star in UFC history, is one of the biggest storylines coming into the year. McGregor suffered a broken tibia and fibula against Dustin Poirier last July and has said he will be cleared to spar in April. That could mean a return to the Octagon in July. Against whom? That’s a big question, though McGregor has made it clear he expects a title shot upon his return, even though he only has one victory since 2016. McGregor often does get what he wants because of his monstrous drawing power. But what that means for his 2022 is still not known. If McGregor is able to make a storybook comeback this year, the sport would be better off for it. — Raimondi

2022 outlook: Can this year possibly bring Poirier anything as dizzying as what he experienced during the roller-coaster ride of 2021? His two knockout wins over the sport’s shiniest star, Conor McGregor, situated Poirier at center stage among lightweights, but the year ended with the spotlight shining instead on Charles Oliveira and the belt around his waist. The obvious question is, where does Poirier go from here? After a year in which he set up his family financially, he also had his second crushing setback in his dream pursuit of a championship. Poirier is too elite for the UFC not to continue feeding him opportunities. We’ll soon find out if he can muster the drive to get back up and brush himself off for a push toward a third title shot. — Wagenheim

2022 outlook: This is just the way it is in combat sports. You pull off a major upset, against one of the greatest fighters of all time, and the first question asked of you is: Can you do it again? Peña capped off 2021 with one of the biggest upsets in UFC title fight history, as she submitted the great Amanda Nunes to win the UFC women’s bantamweight championship in December. Her greatest task in 2022 will be to beat Nunes again and leave no doubt she is the best 135-pound woman on the planet. If she is able to accomplish that, she will literally change the landscape of the entire division. It would create new opportunities and matchups throughout the division. Let’s see what happens. — Okamoto

2022 outlook: This could be just another year of Cyborg dominance, or it could produce her greatest triumph ever. And that wild swing of fortune is not within her control. If the Bellator women’s featherweight division stands pat, with Cyborg as champ and no one else on the roster being on her level, 2022 promises a couple of uncomfortable Cyborg maulings unless some challenger goes all Julianna Peña on our expectations. But if Scott Coker can add one more contender at 145 pounds, it would be a game changer — as long as that contender is Kayla Harrison. Based on the lowly competition Harrison faced in her two championship seasons in the PFL, we have no idea whether she is on Cyborg’s level. But she could be, and it sure would be fun to find out. — Wagenheim

Leon Edwards will give Jorge Masvidal a title shot if Masvidal wins at UFC 287: ‘Let’s get in there and settle it once and for all’
‘This is the happiest time for me’: Inside Fedor Emelianenko’s last hurrah in MMA
The Wild World of Fighting: Paula Felder, Cursed Michael Bisping and GSP, & More (2/4/23)
Bellator 290 Ceremonial Weigh-in: Ryan Bader vs. Fedor Emelianenko
Mike Perry to act as back-up for Tommy Fury in Jake Paul fight