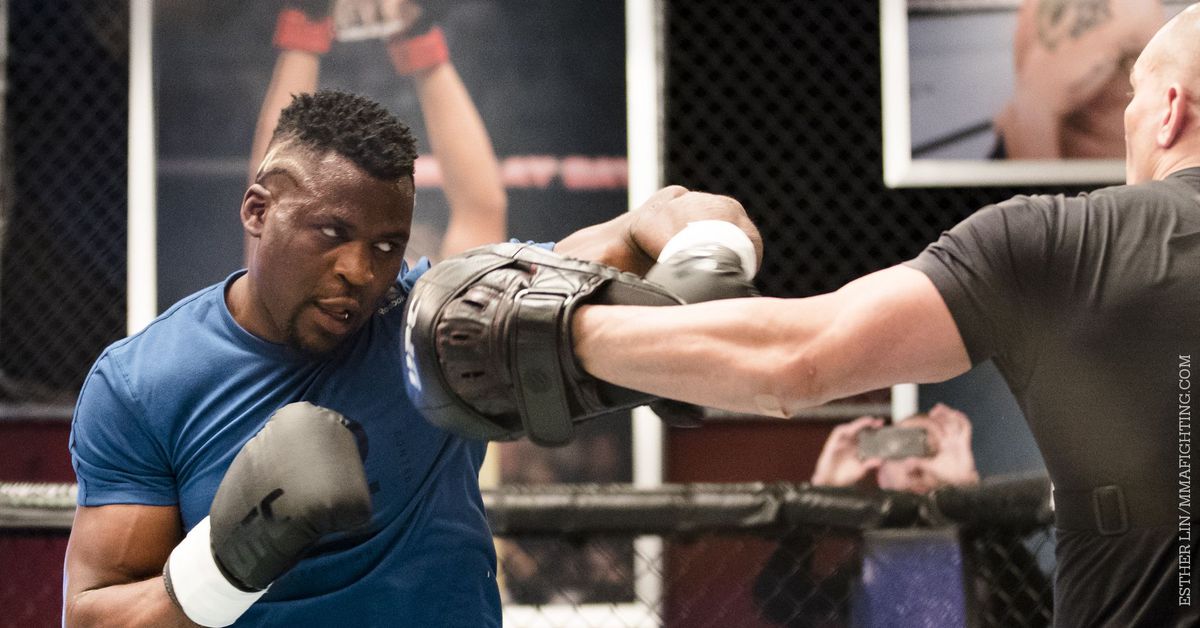 Though we are early into 2022, it’s already looking like UFC heavyweight champion Francis Ngannou is going to have an eventful year.

Ngannou is currently set to defend his title against interim champion and former training partner Ciryl Gane at UFC 270 next weekend, but despite having a title defense in his immediate future, “The Predator” is also keeping his eyes on what comes after, and for Ngannou, hopefully that will be a cross-over fight against current boxing heavyweight champion Tyson Fury.

Earlier this month, Fury called out Ngannou for a boxing bout in MMA gloves inciting a brief exchange between the two over social media. The exchange piqued the interest of fans and oddsmakers even came out with a betting line on the speculative contest. And given the amount of interest all parties have shown in the fight, Ngannou believes that eventually he will get his wish to compete in the squared circle.

“Yeah, I do believe that that fight will happen,” Ngannou told DAZN Boxing. “I think Tyson Fury wants that fight to happen too, so eventually it will happen at some point. I can’t say specifically when but for sure it’s gonna happen since we both are willing to make that fight happen.”

Ngannou has long held an interest in boxing, having originally started training in the discipline before pivoting to MMA. UFC President Dana White, however, has notoriously been against allowing fighters under contract to compete in boxing bouts, with the notable exception of “The Money Fight” between Conor McGregor and Floyd Mayweather Jr. in 2017. But with Ngannou currently on the last bout of his UFC contract, the heavyweight champion finds himself in a position to negotiate and earlier this month, Ngannou made it clear that “boxing part has to be” in his next UFC deal. Now with Fury having shown an interest in facing him, the heavyweight champion has doubled down on that notion, saying that he doesn’t have that much time left in his combat sports career and he wants to make the most of it.

“It’s not like freely go have a boxing match but more so I would like something like Conor and Mayweather did,” Ngannou explain about his contractual requirements. “I think it would be more viral with the supporting that, with the UFC behind that. Anything that you do with the UFC behind, I think it’s gonna be huge…

“From where we are, nothing is safe to say…. Yes (no boxing is a deal-breaker). I’m 35 years old, bro. It’s not like I have a lifetime ahead of me. I’m very aware of my age and the stage of my career and if I really want to do this, I think it’s time to do it. But I don’t see why that shouldn’t be possible for them as well.”

But before any of this can really come into play, first Ngannou has to settle up with Ciryl Gane. Though the former training partners have both been reasonably respectful of each other in the build up to their fight, things have also begun to get a touch more pointed as the bout nears. Earlier this week, Gane remarked on the now infamous snub he received from Ngannou at UFC 268, calling it “wrong” and “disrespectful,” claims that Ngannou dismissed before essentially saying they can settle it in the cage.

“My thinking was that I couldn’t just go there and greet him without greeting his coach which is a guy who has been out there, saying sh*t on me,” Ngannou said. “I can’t look it and pretend like everything is going well. And it doesn’t matter. At the end, we are going to fight. We both are going out there trying to take each other’s heads off. It’s not a friendly relationship. We are not a co-worker that meets in the office in the morning and has to say “Hey” to each other, you know?…

“As with every fight, my result is the same: my prediction is a knockout.”

Dana White Lookin’ For A Fight.

Most Heartfelt UFC Moments of 2021.

These two still going at it. And in the weirdest way possible.

Actually we were told that the fight was moved to April 9 so they could have a backup ready when you pull out again bitch https://t.co/EOwH9agRm2

The fact that you’re delusional enough to think another fighter is “bitching out” against you tickles my balls more than it will when I drop them on your face April 9th.

Every last word you say will be hilarious to say to you as I piss pound your face from full mount. #Receipts https://t.co/3i9cYfweTV

.Now stop sucking me and wait the extra weeks you needed like the good lil thot you are @PetrYanUFC

Brian Kelleher on the change.

What a truly horrible idea.

Had a female @aew wrestler show up to my MMA gym this morning and challenge me to a closed door match…of course I accepted.

Reminder: this is a UFC champion.

Technically it would be within the means then. But I get what you’re saying. I’m not there with my paychecks yet and I have no intention to pretend to be living like that.
Catch me on that commercial flight in the back seat in economy! https://t.co/2pekmKDpi1

Movsar Evloev says he was forced out due to COVID.

Happy to say I’ve resigned my PFL contract for this season. Feel very blessed to fight for such a great organisation. Let’s do this pic.twitter.com/TW5pNJz5G7

Aljamain Sterling and Petr Yan is entering this territory.

Thanks for reading and see y’all tomorrow.

So, is Ngannou right? Will he box Tyson Fury?