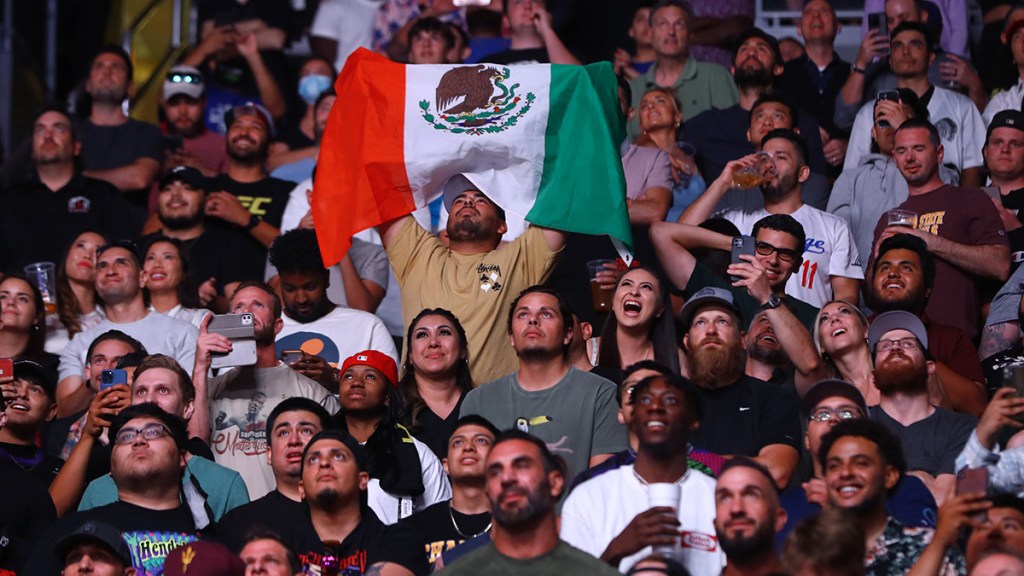 Aside from Mexico, perhaps the closest that UFC flyweight champion Brandon Moreno could get to a proverbial home game is fighting in Southern California.

According to the latest U.S. Census Bureau numbers, Hispanics account for roughly 48 percent of the population in Los Angeles County and 34 percent in neighboring Orange County, which hosts Saturday’s UFC 270 at Honda Center in Anaheim.

With a heavy Hispanic population comprised mostly of Mexicans, Southern California might be the perfect place for the first Mexico-born UFC champ’s first title defense when Moreno takes on Brazilian Deiveson Figueiredo in the co-main event of Saturday’s pay-per-view.

Honda Center was the site of Cain Velasquez becoming the first fighter of Mexican descent (as a Mexican-American) to win UFC gold October 23, 2010. On that night, Velasquez TKO’d Brock Lesnar to claim the heavyweight belt, much to the delight of the abundance of Hispanic fans among the 14,856 in attendance.

Moreno, who lives in Tijuana along the U.S.-Mexico border near San Diego, expects that same kind of support against Figueiredo and hopes to recreate the atmosphere with another win.

“The Mexican people in Anaheim, in that area, in all of Los Angeles, it’s incredible,” Moreno told MMA Junkie Radio. “A lot of Mexican people there. I can feel even right now all the support of the Mexican people. And another detail, Tijuana is very close to Anaheim, to the Honda Center. Maybe with no traffic, it’s less than two hours (to drive). I know a lot of guys from Tijuana who are going to the Honda Center that night to support me. I’m excited, man. I’m excited to feel that good vibe that night. I felt it in Arizona when I won the title, and I know this time will be the same or even better.”

Moreno made history by winning the title with a submission of Figueiredo in front of a large contingent of Mexican fans at Gila River Arena in Glendale, Ariz. Saturday’s fight marks a trilogy between the two men after they fought to a draw in December 2020.

Moreno has made it clear he’s focused on building his legacy as champion.

“It’s a second chapter,” Moreno said. “Obviously before the belt, all my mind was to get the belt, to be the champion, to beat Deiveson Figueiredo and be the first Mexican-born champion in the UFC – and that’s it. Now, what is next for me, definitely I need to build my legacy.

“I need to defend my title. I want to clean the division. I know it’s hard work to do because all the other guys in the division are hungry. Definitely they are ready for me, but I’m ready for the challenge. I’m training so hard for this next fight, and that will be my future.”

UFC 184: Chris Weidman vs. Vitor Belfort Staredown
If Joshua can’t get a title fight, he’d consider Ngannou
Top Finishes From UFC 268 Fighters
Marlon Vera vs. Cory Sandhagen shifts to UFC on ESPN 43 in San Antonio
Neiman Gracie going back to jiu-jitsu roots for Bellator 290 to ‘bounce back’ after tough losses