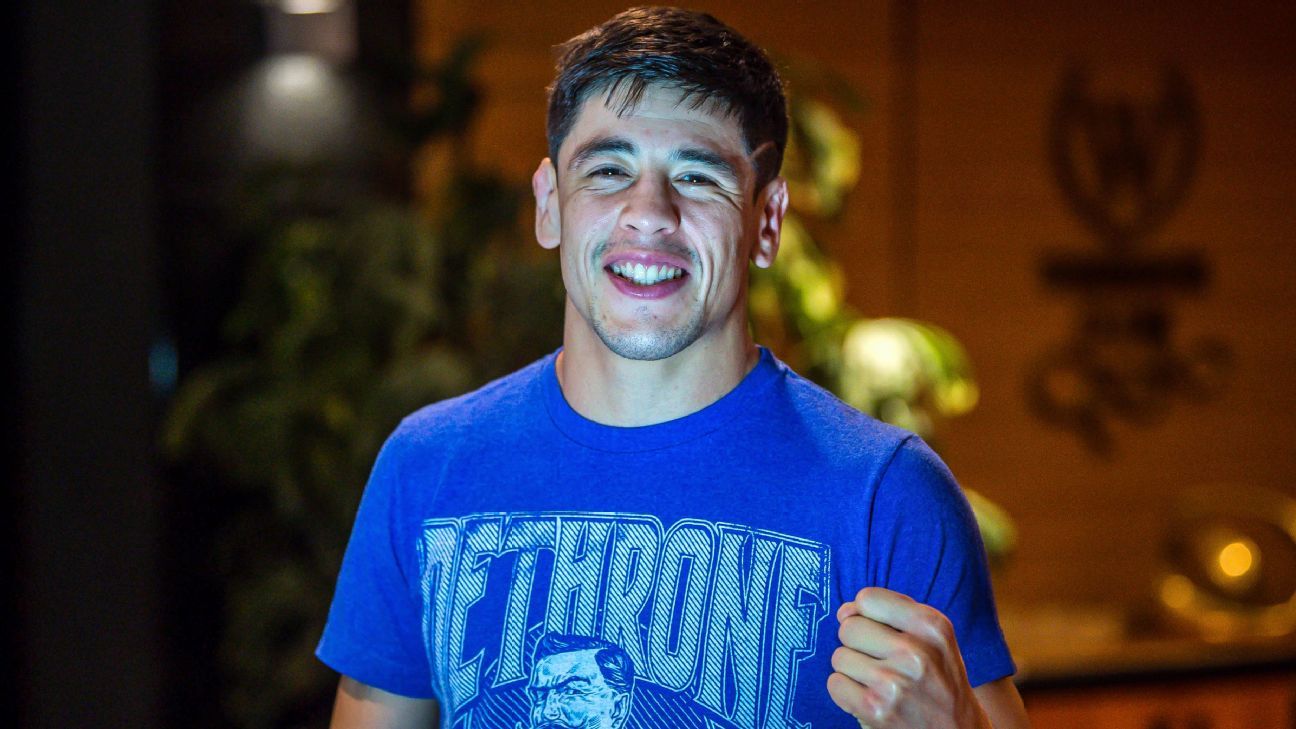 Editor’s note: This story was originally published ahead of UFC 256. It has been updated to reflect the result of that fight and the upcoming trilogy fight at UFC 270.

The half-made piñata would be sitting on the floor of Pinatas Moreno in Tijuana, Mexico, and business owner Alfredo Moreno would not be happy.

The job was not done, and his son’s other interest was probably to blame.

Brandon Moreno started his mixed martial arts training when he was 12, at the same time he was working part-time at his family’s business. One was a job. The other was a passion. But they both helped shape the athlete who became the first Mexican-born fighter to win a UFC title at UFC 256 when he defeated Deiveson Figueiredo. He defends his title on Saturday in a trilogy fight against Figueiredo at UFC 270 (10 p.m. ET on ESPN+ PPV).

The piñata business exposed Brandon to his parents’ work ethic, which has served him well in his improbable climb up the UFC rankings. The business also served as a financial life raft after he was cut by the UFC in 2018 and his newborn daughter needed surgery. Even though Brandon was never that good at making pinatas, his efforts in the family business helped him discover what he wanted in life.

“Every day I saw, always, how my parents worked so hard to give us the best opportunities and the best life possible,” Moreno said.

When Moreno started MMA training in 2005 at the age of 12, he was a “shabby” kid, he said. Chubby. When he was younger, his main hobbies after school were playing video games and eating junk food. At first, MMA started out as just a way to get some needed exercise.

That same year, Moreno started working part-time at Piñatas Moreno. Part of the work was done out of the family’s home, the other part at a small warehouse nearby. Moreno’s day consisted of school, making piñatas and then running off to training.

The more Moreno trained, the more he fell in love with fighting — the physicality and the competition. The initial plan was for Moreno to go to college, then law school. But it soon became clear that fighting wasn’t a casual interest.

“At first, I thought [MMA] was a distraction for him, a hobby,” said Moreno’s mother, Cecilia Carrillo. “I always wanted him to study, to go to college. It was very important for me that he do it so he could have a good life.

“But he never wavered, he was always training, and he really liked it. Ever since he was little, he started to map out goals for himself. He would always tell me that whatever he did in life, he’d be the best. ‘I’m going to be a lawyer — the best-est,’ he’d say to me.”

Moreno’s parents supported his decision to pursue fighting, rather than a higher education. But there was one requirement. In order to help pay for training and make ends meet, Moreno had to work at the family business full-time.

It was a busy schedule. Moreno would wake up in the morning, train for two hours, then come back home for five or six hours to make piñatas. After dinner, he’d go back to the gym for another two hours of workouts before finishing the night at the warehouse putting the finishing touches on the piñatas.

“I could make my own schedule, because I wanted to go and train,” Moreno said. “That’s why my parents helped me so much. … I started to make money by myself. I started to grow up, and I started to know hard work.”

Things didn’t always go smoothly. Moreno admittedly was never a very good piñata maker. The process, he said, starts with cardboard that gets pasted together with homemade adhesive — a combination of hot water and flour. Moreno said it would take him about 30 minutes to build a piñata. Alfredo sometimes grew impatient.

“He’d end up running Brandon out of the room, because he couldn’t do it,” Carrillo said with a laugh.

“I never had the right ability to make the piñatas, but it was a fun part of my life. I’m a better fighter than a piñata maker.”

The Morenos started the small business in 1997. There were many families making piñatas in their Colonia Guerrero neighborhood, said Carrillo, who also grew up making piñatas. The business took off a few years later when the family started selling piñatas across the border in San Diego and Los Angeles.

Alfredo, Moreno’s brother and another worker built the shells of the piñatas. Then, Carrillo would come in and decorate them. The piñatas come in all different shapes and sizes — like stars, animals and numbers. While building the piñatas was not his forte, Moreno did ultimately find his niche.

“He’d come home and help with the dressing of the piñata sticks, and he could do that very well,” Carrillo said. “And he kept doing it even though he was 100% dedicated to sports at that point.”

Moreno, now 28, worked full-time at Piñatas Moreno for four years, until he earned a spot on the UFC’s reality show, “The Ultimate Fighter,” in 2016. That was a huge achievement — and relief — for Moreno.

“I never had the right ability to make the piñatas,” Moreno said with a laugh. “But it was a fun part of my life. I’m a better fighter than a piñata maker.”

The Ultimate Fighter 24 was a tournament to decide who would be the next challenger for UFC flyweight champion Demetrious Johnson. To say Moreno was an unheralded prospect would be an understatement. He was seeded last among the 16 competitors.

Moreno lost his first fight via second-round submission to top-seed Alexandre Pantoja, but Moreno was impressive enough to earn a UFC contract. No other first-round loser received an offer.

“I was — and I am always — the underdog,” Moreno said. “I think I’m the underdog in life. But I’m always winning. I always win [in the end]. For me, that is the most important thing.”

After losing to Pantoja, Moreno won his first three official UFC fights. But then he went on a two-fight losing streak, and the uncertainty surrounding the future of the flyweight division caused the UFC to release him.

The timing couldn’t have been worse. Eight months after his release, in September 2018, Moreno’s second child, Megan, was born with health issues. The family doesn’t want to go into detail about her ailment, but at one point there was a fear she had a tumor on her stomach. She required surgery. And at that time, money was hard to come by. Moreno’s parents, with money from the piñata business, came to Megan’s aid.

“When we knew, it was a Friday, and the doctor told them they could operate as soon as possible but [my son] didn’t have the money,” Alfredo said. “I told him if he needed it, I’d give it to him so they could operate on Monday. And that’s how it went, and it all worked out. Thank God. We were worried, but it went well.

“She’s strong. She’s like Brandon, he’s a fighter. He’s got a lot of energy. He never takes a step back.”

Moreno, who lives with his wife, Shirley, and their three daughters, said Megan is healthy now and doing “amazing.”

And Moreno is excelling in his job.

In June 2019, Moreno fought in Legacy Fighting Alliance and won that promotion’s flyweight title. He was back in the UFC three months later — and has not lost since.

With his win at UFC 256, he made history representing a country that is no stranger to combat sports. Mexico has produced some of the greatest boxers, such as Julio Cesar Chavez and Salvador Sanchez, as well as current superstar Canelo Alvarez. There have been Mexican-American UFC champions, such as Cain Velasquez, but until Moreno, never one born in Mexico.

“It means everything to me,” Moreno said. “We have a lot of the future of combat sports in Tijuana, and Mexico in general. … But mixed martial arts is a relatively new sport in my country.

“I know I can change the game in my country if they have the first 100% Mexican champion in the UFC.”

From dreaming about law school to making pinatas in Tijuana to getting cut from the UFC to headlining a pay-per-view, Moreno’s journey has been a unique testament to his work ethic and perseverance.

“My life is a roller coaster,” Moreno said. “A lot of good moments, a lot of bad moments, too.

“At the end of the day, it’s all part of my experience.”