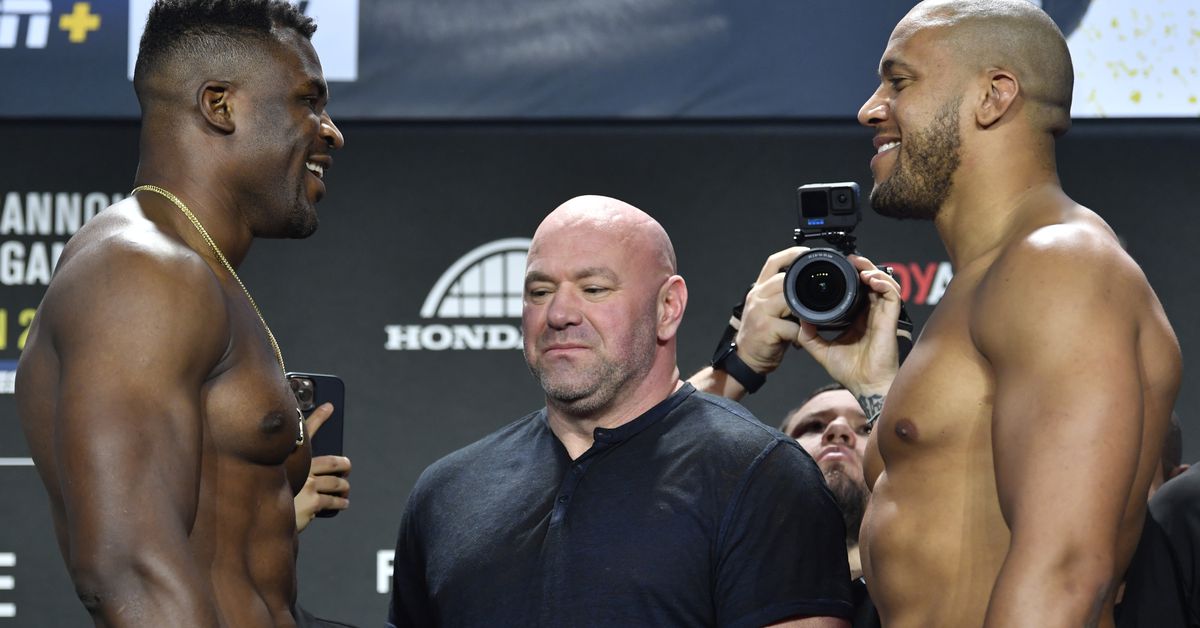 Ultimate Fighting Championship (UFC) is gearing up to stage its first pay-per-view (PPV) event of 2022, as UFC 270 goes down TONIGHT (Sat., Jan. 22, 2022) from inside Honda Center in Anaheim, Calif., featuring a Heavyweight title unification bout between Francis Ngannou and Ciryl Gane. In the co-main event, Brandon Moreno and Deiveson Figueiredo will square off in a Flyweight trilogy title fight.

Ngannou is nearing the end of his UFC contract and has one of the biggest challenges ahead of him in Gane. The two men know each other very well, and the much-talked-about strained relationship gives the bout a bit of heat … but not by much. Still, with “The Predator” looking to land a more lucrative deal for his next contract, a win is of the utmost importance here. A loss to Gane means his leverage goes downhill and a boxing career may lose some steam. A win, on the other hand, gives the hard-hitting big man all the leverage he can ever ask for and it would be crazy of UFC not to at least give him a nice bump in pay to keep his services. He’s marketable, has a monstrous physique, and entertaining once he lets his fists fly. While he may not be the most talkative, he can still deliver the goods inside the Octagon.

For Gane, defeating his old teammate sheds the interim champion label and gives him the boost he needs to start seeing his own bigger paychecks. Gane hasn’t been vocal when it comes to fighter pay, but he wouldn’t turn down an increase if it comes his way, which is what will happen if he can unify the titles. There isn’t a big secret to what these men plan to do once the cage door slams shut. But as we have seen in the past, just because two of the most powerful men are locked in the cage together, doesn’t guarantee fireworks. We can expect a feeling out process for a bit, especially since they know each other so well. But once the sweat starts flowing and both men get a bit of a rhythm, we can expect some violence which will culminate with a knockout win for one of these monsters because I really don’t see it going 25 minutes. Do you?

Call me crazy, but it seems as if the promotion — or Ngannou and Gane — didn’t put much effort into promoting this big man showdown. Sure, the competitors tried to play the former training partners-turned rivals angle, but it kind of fell flat and to be honest, just didn’t pique much people’s interest. Speaking for myself, I wasn’t sold on the animosity and this run-in was downright cringe. Granted, not everyone can sell a fight like Conor McGregor, but there wasn’t much effort. Dana White has said the event is already a sell-out at the gate, but it will be interesting to see how the PPV buy rate is. Furthermore, there wasn’t a ton of star-power attached to this card, but when fights started dropping like flies, the intrigue went down even more.

Jared Cannonier and Derek Brunson were set to collide on this card but were moved back a month to UFC 271. Pete Rodriguez stepped in to face off against Jack Della Maddalena after Warlley Alves bowed out of the fight, which will take place on the undercard. Charles Jourdain agreed to step in and fill the void left behind by Movsar Evloev, who bowed out of his fight against Ilia Topuria for undisclosed reasons. Also, Greg Hardy was lined up to face off against Aleksei Oleinik, but after “The Boa Constrictor” bowed out for undisclosed reasons, he was replaced by Sergey Spivak. Greg Hardy eventually suffered a finger injury and the fight was moved to UFC 272 on March 5.

Rodolfo Vieira was set to kick off the main card against Wellington Turman but the bout was canceled last-minute after Vieira was struck down with an illness. Moments later, the aforementioned fight between Topuria and Jourdain was also scratched after Topuria was deemed medically unfit to fight.

More on that debacle here.

How The ‘Prelims’ Look:

Silvana Gomez Juarez and Vanessa Demapolous will battle in a women’s Flyweight bout to see who can get back on the winning track. Demapolous came up short in her UFC debut against J.J. Aldrich, moving her to just 1-3 in her last four fights, Juarez also suffered a setback in her UFC debut, losing to Lupita Godinez, ending her three-fight win streak in the process.

Raoni Barcelos saw his nine-fight win streak go up in smoke after running into Timur Valiev in June 2021. Prior to the defeat, Barcelos had picked up huge wins over the likes of Said Nurmagomedov, Khalid Taha and Chris Gutierrez, just to name a few. His opponent, Victor Henry, will be making his UFC debut after putting in work on the regional and international scene for over a decade.

We will discuss several more undercard fights in the section that follows.

Kay Hansen saw her three-fight win streak go up in smoke after suffering a loss at the hands of Cory McKenna in Nov. 2021. The 22-year old hopes to turn it around when she battles UFC newcomer Jasmine Jasudavicius, who is on a two-fight win streak, earning her way in via the “Contender Series.” Jasudavicious has a record of 6-1 and has only been fighting professionally for two years.

Genaro Valdez will bring his undefeated record (10-0) to the Octagon after scoring a massive knockout win on the “Contender Series,” earning him an official invite to the big show. All 10 of his victories have come via stoppage, so to say he’s as exciting as they come would be an understatement. He has a tough first task in Matt Frevola who — despite a two-fight losing streak — is an experienced combatant with a well-rounded skill set.

Saimon Oliveira took home a gritty split decision win on the “Contender Series” over Jose Alday, giving him the opportunity to make his UFC debut. Winner of five straight, his previous four wins all came via submission. He will be facing off against Tony Gravely, who is coming off a tough defeat at the hands of Nathan Maness.

Jack Della Maddalena is another “Contender Series” alum making his UFC debut on this card, facing off against fellow newcomer, Pete Rodriguez, who got his chance after Warlley Alves bowed out of the event. Rodriguez made his pro debut on Oct. 2020, so he doesn’t have a ton of experience with just four fights under his belt. That said, all of his victories have come via first-round stoppage, one of them in just 10 seconds, another in 41. Winner of 10 in a row, Maddalena is also a finisher, winning nine of his 10 bouts via stoppage, all knockouts with one submission sandwiched in between.

And finally, Andre Fialho will make his UFC debut by putting his four-fight win streak up against the always-entertaining Michel Pereira. The bout was scheduled to be the co-main event of UFC Vegas 46 last Saturday, but the fight was shifted over to this event due to COVID-19 protocols. Fialho has the chance to make a splash if he can snap Pereira’s three-fight win streak, Since Pereira has built a nice fan base for himself over the last few years, Fialho can steal some of that shine with the upset victory.

To get a lot more information regarding all of the “New Blood” click here.

Who Needs A Win Badly:

While he isn’t exactly on a slump, I think Deiveson Figueiredo needs a win here in the worst way against Moreno. The two men fought to a majority draw at UFC 256, allowing “Daico” to hold on to the 125-pound title a bit longer. That said, many (myself included) felt Moreno had done enough to get the win. In the rematch six months later, “Assassin Baby” submitted the Brazilian bomber to take his belt and become the first Mexican-born champion in UFC history.

After the fight, Figueiredo was still chirping and leading up to the trilogy that trash talk only intensified by dragging Henry Cejudo into the mix. Figueiredo claims Moreno betrayed the former champ-champ and will have him in his corner for added spice. Also, shortly after getting submitted by Moreno, Figueiredo blamed his brutal weight cut for the defeat instead of giving the champ his props. When you add all of that in, it leaves Figueiredo in a must-win situation. He’s talked and talked, now he has to make that walk and pull out a win because another loss in a title fight will not only drop him down a few pegs in the 125-pound weight class but could delay his shot at another title bout as long as Moreno is champion. Furthermore, if he starts talking about weight issues, it could prompt him to move up to the Bantamweight division.

Sure it’s the first PPV event of the year for UFC, but it’s not exactly screaming “BUY ME!” especially with the recent price bump. It’s always nice to have two title fights, but we’ve seen one of them twice before and, as mentioned earlier, the Heavyweight bout didn’t seem to get much push. While it could turn out to be a great brawl between two behemoths, the chances are it will likely be either a one-hitter quitter or tentative chess match.

As for the rest of the card, we discussed a matchup between UFC newcomer Andre Fialho and Michel Pereira earlier, so let’s take a look at the rest of the lineup, which, let’s be honest, is lacking some pop.

One of the bouts that is flying under the radar is one between Said Nurmagomedov and Cody Stamann. Nurmagomedov bounced back from his loss to Raoni Barcelos by knocking out Mark Striegl in just 51 seconds. Stamann, meanwhile, is looking to get back into the win column after suffering back-to-back defeats to Jimmie Rivera and Merab Dvalishvili. Stamann has already gone on record to say he plans to be the first man to finish the Dagestani-born fighter by outwrestling him, first.

It’s a tall task to say the least since Said is a product of the Khabib Nurmagomedov-school of grappling. That said, if Stamann can live up to his words it would be a huge way to get back on track.

Due to all of the cancellations, Michael Morales will bring his undefeated record of 12-0 to the UFC cage to take on Trevin Giles in a Middleweight affair on the main card. Giles is coming off a tough loss to Dricus du Plessis at UFC 264, snapping his three-fight win streak. Morales, meanwhile, will be one of the youngest UFC fighters on the roster at 21 years of age.

And of course, Moreno will look to put Figueiredo in his rear-view mirror once and for all, while “Diaco” hopes to possibly set up a fourth straight fight — the first time ever that will happen — if he can get his revenge. But the main event is what everyone is waiting for. Ngannou has the opportunity to get everything — or part of — he’s been asking for if he can go out and take care of business, while Gane wants to solidify himself as the one true king of the big men by taking out his old friend.

*Fight card, bout order and number of fights remain subject to change due to COVID-19.*

Remember that MMAmania.com will deliver LIVE round-by-round, blow-by-blow coverage of the entire UFC 270 fight card right here, starting with the early ESPN+ “Prelims” matches online, which are scheduled to begin at 7 p.m. ET, then the remaining undercard balance on ESPN/ESPN+ at 8 p.m. ET, before the PPV main card start time at 10 p.m. ET on ESPN+ PPV.

To check out the latest and greatest UFC 270: “Ngannou vs. Gane” news and notes be sure to hit up our comprehensive event archive right here.