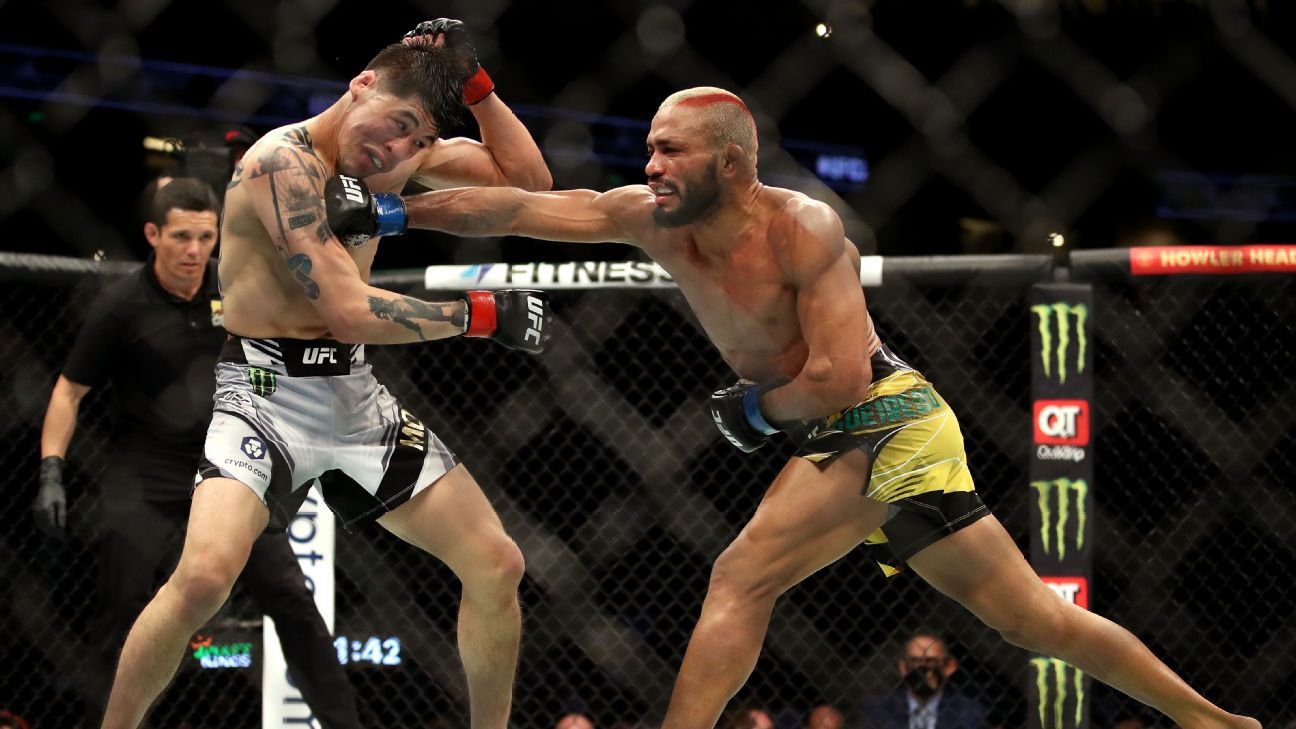 Deiveson Figueiredo exacted revenge on Brandon Moreno in their trilogy fight to win back the flyweight title at UFC 270 at the Honda Center in Anaheim, California on Saturday. It was the most entertaining fight of the night, and Figueiredo seemed to have elevated his game after moving his camp to Arizona to work with Henry Cejudo. Should they do it a fourth time, with the score now tied at 1-1-1 after three bouts?

Beyond Saturday’s title fights, Said Nurmagomedov moved to 4-1 in the UFC with a clinical submission victory in less than a minute. Is he a threat in the bantamweight division?

Jack Della Maddalena, after starting his career 0-2, has won 11 consecutive fights, including a victory in his UFC debut against Pete Rodriguez on Saturday, in Round 1. Can he be the next Australian star in MMA?

And what about Michael Morales? Against Trevin Giles he showed versatility, poise and extreme confidence, making him another prospect to watch.

Figueiredo and Moreno need to face off for a fourth time

Contreras Legaspi: There’s never been a rivalry with four title fights between the same two opponents in the history of the UFC, but Deiveson Figueiredo and Brandon Moreno are willing to go against each other once again, after completing their trilogy on Saturday.

Figueiredo proved that a couple of months training with a double champion can make a difference. Last October, Figueiredo moved his training camp from Brazil to Arizona to train under Eric Albarracin and former two division UFC champion Henry Cejudo. He improved on his takedown defense, was effective with his calf kicks and learned how to keep Moreno away from his back.

Figueiredo’s conditioning was also much better than their previous meeting — a submission win for Moreno in Round 3 — and that helped to make the third fight closer to their first fight. In December 2020, Moreno and Figueiredo delivered an instant classic with 25 minutes of high-paced exchange that ended up in a majority draw.

Both fighters tried to secure every round by pressing through the final seconds. Figueiredo did enough to convince the judges on Saturday, thanks in large part to dropping Moreno multiple times with his powerful right hand.

Figueiredo is back as champion and he’s regained his confidence with the help of Cejudo, a former training partner of Moreno. Most Mexican fans — a majority at the Honda Center — were clearly disappointed with the outcome, but no one can complain about either fighter’s performance. This third fight will be in consideration as one of the best of 2022.

Immediate rematches are not the standard in the UFC, especially after three straight battles. But after even after three fights in 13 months, with an even score, the fourth one seems necessary.

Beware of another Nurmagomedov in the UFC

Wagenheim: The name was an attention getter, and so was the performance.

Said Nurmagomedov is not related to Khabib, who retired in 2020 as an undefeated UFC lightweight champion. But the 29-year-old bantamweight is a fellow Dagestani and is also a supreme grappler, as he showed in finishing Cody Stamann by guillotine choke in just 47 seconds for his fourth win in five UFC bouts.

This Nurmagomedov is different from his namesake, though. Said is a more refined striker, and he began Saturday’s fight by attacking Stamann with a slick array of punches and kicks. Immediately put on his heels, Stamann tried to change how and where the fight was being fought. He closed the distance and went for a takedown. No problem for Nurmagomedov. He didn’t simply switch to defense. He latched onto a choke, quickly tightened his lock. And Stamann was tapping practically as soon as the fighters hit the canvas.

Now it’s the bantamweight division’s turn to deal with a dominant Nurmagomedov.

Okamoto: On a night that saw many UFC debuts, Michael Morales was the one who stood out to me. By far. Victor Henry was also incredibly impressive and I thoroughly appreciated his style, but he’s 34 and said it himself after his victory — he has no time to waste if he’s going to make a difference.

Morales, on the other hand, has nothing but time. The Ecuadorian welterweight prospect is just 22 years old. He’s not a one trick pony with the base of a well-rounded game to build upon. And the finishing ability he showed against a veteran like Trevin Giles was impressive.

Morales felt Giles’ pressure, started it down and showed versatility with a beautiful counter uppercut. I liked the poise and confidence he showed in that kind of spot as well — again, in front of an opponent in Giles who has eight fights of UFC experience. Given his combination of youth and marketability (he represents Ecuador and Mexico, where he trains), I expect the UFC to bring him up slow and put him in positions to succeed. Keep an eye on him.

Della Maddalena could be one of Australia’s next MMA stars

Raimondi: Everyone knows the drill at this point. If you’re competing on Dana White’s Contender Series, you better come out and try to finish your opponent in highlight-reel fashion. If not, White is liable to say something along the lines of “better luck next time.”

Jack Della Maddalena broke the mold back in September. He beat Ange Loosa by unanimous decision, but he looked so impressive — so much like a future star — that White signed him even without earning a KO finish. Well, Della Maddalena has a finish under his belt now. He stopped Pete Rodriguez at 2:59 of the first round Saturday night.

The Aussie put on a boxing clinic against Rodriguez, who came in with four knockouts in four career fights. Della Maddalena is a southpaw with a beautiful, prolific jab and smooth combinations. It was a step-back straight left — think Conor McGregor vs. Jose Aldo — that put Rodriguez down for good.

Speaking of McGregor, Della Maddalena has a connection with “The Notorious.” Like McGregor, he is a client of Paradigm Sports Management. And the team there is incredibly high on Della Maddalena’s future as a potential star. MMA in Oceania has been red-hot lately with champions like Alexander Volkanovski and Israel Adesanya, who is also repped by Paradigm. Della Maddalena could very well be one of the next standouts coming out of that part of the world, where the sport is only beginning to surge more and more.