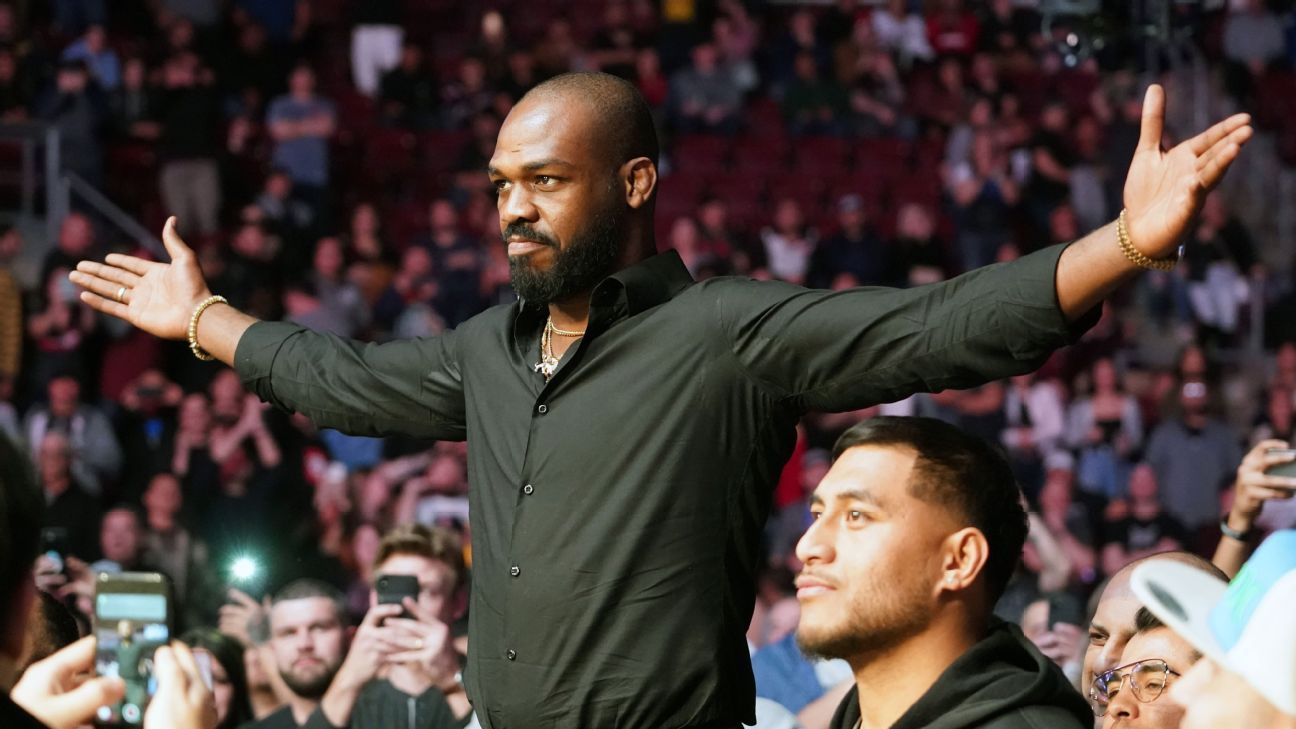 ANAHEIM, Calif. — Jon Jones was going to be in attendance at UFC 270 on Saturday night. He’d be there, likely close to the Octagon, to watch the heavyweight title unification fight between Francis Ngannou and Ciryl Gane, and the winner would likely be his next opponent.

That was the plan a week prior to the event, those close to him told ESPN. But in the unpredictable world of arguably the greatest MMA fighter to ever live, things do not always go as planned.

“Right now, I’m on a perfect training routine, don’t wanna disturb it for anything,” Jones told ESPN’s Brett Okamoto in a text message a few days out from UFC 270. “No need to flatter these big boys, excited to get the job done when it’s time.”

Instead, Jones took to Twitter on Saturday to address the fight — which he publicly deemed lackluster — and Ngannou, the man who left Honda Center as the UFC undisputed champion after a unanimous decision victory.

“At the end of the day, I’m f—ing them both up,” Jones tweeted and later deleted.

Jones, the former longtime UFC light heavyweight champion, also teased retirement and took a shot at Gane, writing he loves how “everyone gets so impressed with the new guy.”

“If this is the Apex of heavyweight fighting, I’m excited about it,” Jones tweeted. “Got some more records to break.”

Former Golden Boy boxing CEO Richard Schaefer, who is advising Jones in his negotiations with the UFC, is also very confident in Jones’ chances of beating either Ngannou or Gane.

“The way [Jones] went about preparing to move up to heavyweight is unheard of in UFC history,” Schaefer told ESPN. “He is not chasing a bigger payday and moving up. No. He prepared mentally and physically to be heavyweight champion. It will be the biggest night in UFC history.”

As always seems to be the case with Jones, this won’t be a straight path to a satisfying ending. Ngannou said he tore his right MCL and damaged his ACL three weeks before fighting Gane. He believes he needs surgery. On top of that, Ngannou is in the middle of a very messy, and very public, contract impasse with the UFC.

Jon Jones expects to return to the UFC in the second quarter of 2022 and would like to face the winner of Francis Ngannou vs. Ciryl Gane.

Dana White, the UFC president, didn’t put the belt on Ngannou after the fight, and did not attend the postfight press conference, both of which have become customary for White on major fight nights. Ngannou would have been a free agent had he lost. But by retaining the title, the UFC’s champions clause kicks in, meaning Ngannou will still be under contract for the span of three fights or one year, whichever comes earliest.

Ngannou has vowed to never fight again on his current contract and has been open about his desire to venture into boxing. It’s very possible this could be the last time we see Ngannou in the Octagon as he heads into surgery and potential free agency in early 2023.

Ngannou said after his victory over Gane he was “pumped” when he won the title from Stipe Miocic in 2021, because Jones was pegged as the next challenger. But things have gone a bit haywire on multiple fronts.

“Since I won that fight, I never heard about it,” Ngannou said. “So, at this point I don’t really know what is off the table.”

If Ngannou will be out of UFC action for an extended period of time, or perhaps for good, Jones could pursue an interim title fight with Gane, or former champ Miocic. Miocic has expressed some interest in a Jones fight. Derrick Lewis could also put himself back in the mix with a win over Tai Tuivasa on Feb. 12 at UFC 271.

Jones and his team fully expect to get the next title shot after Ngannou vs. Gane.

“We just have to see how it plays out in the next few weeks,” Schaefer said.

Jones, 34, has not fought since February 2020, a close unanimous decision win over Dominick Reyes at UFC 247 to retain the UFC light heavyweight title. In August 2020, Jones vacated the light heavyweight belt with an eye toward moving up to heavyweight and going after that championship.

Jones was supposed to be next up for the winner of the title fight between Ngannou and Miocic at UFC 260 last March. In preparation for the move, Jones bulked up significantly. In September, he said he was 255 pounds and targeting 270 for his heavyweight debut (he would then have to cut to 265 to make the heavyweight title limit). Those numbers are a far cry from 205 pounds, where Jones has spent the duration of his career.

But Jones butted heads both publicly and privately with the UFC during contract talks after Ngannou became champ. Jones tweeted that an offer in the $8 million to $10 million range would be “way too low for a fight of this magnitude.”

Last May, Jones hired Schaefer as his adviser. Schaefer, who now leads the boxing organization Probellum, has had a friendly relationship with White for years and came into the fold confident he could get a deal done.

The UFC, however, went in a different direction that didn’t even include Ngannou, after he informed them he would not be ready in time for that date on a short turnaround due to a previously scheduled trip back to his home in Cameroon.

The promotion booked Gane against Lewis for the interim title at UFC 265 last August, a fight that Gane won to set up a title unification bout with Ngannou, his former teammate at MMA Factory in Paris. The rich backstory between the two men, including Ngannou’s ongoing feud with Gane’s coach (and Ngannou’s former mentor) Fernand Lopez, made it easy for the UFC to keep Jones in limbo for another title fight.

Meanwhile, just hours after he was inducted into the UFC Hall of Fame for his epic 2013 fight with Alexander Gustafsson, Jones was arrested Sept. 24 in Las Vegas for felony tampering with a vehicle and misdemeanor domestic battery. Jones took a nolo contendere plea last month and got off without jail time. It was the latest in a string of outside-the-cage issues for the legendary fighter that include a felony hit-and-run charge, several DUI arrests and two failed drug tests.

The September arrest got Jones suspended from his JacksonWink MMA gym in Albuquerque, New Mexico, where he has spent his entire, 14-year UFC career. Although JacksonWink coaches Greg Jackson and Brandon Gibson still intend to coach him, Jones has also started to visit Fight Ready in Scottsdale, Arizona, where he is working with former UFC double champion Henry Cejudo and coaches Eric Albarracin and Eddie Cha. Jones’ next training camp could be split between Albuquerque and Scottsdale.

“He has this God-given ability that’s second to none,” Cejudo told ESPN. “But the crazy thing about Jon Jones and him coming out here and seeing what we have to offer him, there’s so much room for him to grow still. It’s a trip. I almost feel like he’s become a world champ just based on ability. Just based on his attributes and things like that — he’s a winner.”

Jones (26-1, 1 NC) is arguably the greatest UFC champion ever, in any division. He held the UFC light heavyweight title on and off for about a decade, only losing it due to outside-the-cage issues. Jones’ only loss came in 2009 via disqualification in a fight against Matt Hamill that he was absolutely dominating.

The New York native’s résumé is unmatched. He’s unbeaten in a UFC record 18 straight fights, is tied for the most title defenses in UFC history with Demetrious Johnson with 11 and has the most wins ever in UFC title fights with 14. Jones owns wins over former or current UFC champions Mauricio “Shogun” Rua, Quinton “Rampage” Jackson, Lyoto Machida, Rashad Evans, Vitor Belfort, Glover Teixeira and Daniel Cormier.

With all of those accolades and his popularity, Jones seems like a no-brainer for the next UFC heavyweight title shot, if the two sides can come to an agreement. If a deal with Ngannou can be brokered, Ngannou vs. Jones would be one of the biggest pay-per-view main events of the year and, with the right promotional efforts, one of the top ones ever.

But again, when it comes to Jones, things don’t always go exactly as planned. There are still more questions about the future of the heavyweight division, even after Ngannou’s win over Gane, and they come straight from the top brass at UFC.

“I don’t feel confident in saying Jon Jones is next and not because I think he’s unreliable,” White told Okamoto last week. “It’s because I honestly don’t know what Jon Jones wants to do next. I think Jon is gonna watch this fight and he’ll decide maybe he doesn’t fight at heavyweight. Maybe he goes back and tries to regain the light heavyweight championship. I honestly don’t know the answer to that question.”