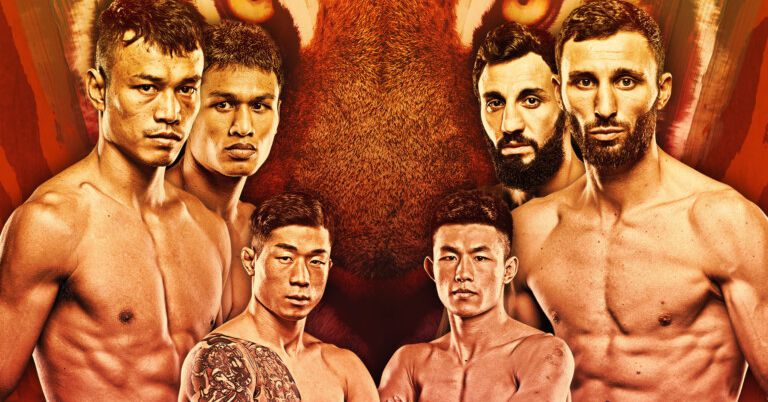 ONE: “Only the Brave” has lost two main events to COVID-19 at the time of writing and will now be headlined by a featherweight kickboxing Grand Prix semifinal. Sittichai Sitsongpeenong faces Davit Kiria in the final fight of the night.

Sittichai Sitsongpeenong is known for his lightning fast left kicks and is one of the most decorated kickboxers in the division. He holds two wins over Kiria from his GLORY kickboxing days and will be a big favorite here.

Davit Kiria marched forwards, planted his feet firmly on the ground and threw bombs in his quarterfinal win over Enriko Kehl. In his first fight with Sittichai he was stopped by a counter knee to the body while he was punching so it will be interesting to see whether he shows a similar level of aggression here.

Jo Nattawut got bumped into the tournament after Marat Grigorian tested positive for COVID-19. He has an unusual background having made his name in the US, not Thailand, but stopped his last opponent with the type of overhand right more commonly seen in MMA than Muay Thai.

Chingiz Allazov was the standout performer in the quarterfinals. He rocked Samy Sana with a head kick and then finished him off with a barrage of punches and will be the favorite to win this fight.

Kim Jae Woong (12-4) is coming off the biggest win of his career. He knocked out Martin Nguyen in the opening round at ONE: “Revolution” back in September.

Tang Kai (13-2) has won five fights out of five for ONE Championship and is on an eight-fight winning streak. But this will be the first time that the Chinese fighter has been matched with a ranked opponent.

Lipeng Zhang (31-11-2) wrestled his way to victory over Eduard Folayang on his ONE Championship debut. In the past he has been more of a striker who looks to stay in the pocket and trade so that might be the strategy here.

It is not clear exactly what the background of Ruslan Emilbek Uulu (13-2) is. He has spent the majority of his career competing in China and has trained with Lipeng but appears to be an out-and-out wrestler.

Rade Opacic is tall, even by heavyweight standards and will attack the body and head. A left hook to the liver is his favorite weapon but he can also do damage with straight punches, kicks and knees.

Francesko Xhaja doesn’t appear to have been fighting at a particularly high level. He keeps a high guard and likes to mix up straight punches and low kicks.

Jarred Brooks (17-2-0-1) demonstrated in his ONE Championship debut that he probably has the best wrestling in the entire division. He can take you down and keep you down and won’t waste any time in trying to do that to Minowa.

Hiroba Minowa (13-2) is also primarily a wrestler although the sport is nowhere near as established in Japan as it is in the US. He is as tough as they come but stylistically this looks like a bad matchup for the Japanese fighter.

Ivan Kondratev knocked down Marat Grigorian in the opening round. He is a southpaw with tricky movement and good timing, he will constantly circle away and look to counter.

Dovydas Rimkus will hold his hands low and try to bait opponents before lunging in with hard punches to the head or body. He has more of a boxing style of movement than a kickboxing style and it means he can’t throw many kicks.

Tatsumitsu Wada (23-11-2) is one of the tallest fighters in the division but almost always goes the distance. He caused Demetrious Johnson a few problems with his reach but is not afraid to shoot for takedowns.

Shuo Wang (13-5) appears to have a Sanda style and is very light on his feet and likes to attack with low kicks. He put in a superb performance against a much taller opponent on his ONE Championship debut and will look to do the same here, staying on the outside and trying to time Wada and counter.

Hiroyuki Tetsuka (10-4) is emerging as a serious contender in the welterweight division. He likes to plant his feet and throw full power kicks and punches but can also take opponents down and attack with ground and pound.

Purev Otgonjargal (7-1) is riding a seven-fight winning streak that includes two very impressive wins for ONE Championship and ONE Super Series. He was in devastating form in his last fight and needed less than 40 seconds to finish his opponent with a left hook and some ground and pound.

Micael de Jesus (9-5) has been in with some solid opponents on the regional scene in Brazil. He doesn’t look like a top prospect but is well rounded and mixed up striking with takedowns.

The entire ONE: “Only the Brave” fight card will be available to view free in some territories using the newly launched app which you can download here.