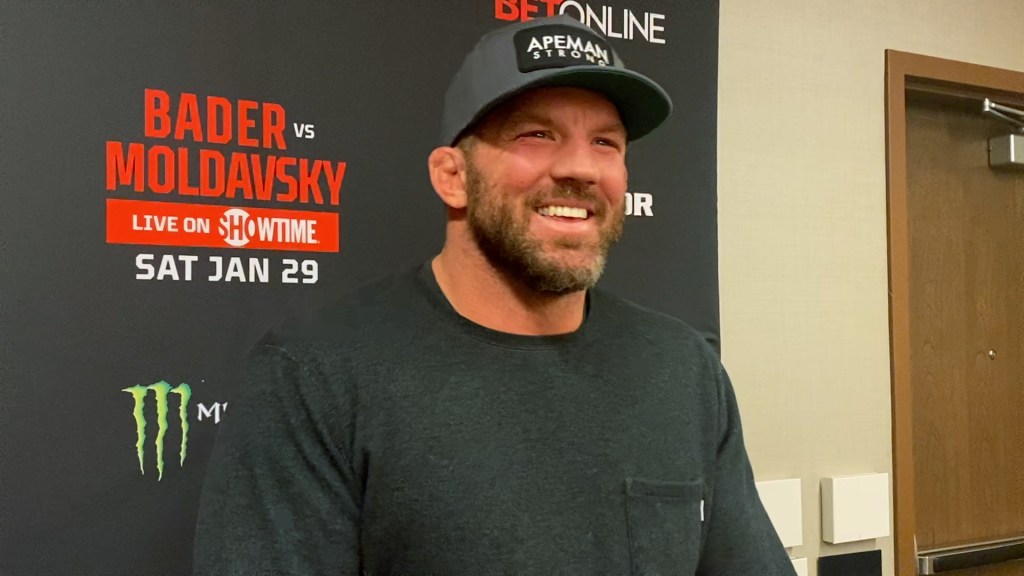 By Farah Hannoun and Nolan King |

PHOENIX – For Ryan Bader, there isn’t too much to gain from a Fedor Emelianenko rematch.

Bellator president Scott Coker revealed Emelianenko (40-6 MMA, 4-2 BMMA) hopes heavyweight champion Bader (28-7 MMA, 6-2 BMMA) will be his retirement fight if Bader gets past his teammate and interim titleholder Valentin Moldavsky (11-1 MMA, 6-0 BMMA) in their unification bout at Bellator 273 on Saturday.

“I get it,” Bader told reporters, including MMA Junkie, during Wednesday’s Bellator 273 media day. “I ended up knocking him out in 35 seconds, and I can see how he wouldn’t want to go out like that and want a rematch. I’m open to it, but I haven’t really thought about it too much.”

While Bader understands Emelianenko’s desire to walk away on top while avenging a loss, he just doesn’t see any perks of running things back for himself. Bader needed less than a minute to knock out Emelianenko to become dual-champ in the heavyweight grand prix final at Bellator 214 and knows he likely won’t top that performance.

“I want to focus on this fight – go out there, win this fight, and then see what the win side of that would look like for me, because right now looking at that is like a lose-lose situation,” Bader said. “I can’t beat him any better than I did. It is a big fight. Any Fedor fight is a big fight – especially his last retirement fight. But we’ll cross that bridge when it comes.”

Video: Israel Adesanya opens as favorite to beat Alex Pereira at UFC 287. Right call?
Jorge Masvidal Shoots Down Gilbert Burns 5-round BMF Request | The MMA Hour
‘When he hits you, it’s different’: What it’s like facing the KO power of Derrick Lewis
Demetrious Johnson Names What Separates Him From Other GOAT Contenders
Boxer Liam Wilson Accuses Opponent Of Weigh-In Tampering