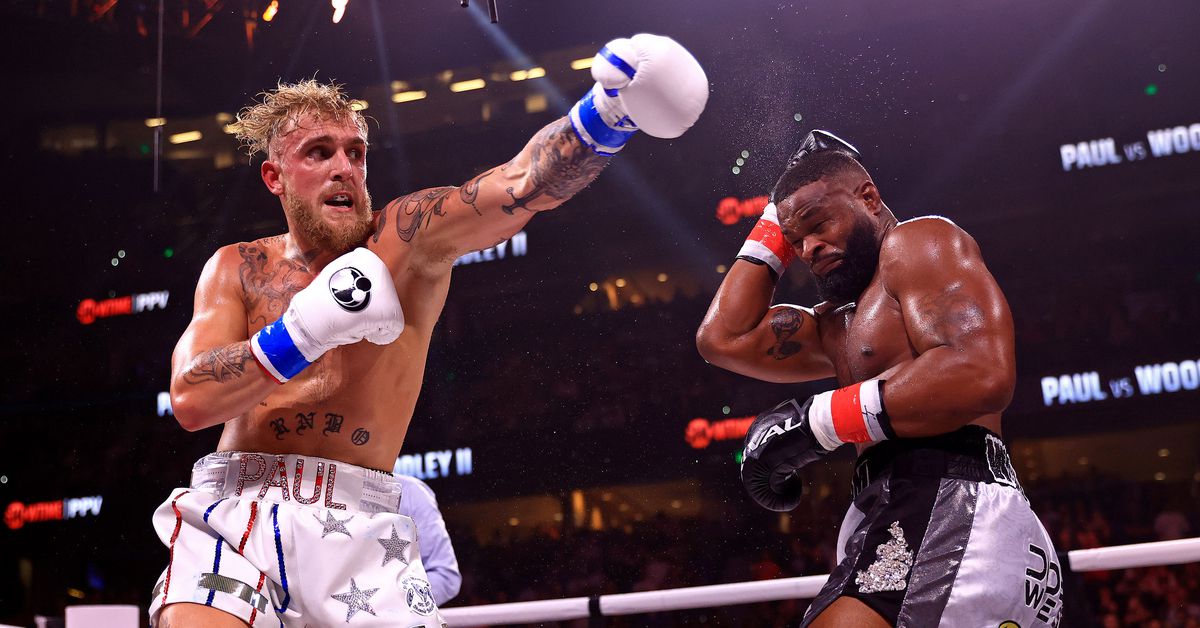 Tyron Woodley knows he made a huge mistake in his second fight with Jake Paul.

Their rematch in December ended disastrously for Woodley as he was knocked out with one massive punch in the sixth round, sending the former UFC welterweight champion to his sixth straight loss across boxing and MMA and creating a highlight that immediately went viral.

Woodley admitted on The MMA Hour that he has thought about the error that led to his downfall constantly, but otherwise he thinks plenty of credit has to go to Paul’s execution.

“When I watch a fight, especially a clip like that, I kind of separate myself from the clip,” Woodley said. “So I didn’t really see myself getting knocked out by a YouTube kid. I saw a f*cking phenomenal punch landing at the perfect time. So when I was looking, I was trying to look at body language, I was trying to look at me feinting, what made me drop my left hand?

“But I won’t allow people to take away the fact that, one, I stepped up when nobody really was available. I was in shape, I was prepared, I was ready. I won every round — I think he might have won the second round when I look back at the fight — I won every round, even was winning that [sixth round] up until that one moment. So I won’t let my hand dropping for one second and him perfectly timing the punch at the same time make me completely take away everything that happened.”

Following the fight, Woodley had some fun at his own expense, paying out a $5,000 prize for the best meme based on his now infamous KO loss. Woodley is aware that not everyone was a fan of the idea, but he considers it his way of controlling the narrative.

Part of that narrative is dispelling the notion that he was defeated by an unskilled wannabe boxer in Paul. Woodley believes that Paul has made the most of his immense fame and resources to fuel his boxing career, two factors that could allow him to surprise a lot of potential opponents.

“A lot of people are saying, ‘Aw, you lost,’ and, ‘You got knocked out’ — he would literally f*ck a lot of y’all up,” Woodley said. “Like, MMA fighters and other people that just bumping at the gums. He’s an athletic kid that don’t have no job beyond this. He don’t have no kids, he don’t have no business he’s running. He can have the best training, the best coaches, the best nutrition, the most focus. He can separate himself. He don’t have to the financial burden. Most MMA fighters, when we first start, we don’t have money. We do what we can do. We get whatever training that can help us out to see a future in us, but he came into boxing knowing how to push the machine of numbers.

“That’s all we’re doing is entertainment. This is numbers. This is pay-per-view, this is getting eyeballs on us. So I had to just really take a moment to recognize what God has for me is for me, what God has for that young man is for him. I can’t let one dropped hand — one of the worst mistakes I’ve ever made in a fight — but at the same token, had I not dropped that hand, had I continued to fight the way I was going, we’d have been looking at something different. So I’ve got to just take the bitter with the sweet and just keep moving.”

Woodley was only meant to fight Paul once last year, but he was called into action for a rematch with Paul when scheduled opponent Tommy Fury was forced to bow out due to injury and illness. “The Chosen One” spoke glowingly of the entire experience, which came on the heels of his departure from the UFC in March.

He is looking forward to fighting multiple times in 2022, possibly in both boxing and MMA. In other words, fans shouldn’t expect him to slow down anytime soon even with his 40th birthday approaching.

“I just want to have a fun year,” Woodley said. “To be honest, fighting Jake was fun to me, training for Jake was fun to me, the press conference sh*t was fun to me. It was the best experience I’ve ever had in any fight. I swear to you. The mood, the Showtime sh*t, the promotion sh*t, the back-and-forth stuff, feeling like I was getting paid what I was worth, was f*cking amazing. Endorsement-wise, I went crazy, and I just put myself and my family in a different position — and though I didn’t come out on top, I still learned so much and I’ve still got so much to learn.

“My world has never been squeaky clean, it’s never been the easy route, but I never quit. My kids ain’t never seen that out of me, never seen me say, ‘OK, I gotta give up because stuff ain’t going my way.’ Things have went my way so much in my career, in life, in wrestling, school, and in college, MMA, you can’t just f*cking walk away from what you feel God set out for you because you have a couple of lessons.”

While he credits Paul for the win, Woodley can’t help but wonder how differently the two fights could have gone and how close he was to getting his hand raised. As it stands, he’s determined to move forward no matter how much criticism comes his way.

“If you really think about it, I feel like I won the first fight and I was winning everything of that fight,” Woodley said. “So had one [more] judge said I won that first fight, had I kept my hand up for this fight, we’re talking about a whole different thing. Nobody gives a f*ck about that. They don’t care. They just care about what’s viral at that moment. And it was viral, one, because it was him; two, because his fans, the people that hate him or love him, they’re gonna keep talking, they’re not gonna never be silent. So that’s what it was.

“One thing it ain’t, it ain’t the end and it’s not gonna define me, and it’s definitely not gonna stop me.”