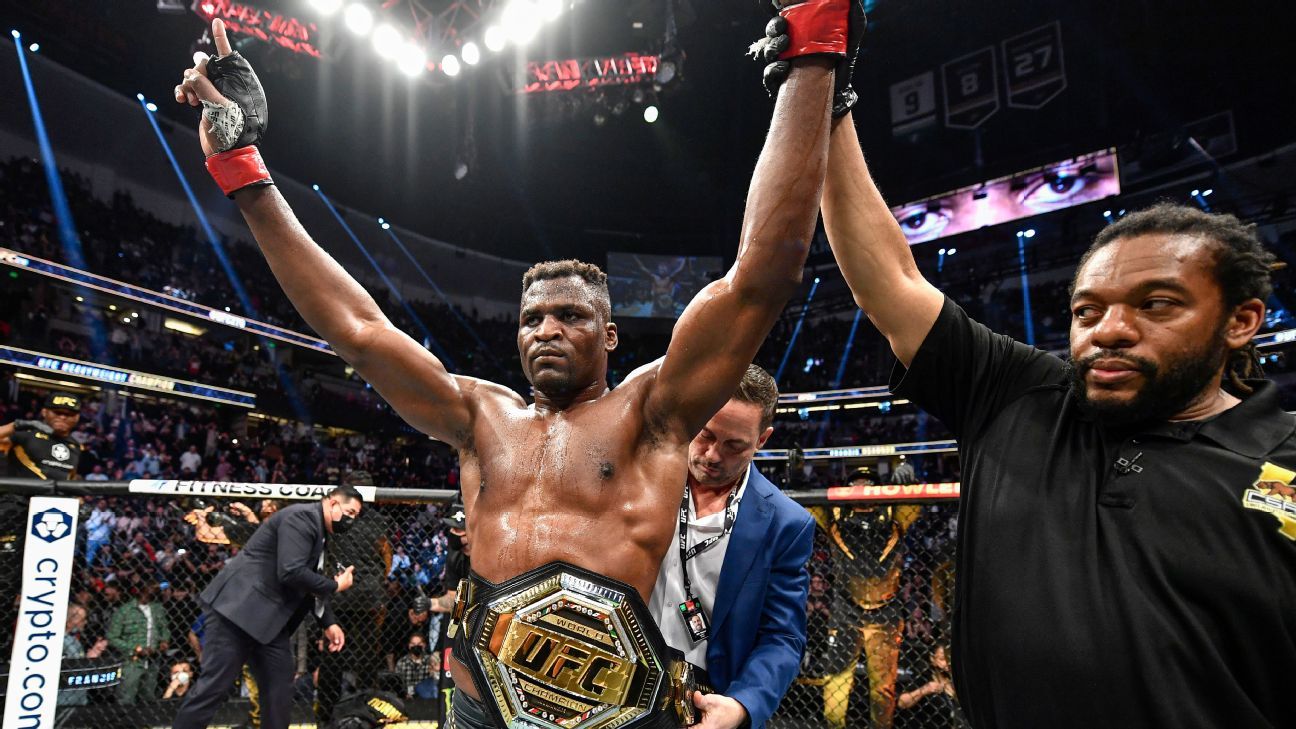 UFC president Dana White says him not putting the heavyweight title belt on Francis Ngannou after UFC 270 last weekend had nothing to do with “disrespect.”

White addressed the postfight situation in a fan Q&A on Wednesday night with interviewer Laura Sanko on ESPN+.

White did not put the belt on Ngannou in the cage following Ngannou’s successful title defense over Ciryl Gane last Saturday, as is customary. Instead, UFC matchmaker Mick Maynard did the honors. White also did not attend the postfight news conference like he normally would.

Many speculated that White did not do those things because Ngannou and the UFC are embroiled in messy contract negotiations. On Wednesday, White said that was not the case, explaining that he had something to deal with backstage and was not able to make it back to the Octagon in time. White did not go into detail about what he had to do that prevented him from returning for the main event.

“For anybody that thinks I was showing any kind of disrespect towards Francis — I saw Francis all week, you idiots,” White told Sanko. “I shook his hand, I said hi to him. I was out there for the staredowns, the whole thing.”

White did attend the prefight news conference and the ceremonial weigh-ins as usual, facing the fighters off on stage for both events.

White said in the interview that he has missed pay-per-view main events before, referencing UFC 199 in June 2016. On that night, White was backstage having reporter Ariel Helwani and other then-members of the MMAFighting.com staff removed from the Forum in Los Angeles and pulling their UFC media credentials because of a scoop Helwani broke earlier in the evening.

Ngannou and the UFC have been at odds over his contract for almost a year. If Ngannou lost to Gane, he would have been a free agent. But because of the UFC’s champions’ clause, he remains under UFC contract for the span of one year or three fights, whichever happens earliest. Ngannou has said he wants to have the ability to box written into his UFC contract, which has not been done before.

Ngannou has said he’s willing to hold out and not fight for the entire year in order to become a free agent. In an interview on “The MMA Hour” on Monday, Ngannou said the UFC threatened to sue his agent, Marquel Martin of CAA, in an email sent Saturday night, just hours before the Gane fight. The UFC allegation was that Martin discussed Ngannou going into boxing with Jake Paul’s business partner, Nakisa Bidarian, while Ngannou was still under UFC contract.

Regarding Ngannou’s victory Saturday night, White praised the champion for his strategy, using his wrestling and grappling to overtake Gane after being down on the scorecards early. Ngannou is known for his punching power, not his ground game.

“I don’t think anybody expected Francis to come in and wrestle,” White said. “Brilliant game plan by Francis to do what he did the way that he did it.”

Ngannou needs surgery to repair a damaged MCL and ACL in his right leg and will likely be out for at least nine months, Martin told ESPN’s Brett Okamoto on Wednesday.

White said in the interview with Sanko that he’d like to have Ngannou defend against all-time great Jon Jones next. White called it a “big fight,” adding “if it’s possible to get it done.”

Max Holloway vs. Arnold Allen targeted for UFC Fight Night on April 15
MMA Junkie’s Knockout of the Month for January: Ismael Bonfim flattens Terrance McKinney
How Blagoy Ivanov cheated death to become a UFC contender
Joseph Holmes says he was ‘jumped’ by Kevin Holland & crew
‘I Regret Not Being This Monster I Am Again’