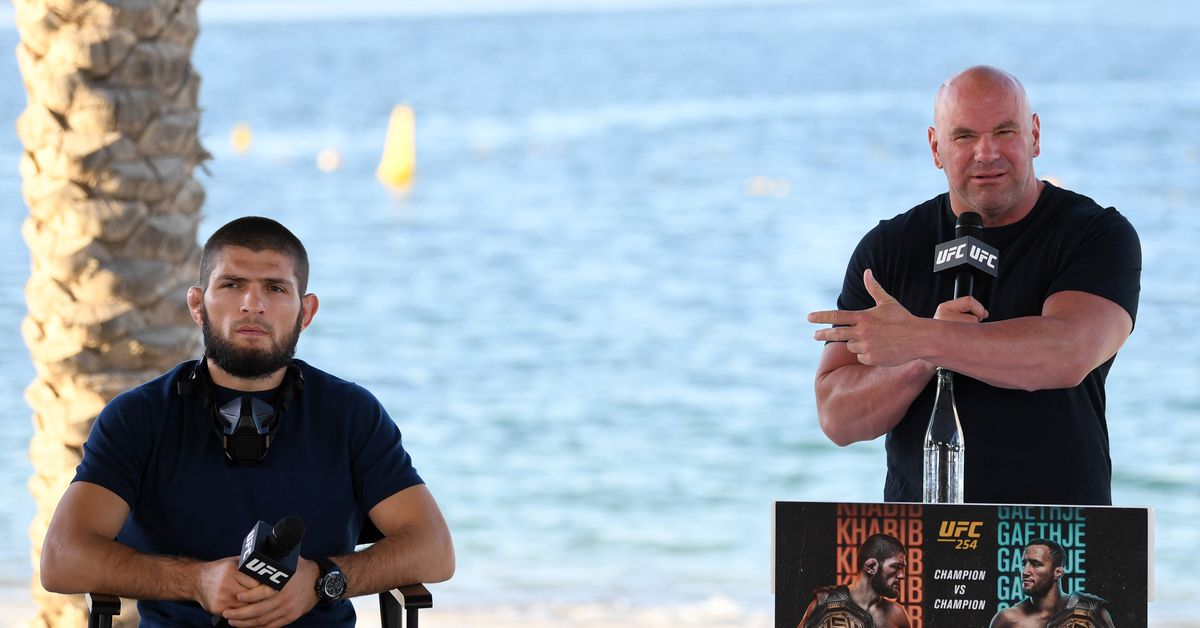 The first Eagle FC card on American soil is less than 24 hours away, and promoter Khabib Nurmagomedov isn’t afraid to ruffle any feathers.

The former UFC Lightweight kingpin has better insight than most regarding the trials and tribulations of being a professional fighter and working under the UFC banner. Plus, even without that insider info, the treatment and pay of fighters is a hot button topic right now. Jake Paul wouldn’t be proposing a fighter/boxer union otherwise, nor would the Heavyweight champion of the world be so public in his contract negotiations.

Of course, if there’s no game in town outside of the Octagon, taking a stand is more difficult. Nurmagomedov is in prime position to capitalize on ruffled feathers, and he issued a warning to the established promotions during tonight’s press conference.

“Big organizations like UFC, Bellator, they have to be careful with their fighters because Eagle FC is here,” Nurmagomedov said (via MMAJunkie). “Of course, we’re trying to sign good athletes, great athletes with good names. At the same time, we’re working with the young generation too. We have two goals. I just want to say be careful. If they don’t treat good fighters, Eagle FC is here.”

Again, Eagle FC’s move to holding shows in the US is very new, so it has only recently become a more accessible option for known names like Kevin Lee and Rashad Evans. Still, Nurmagomedov has already managed to enact some change, pointing to the additional 165 lbs. weight class many UFC fighters have called for over the years as a benefit for the athletes.

“I understand this game (from the) inside,” Nurmagomedov said. “I was a professional fighter last twelve years. I hear from a lot of fighters that they really want weight classes at 155, 65, 75, and 85. When I opened this Eagle FC, like, why can’t I do this? Let’s build some new history.”

Eagle FC 44 goes down tomorrow night (Friday, Jan. 28, 2022) inside FLXcast Arena in Miami Florida and features a Heavyweight main event clash between Tyrone Spong and Sergei Kharitonov. Check out the full card HERE or tune in with us at MMAmania.com tomorrow for the live play-by-play thread.

Zabit has plans to “destroy someone” on February 28 ..?

Tanner Boser is my favorite mid-division Heavyweight prospect. Cardio and karate in a big man? Fun!

Charles Oliveira is about to dethrone Gregor Gillespie as MMA’s king fisherman.

Reminder: UFC made a mistake by releasing Mads Burnell, dude is a badass fighter.

Here we go! We had our very first #BREAKING news moment on our Bellator Preview Show today. A match between top contenders Adam Borics and Mads Burnell is in the works for #Bellator276 on March 11. Both of them are on a 3-fight winning streak. This is a big fight with high stakes pic.twitter.com/5cQMWeTfT8

Julianna Peña and Amanda Nunes are the front-runners to coach the next season of TUF, per sources.

I remember the memes when Ben Parrish won big in Bellator, but I did realize his background was this legit.

In his 4th Pro Fight, he destroyed a Former WSOF Title Challenger in Rd 1.

Got the Bellator call to fight the next “Jon Jones”. Starched him in 38 secs.

If Khamzat Chimaev defeats Gilbert Burns, a title shot is next, right? That’s not to count out “Durinho,” who is a killer.

So your trying to change weight before I come for you? Don’t go anywhere I am coming! I smash you and burns in 2 mins believe me!
I’m THE KING here ☝ @USMAN84kg ⚰️

To be a boxing fan is to embrace disappointment regarding match making.

Sources: An agreement in principle for Dillian Whyte and Anthony Joshua to step aside collapsed after parties attempted to renegotiate at the 11th hour. Now, Tyson Fury will fight Whyte after Friday’s purse bid rather than Oleksandr Usyk in Saudi Arabia. https://t.co/QMt2E3rutk

A fun Carlos Condit throwback with an interesting bit of side info!

Not to mention that Miura moved to boxing 2 years later, went on a 9-fight winning streak, became the No.1 ranked super middleweight in Japan, and didn’t lose until his first title fight attempt. Then he won the Pancrase welterweight title https://t.co/9lTkv5LiCn

I have yet to see the front flip to escape back mount technique actually work, but it’s fun to watch. Tuck that chin!

A bit more than she bargained for …