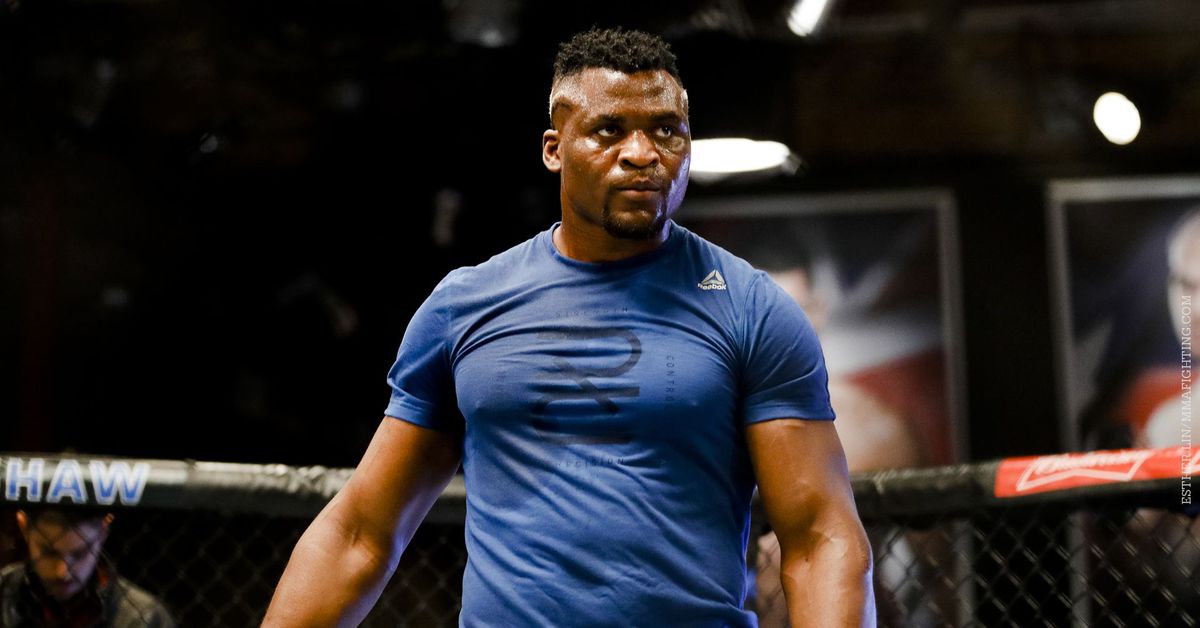 Well, things sure have gotten interesting over the past week.

When last we spoke, Francis Ngannou was staring down the prospect of losing his title to a former training partner, and potentially being done with the UFC. Well, a week later and now only one of those things is true. Ngannou retained his belt by pivoting to wrestling (something I said he should do, if we’re keeping score), and then he put all his cards on the table as far as his UFC future goes — and I’ve gotta be honest, things aren’t looking too hot.

So let’s talk about Ngannou’s future, Jake Paul’s continued presence in the MMA world, and a smattering of other subject matter on this non-UFC weekend.

Do y’feel, that a fighter, Ngannou, in his prime, holding the championship belt, so openly talking about the unfairness of UFC contracts, might, finally, by chance, actually cause change? (did it feel like GSP walking away, saying it was in part due to PED use, bring in USADA…?)

If you haven’t done so already, I highly encourage you to go listen to Ngannou’s interview with Ariel Helwani from this past week. In it, Ngannou says a number of things about his current status with the UFC, but it basically boils down to: “The UFC has treated me very poorly, and if I’m going to continue working with them, they will need to be better.” You can get into specifics about what Ngannou is asking for — the ability to go box, more money, a more consistent schedule, that the UFC not directly undermine his title and accomplishments to satisfy weird personal vendettas — but fundamentally it’s that the UFC treats all its fighters, even champions, as commodities, and he wants to be treated like a person. It’s an exceedingly reasonable request and one that we have seen other fighters in recent years be more vocal about. And if the UFC continues down the path they have been on the last five years, it’s one that will become even more common among their roster.

In 2019, the UFC signed a deal with ESPN that gives the company a substantial guaranteed payout every year, so long as they hit their minimum threshold of events. It’s why when COVID struck in 2020, Dana White was going to put on events come hell or high water, because they had to get to 42 or lose hundreds of millions of dollars. But while that deal has been tremendous for the UFC, it’s been horrendous for the fighters and fans.

With the UFC no longer having to be concerned about quality of fights, merely quantity, the commodification of fighters went into overdrive. Stars simply mean less to the UFC than ever before, and so over the past couple of years we’ve seen well-known and/or great fighters sent packing because they could be replaced by Contender Series prospects making 10 and 10. In short, the UFC has placed profits entirely ahead company culture, and they’re starting to reap what they’ve sown.

Francis Ngannou is woefully underpaid, but he’s still making SUBSTANTIALLY more money than 99.99% of UFC fighters. So if he’s unhappy, just think how many of the others feel.

Personally, I’m hopeful that this may mark some sort of turning point for the UFC. I’m not naive enough to believe that Ngannou speaking out about this stuff will change the UFC’s business wholesale and get them to give up an equitable split of revenue to fighters, but I am hopeful that the sheer volume of bad press stemming from this and Jake Paul will at least make somebody at Endeavor take notice and step in, because the truth of the matter is things that don’t bend eventually break.

The UFC is currently a profit machine for Endeavor based in large part on the fact that the organization is fleecing the fighters out of revenue that should go to them. But if the UFC continues to be such obstinate hardliners about everything, the whole thing will go belly up and then fighters won’t be coming for a boxing option (WITH THE UFC CO-PROMOTING, BY THE WAY) or a pay raise — they’ll be coming for the half they deserve.

Will the UFC create another interim belt because Ngannou will sideline for the rest of 2022 ?

Without question. Frankly, they probably haven’t done so already because any interim title fight will have to include Jon Jones, and Jones figures to be equally as difficult to negotiate with as Ngannou. But the moment that it becomes clear to Dana White that the UFC and Ngannou are done, that’s when the UFC will back up the money truck to Jones and put an interim belt in his hands. Because for as much as White wants to pretend that everything is roses and sunshine between the UFC and Ngannou, there is an extremely real chance that the heavyweight champion leaves the UFC at the end of the year, and they will want to diminish that news as much as possible. Getting Jones the heavyweight title would be the simplest way forward, and then the company can go about its business as usual.

Bad publicity is too much when it starts to tangibly effect the bottom line of the company, because at that point, the people who are in charge of Dana White start getting phone calls they don’t want to deal with. Think back to 2020 when White was going to put on some shows in California right when COVID broke out, but was then ultimately delayed when the story went wide. White didn’t postpone any events because he felt shame about anything or was concerned about safety; he did it when U.S. Congresspersons began calling Disney executives, who in turn told him to shut that sh*t down. And as suggested above, I think we are getting near a similar inflection point yet again.

As for why Bellator hasn’t take over well, there are numerous factors, I’m sure, but the simplest two are that: 1) Bellator isn’t some brilliantly run organization either, and, 2) a monopsony is a hell of a thing. In the broader cultural conscience, MMA is the UFC, and that’s a nearly insurmountable advantage, especially when you have a dumb name like “Bellator” and your events are on Showtime.

If Justin Gaethje wins against Oliveria, do you seem him defending the title this year? He seems like he’ll be another title holder that fights once a year.

OK, enough about Ngannou and the UFC’s ethically questionable negotiation tactics, let’s talk about some other big news that dropped this week: Charles Oliveira and Justin Gaethje will officially be scrapping for the UFC lightweight title. It’s the fight that should happen next, and I’m glad there won’t be any Conor McGregor shenanigans interfering here.

As for the fight and its aftermath, I honestly have no clue who is going to win. If you’d asked me last month, I would’ve said Gaethje for sure, but Oliveira’s performance against Poirier was so impressive that I’m now 50/50.

If Oliveira can get takedowns, he’ll beat Gaethje. But if he gets into a slugfest with Gaethje, like he did with Poirier, the champ is getting fitted for a wood coat. And if Gaethje does win, I don’t think you have anything to worry about as far as his activity goes. Because Gaethje has been in the title hunt these last few years, that has dictated his activity level to some extent — he had an interim belt and had to wait for the champion, then the division was jammed up. But if he wins the belt, I’d fully expect Gaethje to defend his title in the fall or winter and do so against the winner of Islam Makhachev vs. Beneil Dariush.

What stands out to you when thinking about the UFC career of Jeremy Stephens?

In case you missed it, after a 34-fight stint with the organization, Jeremy Stephens is out of the UFC. It’s not terribly surprising given that he hasn’t won a fight since 2018, but it’s still sort of a bummer. Stephens is fourth all-time in UFC fights, tied for second all-time in UFC knockdowns, and tied for eighth all-time for Fight of the Night bonuses. He’s been a staple of the organization for the last 15 years and it’s strange to think of a UFC without him.

As for his career, Stephens had rocks for fists, a hell of a chin, and was a tough out for anyone, but he was never a truly elite fighter — and that’s OK. Not everyone gets to be a champion, and the sport would be substantially better with more guys like Stephens around, guys who were always looking for a fight even when it was a bad idea.

The quintessential Stephens moment is, sadly, that time where he tried to pull a Nate Diaz on Conor McGregor only to have his whole career ruined by a quip. But for me, the first thing I’ll always think of is the Mortal Kombat uppercut he knocked out Rafael dos Anjos with. He throws the thing from his ankles and lands it cleanly on a guy who went on to become the UFC lightweight champion of the world. It’s awesome.

Thoughts on us seeing Khabib go 30-0 on Eagle FC’s first PPV after his 5 years runs out with the UFC?

I’ve gone on the record that I believe by the end of this year Khabib will announce his intention to return to MMA competition, but when he does so, it will be for the UFC. My reasoning is this: Khabib left the sport because of the passing of his father, which is entirely understandable. But Michael Jordan did the same thing with basketball, and then after some time away and being around other guys who played the game, Jordan realized he wanted to come back. I think the same thing will happen with Khabib, but when he wants to return, it will be to face the best in the world, not Kevin Lee or whoever is in Eagle FC. Khabib’s run in Eagle FC will come many years later when the promotion is floundering and needs a boost. Like Jordan with the Wizards.

Is it too soon to start talking Adesanya vs Whittaker? I remember being so stoked their first fight and Izzy had the iconic walkout followed by his best performance to date?

Of course it’s not! UFC 271 is in two weeks and the only major event between now and then (unless you count Bellator as major, which, meh) is a Fight Night event that isn’t exactly star-studded. With 270 in the rear-view, all eyes are on the Adesanya vs. Whittaker rematch, mine included. In fact, I’m WAY more excited about the rematch than I was their first outing.

In their first fight, I had difficulty getting too pumped because I was so certain that Adesanya was going to work Bobby Knuckles. From a stylistic matchup and the way Whittaker was talking, I just knew how the fight was going to go. But this time around? I have no idea. Whittaker has looked incredible since the loss and he’s spoken openly about being in a bad space before their first encounter, and how he’s past all that now. But at the same time, Adesanya looks locked in for this rematch. Anything is possible in this rematch and I’m stoked.

Thanks for reading and thank you for everyone who sent in Tweets! Do you have any burning questions about things at least somewhat related to combat sports? Then you’re in luck, because you can send your Hot Tweets to me, @JedKMeshew, and I will answer them! Doesn’t matter if they’re topical or insane. Send them to me and I’ll answer the ones I like the most. Let’s have fun.