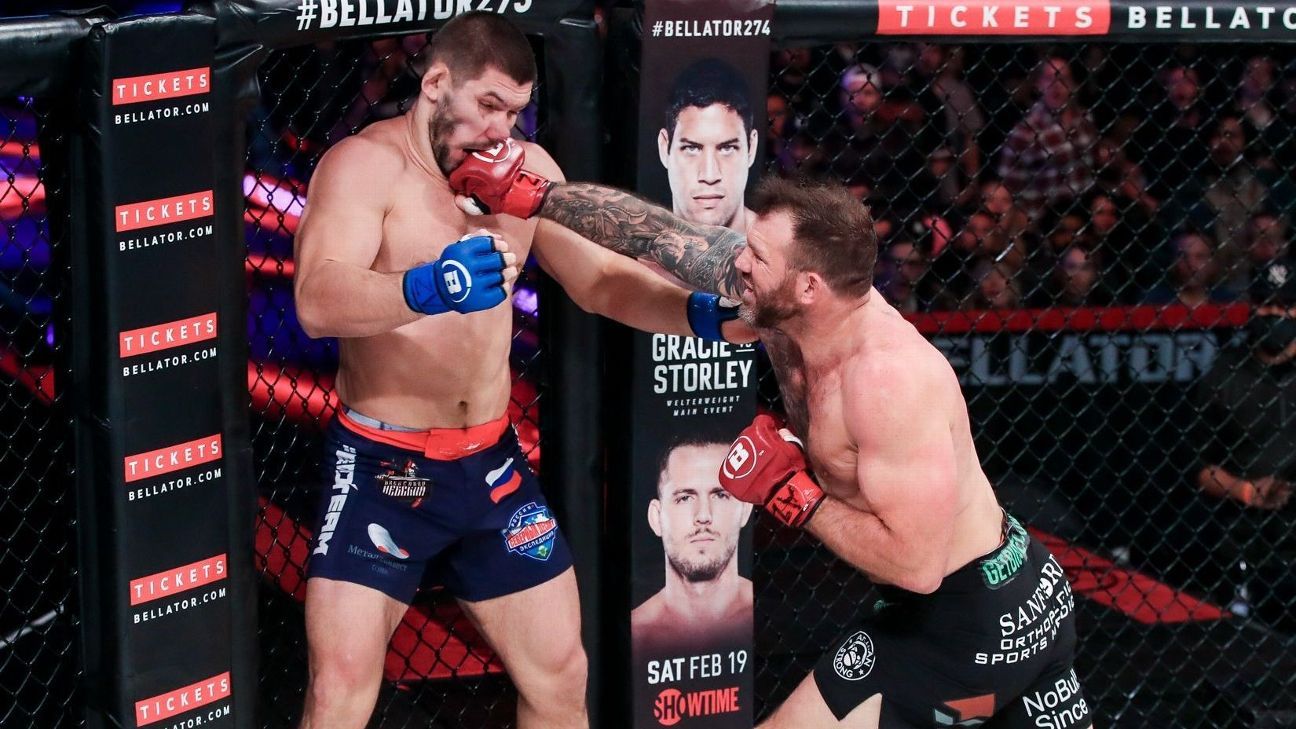 Ryan Bader is back at home and still on top.

Defending his heavyweight championship for the first time in 2½ years, Ryan Bader picked up where he left off by grinding out a tight but unanimous decision over Valentin Moldavsky in the main event of Bellator 273 on Saturday night in Phoenix, Arizona.

Bader (29-7, 1 NC), who is also a former light heavyweight champ, had been away from heavyweight while he was unsuccessfully attempting to regain his 205-pound belt in the Bellator Light Heavyweight World Grand Prix. During that time, Moldavsky won an interim heavyweight title. This fight was to unify the titles.

The 38-year-old Bader was a clear crowd favorite in his adopted hometown, where he has lived and trained since being a two-time Division 1 All-American wrestler at Arizona State nearly 15 years ago. His wrestling was put to the test by Moldavsky (11-2), whose Greco-Roman and sambo attacks put the champ on the defensive whenever the fighters engaged in clinches. The 29-year-old from Ukraine landed eight takedowns on 16 attempts.

But Bader was the one doing more damage in the fight. He landed an overhand right hand in the first minute that wobbled Moldavsky, then followed up with two more that had the challenger hurt. “I knew I had him rocked,” Bader said, “but I’ve been in this game too long to go after it. You let it all hang out in the first round, then you’re dead. So I knew I had to pick my shots.”

It took a while for Bader to get another chance to do so. Moldavsky took him down repeatedly and rode Bader from top position for the bulk of the second and third rounds, turning the tide. But in Round 4 Bader landed two takedowns of his own, and each time he seized a dominant position and landed ground-and-pound strikes.

With the fight even going into the final round, Bader landed several strikes in the standup, including a right hand that caught Moldavsky’s attention. And as the challenger attempted another takedown, Bader unloaded several short elbows to the head before being thrown to the canvas, where the bout ended.

“That fight was really close,” Bader said. “I thought it was [mine] — did more damage, rocking him. The last round, he was holding on and I was throwing elbows. There were probably 30 strikes to the head there, unanswered. I knew it was close going to the bell.”

All three judges scored the bout 48-47 in favor of the champ, who right after the fight learned that his next title defense will come on May 6 against Cheick Kongo. It will be a rematch of a 2019 title bout that ended in a no-contest after an accidental eye poke rendered Kongo unable to continue.

Moldavsky (11-2), a 29-year-old from Ukraine, was attempting to complete a revenge tour of sorts for the team of legendary heavyweight Fedor Emelianenko. Bader had become a champ-champ in 2019 by knocking out Emelianenko in a mere 35 seconds to win the Bellator Heavyweight World Grand Prix. Moldavsky is an Emelianenko protege, as is Vadim Nemkov, who dethroned Bader at light heavyweight in 2020.

In the co-main event, former UFC lightweight champion Benson Henderson won by split decision to end his own three-fight losing streak and also the 20-fight undefeated streak of his opponent, Islam Mamedov.