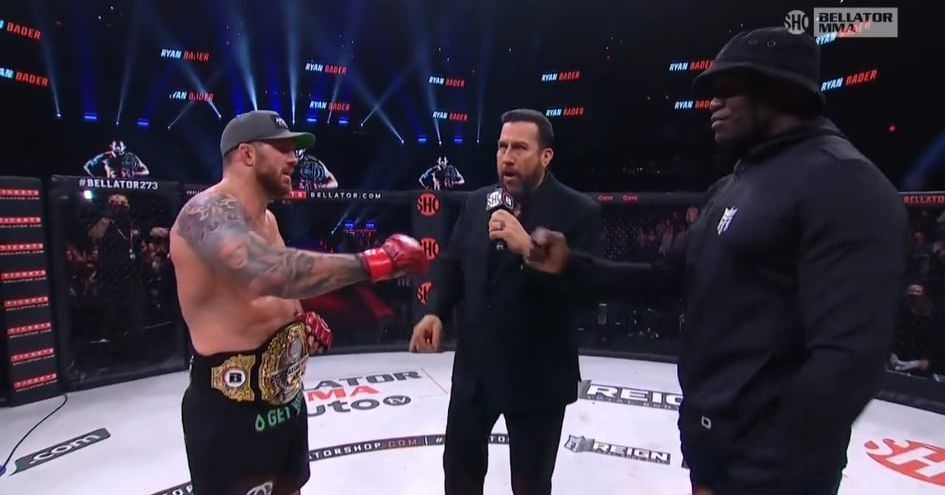 Ryan Bader came into his Heavyweight title unification bout against interim titleholder, Valentin Moldavsky, at Bellator 273 in somewhat of a must-win situation because he was coming off a lightning-quick knockout loss to Corey Anderson at Bellator 268.

Two fights before that defeat, “Darth” suffered another knockout loss, this time at the hands of Vadim Nemkov, who took the former double champion’s Light Heavyweight title from him at Bellator 244 in Aug. 2020.

After five rounds of grueling, back-and-forth grappling action, Bader found a way to get back in the win column after earning a hard-fought unanimous decision win against a man who hadn’t tasted defeat inside the Bellator cage.

Bader almost had the fight in the bag in the opening seconds after tagging Moldavsky with two huge right hands the rocked and dropped him. After a few moments, the Russian big man was able to shake off the cobwebs and continue on his dominate grappling ways.

Undeterred, Bader upped his own wrestling strategy and went head-to-head against Moldavsky in what truly was a spectacular grappling performance from both men. With the win, Bader remains undefeated as a Heavyweight at 4-0-1.

But there will be no rest for the weary as Bader already has his next title defense lined up when he takes on Cheick Kongo in the main event of Bellator Paris on May 6. The two men fought at Bellator 226 in Sept 2019, though the fight ended in a No Contest (NC) due to an inadvertent eye poke in the very first round.

Jake Paul Vs. Tommy Fury Gets ‘Platinum’ Backup Plan
‘I Regret Not Being This Monster I Am Again’
Marlon Vera vs. Cory Sandhagen shifts to UFC on ESPN 43 in San Antonio
‘Rampage’ Jackson Still Wants To Fight His TUF Bully Victim
UFC 259: Blachowicz vs Adesanya – I Know What True Greatness Is | Fight Preview