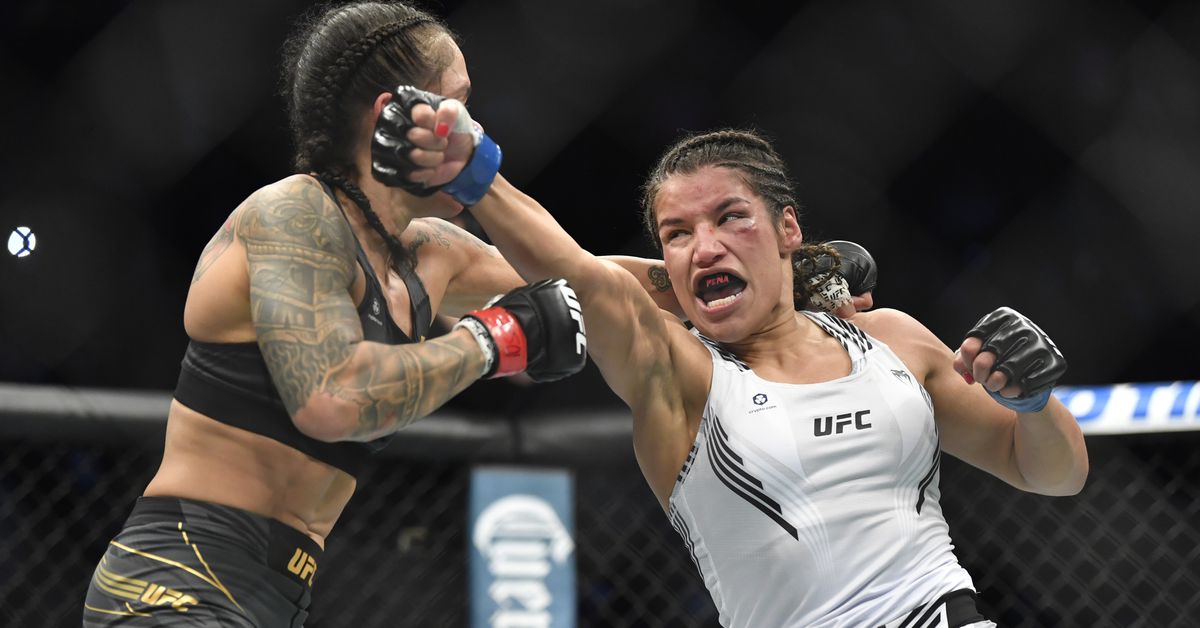 Julianna Pena scored one of the biggest upsets of all time — let alone in a title fight — when she toppled two-division champ Amanda Nunes at UFC 269 in December 2021. However, not everyone is fully impressed.

At a recent Eagle FC press conference, Khabib Nurmagomedov was asked about the fight and women’s MMA … and he hasn’t changed his tune.

“I am like, we can watch what Julianna Peña did with Amanda Nunes [at UFC 269]. But Julianna Peña, she is not like the greatest or something like that,” Nurmagomedov said (via MMAnews). “She just beat Amanda Nunes like [on the day]. We can watch not many good [female] fighters all around the world. There are only like five or six of them.”

Understandably, Pena herself wasn’t exactly pleased with his analysis. A big fan of “The Eagle,” Pena explained on The Joe Rogan Experience how much the comment hurt her feelings.

“I saw in a presser that they asked [Khabib] a question and he was just completely downgrading the whole win and everything like that….it totally broke my heart…” Pena said. “I was like, ‘Dude, you’re breaking my heart, man. Like, I freaking love you. Like, seriously.

“He must be friends with Kayla Harrison or something. I don’t know. Because he was like, [MOCK KHABIB ACCENT] ‘If this is the top of women’s division, it’s a joke,” Peña said. “I mean, it wasn’t very nice. I didn’t appreciate it, Khabib.”

Ultimately, fighters can never impress everyone, though it’s extra painful when criticism comes from a highly respected peer. Still, Pena has a chance to impress once more in the eventual rematch, which may occur after a season of The Ultimate Fighter.

As far as I know, California is the only state remaining that releases fight pay information … but for how long?

Add Arizona to the list of states no longer publicly releasing fighter pay, per commission spokesperson.

“The Boxing & MMA Division no longer retains purse information/payouts from events in the state. I would suggest reaching out to the promoter to obtain that information”

This might seem a touch stupid in hindsight, but at the moment, Nick Diaz daring to do so against Anderson Silva — highly favored to knock him out — was badass.

Even prior to Francis Ngannou vs. Ciryl Gane, I thought this fight was a really interesting style match up. People still sleep on Curtis Blaydes too much!

Randy Couture is speaking from experience, and he doesn’t expect a positive end to the Ngannou vs. UFC drama.

Letting someone hang onto your neck for THIS long is generally a bad idea.

This man really baited his opponent into taking a bad shot and getting sprawled on. Genius!

Iminari rolls are sick when they work!

If Joshua can’t get a title fight, he’d consider Ngannou
Watch BROADENED HORIZIN — Feat. Dodson, Inoue, Motoya
Kattar Lands a 💣 !!
Jaylon Bates out to set blueprint on how to beat Jornel Lugo at Bellator 290: ‘I’m coming to finish him’
Alexander Volkanovski doesn’t want to hear excuses about no Khabib after he wins at UFC 284