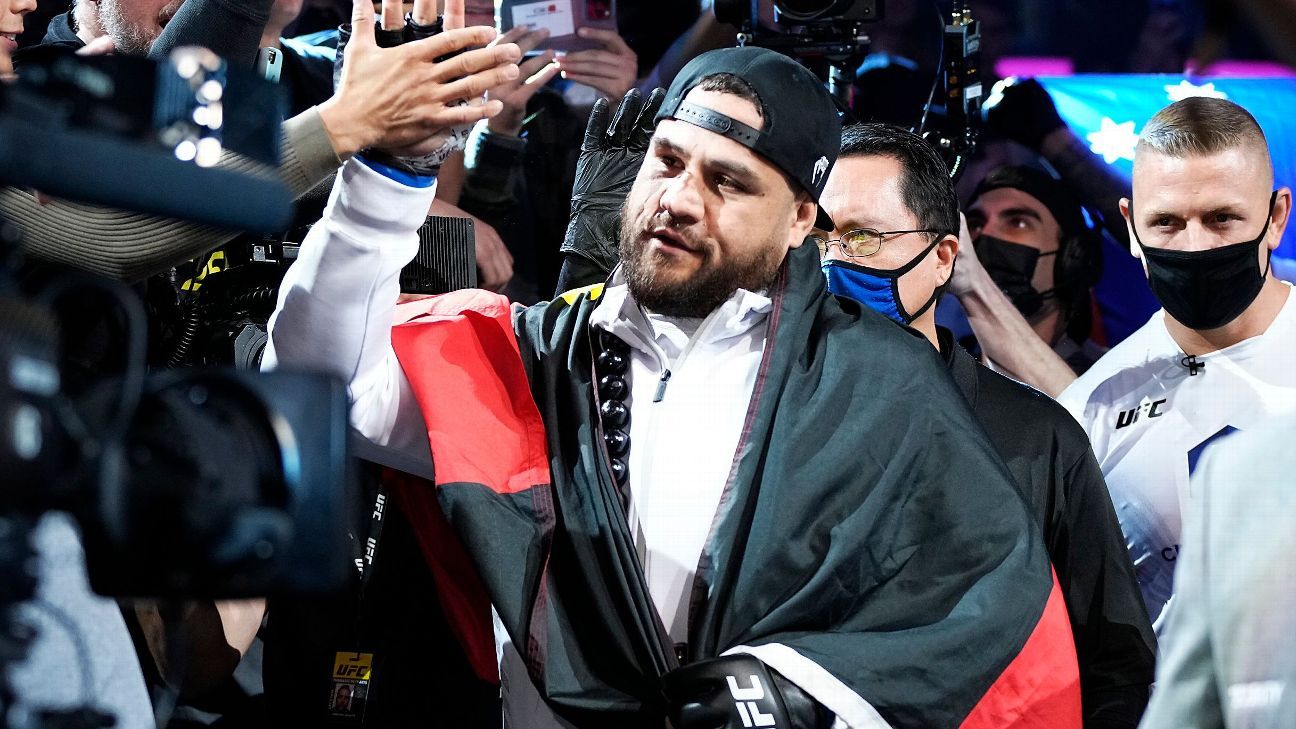 Australian fighter Tai Tuivasa said his heavyweight bout with Derrick Lewis is a fantastic opportunity, even if he agreed to the UFC 271 showdown against the American while “pissed.”

Riding a four-fight win streak after a bumper 2021 that saw him defeat Harry Hunsucker, Greg Hardy and Augusto Sakai, Tuivasa has solidified himself as one of the chasing pack of UFC heavyweights.

But Lewis represents a significant step up from those opponents, with his No. 3 ranking making him the most formidable opponent Tuivasa has faced in his career to date.

There are no reservations on the Australian fighter’s part, however, despite his hazy recollection of the initial negotiation process.

“I was on the piss; I was blind [drunk],” Tuivasa revealed to ESPN. “I didn’t notice until the next morning that [UFC matchmaker] Mick Maynard messaged me and I had messaged back. He messaged, ‘Are you awake,’ and I was like, ‘Yeah’; it was like 4:30 in the morning.

“And then I woke up to 20 missed calls from my manager, from my coach Sully [Shaun Sullivan] and s— like that, so I was like, ‘Something must have happened.'”

“And then it come up, and why not? Why wouldn’t I?” Tuivasa continued. “It’s a great opportunity. Obviously, he’s No. 2 or No. 3 or whatever he is. He’s a fan favourite; I’m a fan favourite. I really respect Derrick, what he’s done and the person he is.

Tuivasa’s UFC career was hanging by a thread after he suffered defeats to Junior Dos Santos, Blagoy Ivanov and Serghei Spivak across 2018 and 2019. But the 28-year-old fighter at last snapped that three-fight skid against Stefan Struve in October 2020, setting in motion his rise back up the heavyweight rankings.

A move to Dubai, United Arab Emirates, to train as well as and the chance to work with Daniel Cormier at the American Kickboxing Academy in California have been pivotal in Tuivasa’s improvement, resulting in a far more professional approach to his MMA career.

“Consistency, I’ve been real consistent for the past year and a bit, just staying on the ball since my losing streak; I kind of used to just fall off the end and disappear,” Tuivasa told ESPN. “I’m not saying I don’t still [go off the radar], sometimes.

“But just that stuff, just learning, keep learning,” he continued. “And I think that’s the best thing about MMA, is that as much as you think you know, you’re never going to stop learning in this sport. There’s always someone smart coming up with some s— to break your arm or break your neck. It’s a crazy thing, and I love it.”

While he has been working hard on the weaker points of his MMA arsenal, Tuivasa believes the fight with Lewis will still be decided by who is able to better land his shots.

“Of course, I’m learning this stuff, but it doesn’t mean it’s going to change me as a person. I’m a fighter,” Tuivasa said. “I’m definitely not going to go out and run for his legs; that’s just not in me, and it’s not my style, and I don’t think it’s his style.

“I’m younger, I think I’m faster, I’ve got the aggression, and my style is probably going to be really hard for him. But I’ll worry about me; Derrick’s the same, as he worries about himself and what he’s good at. So that’s what the fight’s going to be. It’s going to be a battle of that — who’s going to land the shot first, and who’s going to execute it the best. And I feel like I’ve got what it takes to put him away.”