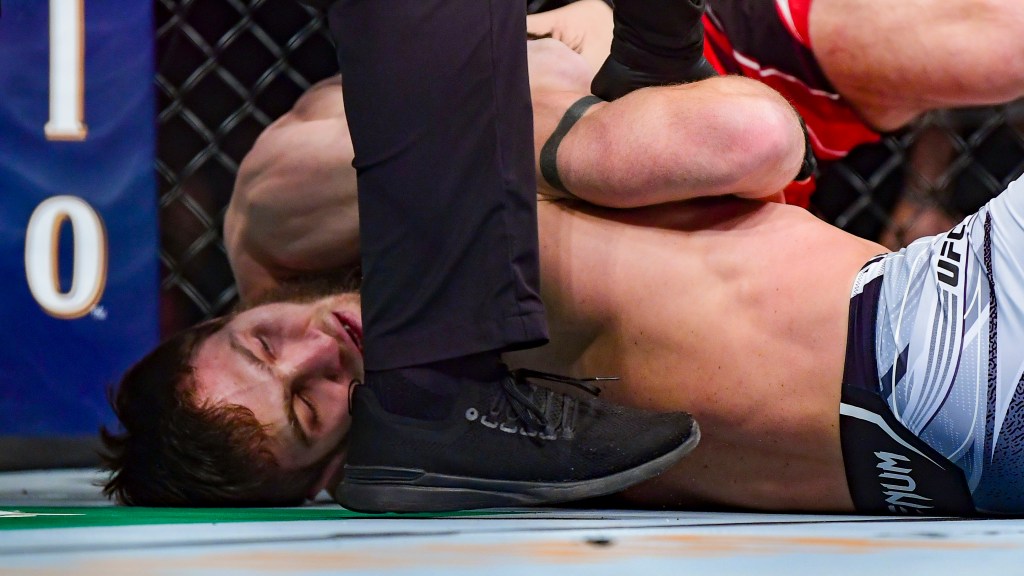 With another action-packed month of MMA in the books, MMA Junkie looks at the best submissions from January 2022: Here are the five nominees, listed in chronological order, and winner of MMA Junkie’s Submission of the Month award for January.

At the bottom of the post, let us know if we got it right by voting for your choice.

Canadian veteran Katie Saull (4-5) showed why her ground game is arguably the most dangerous part of her game in an atomweight bout with Tamika Jones (1-1).

Saull pulled her record above .500 when she locked in a tight armbar on Jones during a transition in the opening round of the contest.

The fight started out, as every fight does, in the striking department. Both men landed punches, but when the fight hit the mat, it was all Collier. He mounted Sherman and landed brutal ground-and-pound before he swiftly submitted his fellow behemoth with a rear-naked choke.

The win was Demopoulos’ first in the promotion and it did not come without adversity. The finishing sequence actually came after she was dropped by a Juarez punch. She quickly turned the tables, however, and clamped on an armbar that forced the tap. Her post-fight interview was even more entertaining, as she leaped into Joe Rogan’s arms.

Nurmagomedov absolutely steamrolled Stamann in the bout. He locked in a guillotine choke when both men were dry very early on, but he wasn’t letting go. Nurmagomedov stayed on the attack and kept chasing it until he got the tap just 47 seconds after the fight began.

Loik Radzhabov (16-4-1) tore through and overmatched and undersized Zach Zane (15-10) in the first round of their lightweight bout.

Radzhabov put pressure on Zane, and eventually waited for the opening to latch on a guillotine choke. It came from a standing position and Zane couldn’t find a way out, so he was forced to tap less than three minutes after the bout began.

Nurmagomedov had a quick night at the office.

The Dagestani took little time to dispatch bantamweight veteran Stamann on the UFC 270 main card at Honda Center in Anaheim, Calif. Nurmagomedov submitted Stamann with a guillotine choke at the 0:47 mark of Round 1.

Nurmagomedov immediately went at Stamann with hard, explosive kicks and punches. Stamann initiated the grappling in response to Nurmagomedov’s strikes, but was quickly caught in a guillotine choke. Stamann had no time to fight it, as it was extremely deep. He was forced to tap a few seconds after the choke was locked.

It was a swift and dominant showing by Nurmagomedov.

With the result, Nurmagomedov is 9-1 in his past 10 bouts. His most recent defeat came in 2019 when came up short in a unanimous decision in his third UFC bout against Raoni Barcelos.

Meanwhile, Stamann is now on a three-fight losing streak, having lost to Jimmie Rivera and Merab Dvalishvili via unanimous decision in previous bouts. His most recent win came against Brian Kelleher in June 2020.