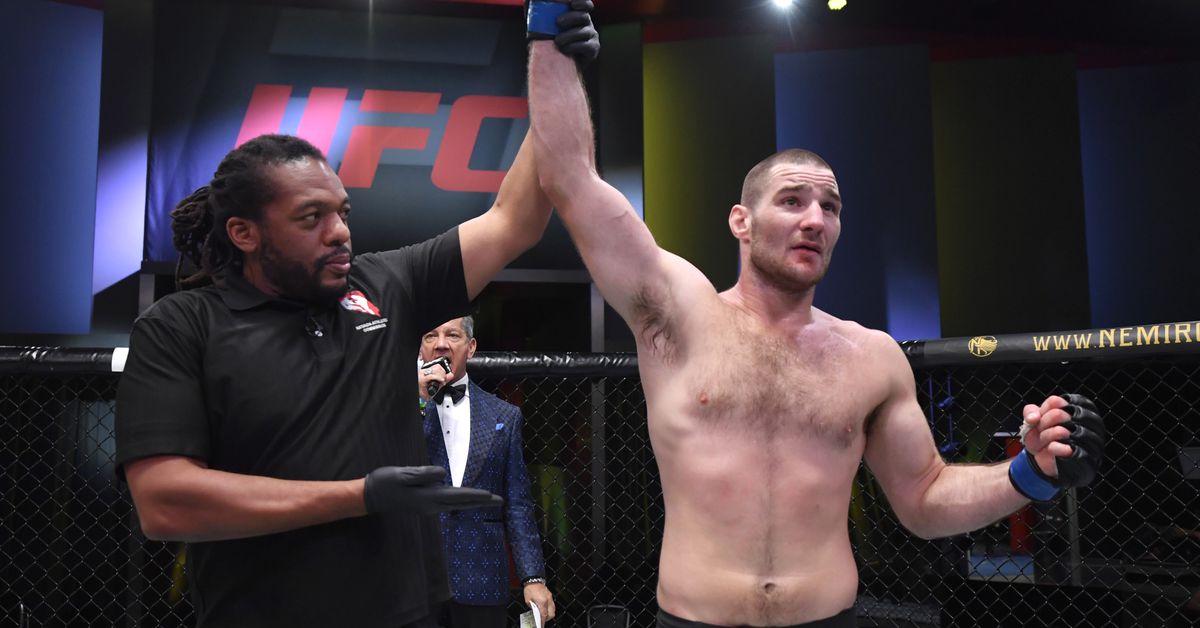 Sean Strickland has risen to the elite of the Ultimate Fighting Championship (UFC) 185-pound middleweight division. Along the way, he’s expressed literally whatever is on his mind. In many cases, this could be problematic when working on such a popular platform such as ESPN+. However, as the 30-year-old New Bern, N.C., native now finds himself firmly in UFC’s Top 10 with a growing fanbase, he believes with it comes protection.

“I’m getting to a point where I can say s—t and not get cut from the UFC,” Strickland told media during UFC Vegas 47 media day (listen to it here). “Before, it’s like, ‘Oh man, I wasn’t good.’ Like, I couldn’t say s—t because Dana White would be like, ‘Hey, go f—k that white trash motherf—ker. Get him out of here.’ But now, since I’m growing a little bit more like, you know, fan base, people want to watch me fight, I can say a lot more offensive s—t.”

Strickland’s lack of a filter has cost him on social media as he recently found himself banned from Instagram. It wasn’t long before he then became more active on Twitter where he sparked up some controversy for his thoughts on “failing as a man” if he had a gay son.

The No. 7-ranked middleweight would go on to explain his reasoning in follow-up tweets. He wouldn’t quite walk it back though, giving a similar explanation on Wednesday.

Riding a solid five-fight win streak heading into this Saturday night’s UFC Vegas 47 main event against Jack Hermansson, it’s not at all out of the realm of possibility to see Strickland challenging for UFC gold in 2022.

If Strickland can achieve champion status, he equates his potential outside the Octagon to that of Conor McGregor’s.

“No, it’s even better then because when you’re a champion, I could go full, like, Conor McGregor,” he said. “I could go f—king hit an old guy in a bar. F—king throw a f—king — trying to f—king assault Khabib [Nurmagomedov’s] manager, Ali [Abdelaziz]. You know, it’s f—king even better, dude.”

The timing of Strickland vs. Hermansson comes perfectly for the American. At UFC 271 next weekend on Feb. 12, 2022, the division’s title will be on the line when Israel Adesanya looks to defend against the man he took the belt from, Robert Whittaker.

The reigning “Last Stylebender” has already bested Brunson when meeting in Nov. 2018. Therefore, Strickland sees himself with a better shot at the UFC 271 main event winner if Brunson can defeat Cannonier.

“I mean, ideally, Brunson beats Cannonier, and maybe if I do an impressive performance, I can, you know, dump and dodge and get a title shot,” Strickland said. “That’d be the perfect world, but at the end of the day, man, I’m just here to fight, make some money.

Remember that MMAmania.com will deliver LIVE round-by-round, blow-by-blow coverage of the entire UFC Vegas 47 fight card right here, starting with the ESPN+ “Prelims” matches, which are scheduled to begin at 4 p.m. ET, then the remaining main card balance (also on ESPN+) at 7 p.m. ET.

To check out the latest and greatest UFC Vegas 47: “Hermansson vs. Strickland” news and notes be sure to hit up our comprehensive event archive right here.