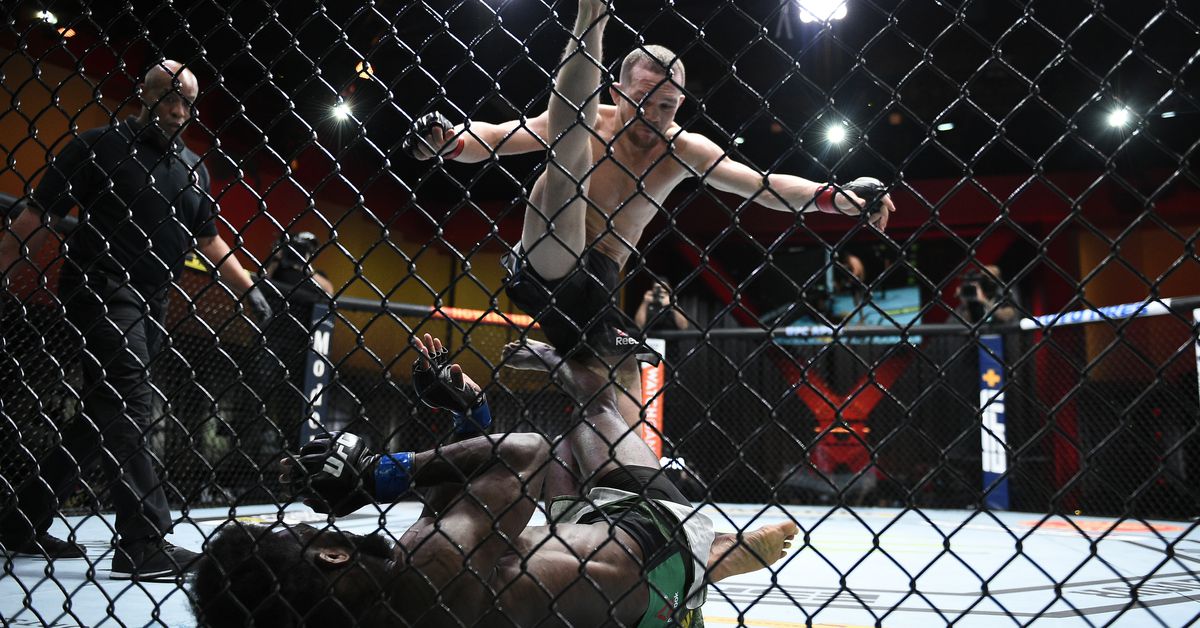 Aljmain Sterling is still getting s—t for his disqualification victory over Petr Yan.

It’s not at all Sterling’s fault that Yan threw a blatantly illegal knee, costing himself the UFC title in the process. However, fans, as well as Yan himself, have labeled Sterling an actor, and he’s constantly taking digs on social media as a result. Responding to one such instigator on Twitter, Sterling denied that he was behind in the first bout, arguing that he “won every exchange.”

Sterling has had ten months to reflect on his title bout vs. the Russian, and his conclusion is an interesting one. First and foremost, two of the three judges had Yan ahead on the scorecards prior to the illegal knee. Otherwise, it’s hard to argue that Sterling won every exchange when he was the only man knocked down.

Plus, fighters winning the kickboxing rarely shoot 17 times and only finish the shot once.

In truth, the fight was really looking like a Yan masterclass. The Russian striker’s high guard was deflecting the majority of the offense thrown his way, and when he did unleash his own strikes, they were accurate and powerful. He was the more efficient man, and Yan’s fourth round was looking to be his best of the fight as a result.

Of course, all that is only one analyst’s opinion. One way or another, the two will have another chance to prove who’s the better man and deserving Bantamweight champion when they meet at UFC 273 on April 9, 2022 … unless Sterling pulls from the fight, as Yan has predicted.

Lightweight banger alert! It’s hard to keep track of just how many great prospects are hanging around at 155 lbs.

We’ve had a lot of brawls mid-staredown lately, and I am thankful.

Sean Strickland’s boxing style doesn’t always impress fans visually, but the man hits without getting touched much in return.

Some dude on Reddit dislikes Sam Alvey to the point that he put together an extended highlight reel of his current seven-fight winless streak. Generally, I try to avoid crapping on fighters needlessly, but certain exceptions can be made …

Tired of getting heel hooked? Here’s your fix!

This looks like an uncomfortable position, but I don’t know what’s actually doing the submitting here. It’s pretty difficult/unusual to finish a triangle from here, and the arm isn’t being cranked … yet. Cool scramble though!

I was linked this Sumo compilation by MMAmania’s own Cory Braiterman:

A demonstration on why posture control is generally a good idea.

Monstrosity or masterpiece? You decide.