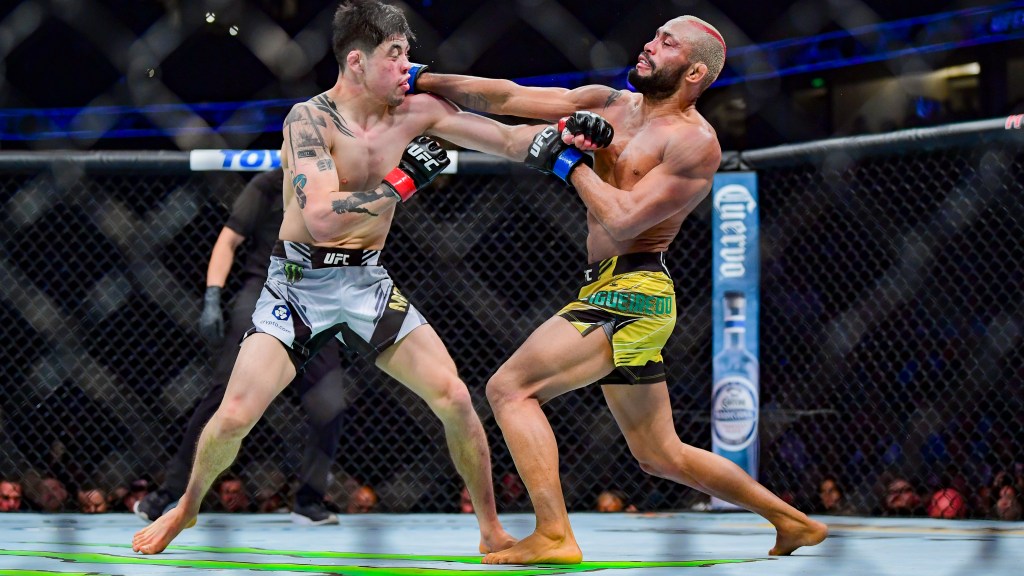 With another action-packed month of MMA in the books, MMA Junkie looks at the best fights from January 2022: Here are the five nominees, listed in chronological order, and winner of MMA Junkie’s Fight of the Month award for January.

At the bottom of the post, let us know if we got it right by voting on your choice.

In what promised to be an all-action affair, the fighters turned in five rounds of high-paced war, surpassing expectations. When it was all said and done, Kattar recorded a clean sweep against Chikadze with scores of 50-45, 50-45, and 50-44 from the judges.

Figueiredo fought rival Moreno for the third consecutive time in the span of 408 days/ He emerged with a unanimous decision win after another back-and-forth battle, marking his second reign as a 125-pound titleholder.

After falling behind early in the striking exchanges, Borg went to his grappling and managed to grind his way to a unanimous decision win over Gibson in the bantamweight bout. He got stronger as the fight wore on, and Gibson ultimately slowed down and couldn’t keep up with Borg’s pace and pressure.

Henderson grinded out a split decision against Mamedov in a lightweight fight that saw big momentum swings and submission attempts from both fighters. Henderson took the fight with a pair of 29-28 scorecards, while one judge had it 29-28 for Mamedov.

Featherweight prospects Jose Perez (6-1) and Paul Capaldo (6-1) gave a memorable featherweight scrap as they look to gain notoriety and traction in the MMA world.

Both men went tooth and nail over the course of three rounds. Perez hurt Capaldo and vice versa in the bout, but ultimately Perez did the more punishing work and was rewarded for it in the form of a unanimous decision that sent Capaldo packing with his first career defeat.

The winner: Figueiredo vs. Moreno

This was the third time Moreno and Figueiredo met in the octagon. Their series of fights was the first trilogy in the UFC to go down consecutively. The two first met at UFC 256 in late 2019, which ended in a majority draw, and then a second time at UFC 263 in 2020, which ended in a third-round submission for Moreno.

It was a close and competitive bout.

In the first two rounds, Moreno and Figueiredo went back-and-forth. Moreno was mainly pressing Figueiredo, while the Brazilian seemed content to lean back and counter.

Figueiredo was landing strong leg kicks that were buckling Moreno. However, Moreno was mixing it up and connecting often to the body and head. The two connected hard shots, but Moreno seemed to stun the Brazilian multiple times.

The third round was the clearest round of the fight.

Figueiredo took down Moreno against the cage, but Moreno quickly got back up. In one of the exchanges, Figueiredo clipped and stunned Moreno with a left hand. Moreno lost balance and was connected again by Figueiredo. Moreno did a good job at fighting back and getting back in the contest, but towards the ned, Figueiredo dropped Moreno with a right hand with seconds remaining. Once on the ground, Figueiredo tried to lock up a guillotine but ran out of time.

The fourth and fifth were very competitive. Both fighters had their moments and connected often throughout the fight. Figueiredo was doing clear damage with the leg kicks, but Moreno kept firing back with combinations. It seemed that Figueiredo packed the most power and did the most damage from the exchanges. The two closed the fight in a wild brawl in the final seconds until the bell rang.

Boxer Liam Wilson Accuses Opponent Of Weigh-In Tampering
Islam Interested In Move To Welterweight: ‘I Love Big Fights’
Khamzat Chimaev, Abubakar Nurmagomedov Get In Cageside Scuffle After UFC 280 Main Event
Pound-For-Pound No.1 is on the line in Perth! 😤
Loughnane-Moraes to kick off 2023 PFL season