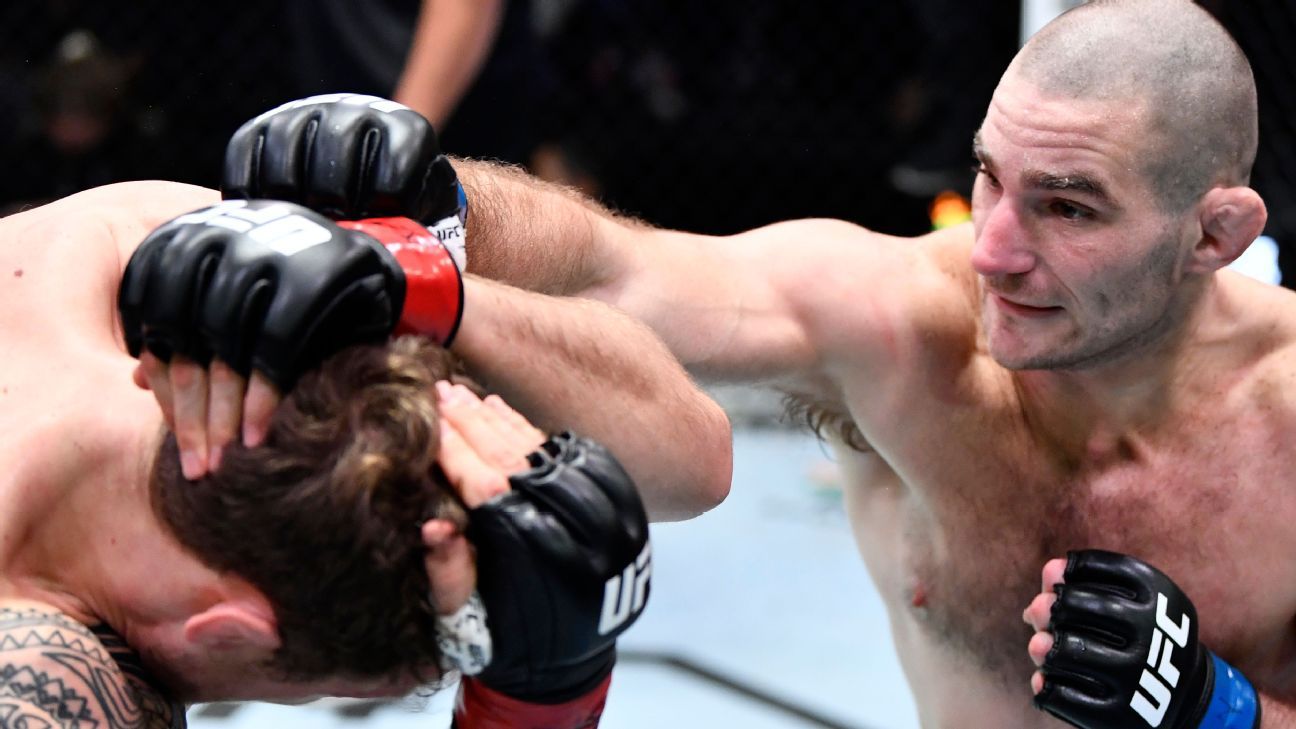 The controversial Sean Strickland continues his rise in the UFC’s middleweight division.

Strickland defeated Jack Hermansson via split decision (49-46, 47-48, 49-46) Saturday in the main event of UFC Fight Night in Las Vegas. Strickland used his jab to keep Hermansson at bay the entire fight. Hermansson did not succeed on any takedown attempts and Strickland was the clearly the superior tactical striker, albeit not an aggressive one.

“I was being a pansy,” Strickland said in his postfight interview. “I should have stayed in the pocket and thrown like I did at the end. Maybe, I let the pressure get to me. Again, sorry. I was fighting like a b—- out there. Sorry. … Lesson learned. Won’t happen again.”

“I’m a company man, I’ll fight who you put in front of me,” Strickland said. “But if he has the belt, I’ll be very happy.”

The crass Strickland has been criticized for insensitive comments he has made over the last few months, in addition to several in-gym sparring mishaps that surfaced on social media. Last August, Strickland said that he “would love nothing more than to kill somebody in the ring” and that it would make him “super happy.” Strickland tweeted in December that he’d feel like he “failed as a man” if he had a gay son.

On Saturday, Hermansson got off to a solid start in the first round with calf kicks. But Strickland got into a rhythm pretty quickly, pumping that jab and angling out before Hermansson could counter with punches or a takedown attempt. That was the story of the fight. Strickland dropped Hermansson with a right hand at the end of the second round, but it was more of a slip than a full drop. Hermansson landed a Superman punch in the fifth and final round and started to bring the fight to Strickland, but it was too little, too late.

“I would like to think his face shows the result,” Strickland said. “No offense, Jack. You’re a killer. But it is what it is.”

Strickland (25-3) has won six straight, most recently before Saturday a unanimous decision win over Uriah Hall last July. The North Carolina native, who trains out of Las Vegas, has won 10 of his last 12 fights overall. Strickland, 30, is undefeated since moving up to middleweight from welterweight in 2020. His recent success is even more impressive considering he was struck by a car while riding a motorcycle in December 2018. Strickland sustained several injuries, including damage to his knee that needed surgery to repair.

Hermansson (22-7) had won six of his last eight fights coming in. The Sweden native, who lives and trains in Norway, was coming off a unanimous decision win over Edmen Shahbazyan last May. Hermansson, 33, owns wins over the likes of Kelvin Gastelum and Ronaldo “Jacare” Souza.

Afterward, Strickland thanked the fans and said they were the ones who write his checks.