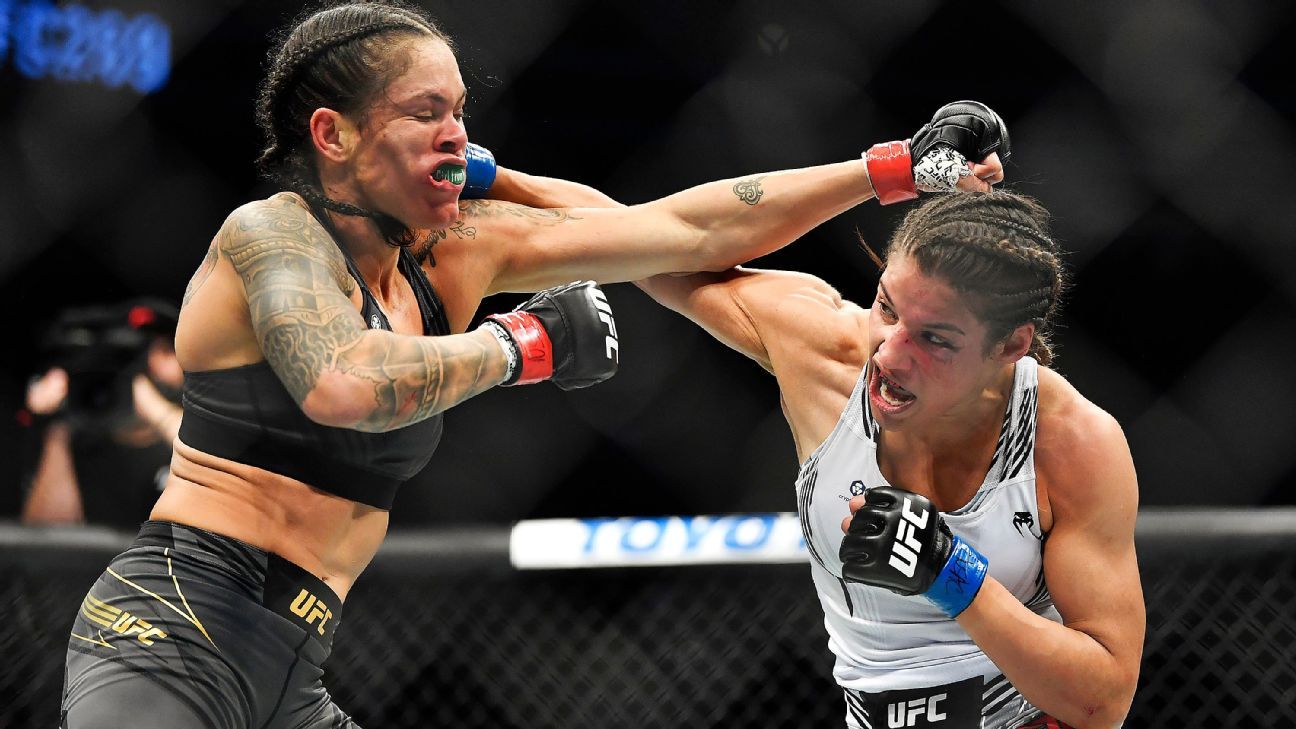 LAS VEGAS — Former UFC bantamweight champion Amanda Nunes revealed to ESPN on Monday she dealt with injuries to both of her knees during the buildup to her shocking submission loss to Julianna Peña at the end of last year.

Nunes (21-5) said she didn’t want to use the injuries as an excuse, and credited Peña for stunning her with a punch in the second round. However, the 33-year-old said she probably should have pulled out of the fight and likely would have had she not already been forced to pull out earlier in the year after contracting COVID-19.

“The whole camp for this fight, of course it was a mess,” Nunes told ESPN. “I always want to put in my head, ‘It’s OK. I can do this.’ [Fighters] are like that, we want to go through whatever to step in that cage. The first fight fell through after I got COVID, and then I went through a couple issues. I wasn’t able to show up to the gym every day at 100 percent, but I didn’t want to let that fight go again.”

Nunes, of Brazil, is scheduled to coach against Peña on the latest season of The Ultimate Fighter reality series, which began filming this week. The season will culminate in a rematch between Nunes and Peña (11-4). An official date for that fight has not yet been set.

Peña submitted Nunes in the second round of the first meeting, in one of the largest betting upsets in UFC history. Nunes, who trains out of south Florida, said her knees were so bad she couldn’t walk at times during her camp and her training was restricted as a result.

“I couldn’t do much jiu-jitsu, wrestling,” Nunes said. “I felt it in my warmup [on fight night]. My body and especially my arms. Everything in that camp was arms. I was only doing boxing. Everything I only did upper body. When I was warming up I was like, ‘That’s not how my body is.’ I’ve been in this game a long time. Five years with the belt, five years without. My body has never felt like that.”

Peña said she sympathized with Nunes’ claim, as she has also overcome injuries in her career — particularly a blown out knee in 2014 — but also questioned Nunes’ decision to remain in the fight.

“It’s a tough situation for me to hear that because I’ve torn both of my knees and have come back from two devastating knee injuries,” Peña said. “So, in one regard, I hear ya girl. I feel ya. I know 100 percent what you are feeling like. I have had time to reconstruct my knees and still compete at the highest level. So, my knees are not an excuse. You shouldn’t have shown up to fight if your knees are bad. Don’t fight. No one is making you do this. Fighters don’t like excuses, but I also agree that this is a legitimate excuse. But I also say, ‘Fix it, and let’s figure out a way to keep this party rolling.'”

The two bantamweights have been cordial and respectful to one another in the aftermath of the first fight and the early build to the rematch. Nunes, who hadn’t lost since 2014 prior to December, has congratulated Peña on the win, but vows to show the difference between them in the second fight.

“We all know I’m better than her, we all know I didn’t show up that night,” Nunes said. “Don’t get me wrong, I feel like Julianna is a great fighter but she’s not better than me. I’ve fought a lot of girls better than her in my best shape and still walked away with my belt. So, with Julianna, this rematch will be different.”

Jake Paul vs. Tommy Fury official for Feb. 26 in Saudi Arabia
‘I Regret Not Being This Monster I Am Again’
Demetrious Johnson Names What Separates Him From Other GOAT Contenders
Pereira Vs. Izzy 2, Masvidal Vs. Burns Headed To UFC 287
UFC Fight Roundup: Gerald Meerschaert vs. Joe Pyfer, Brian Kelleher vs. Journey Newson set for April events