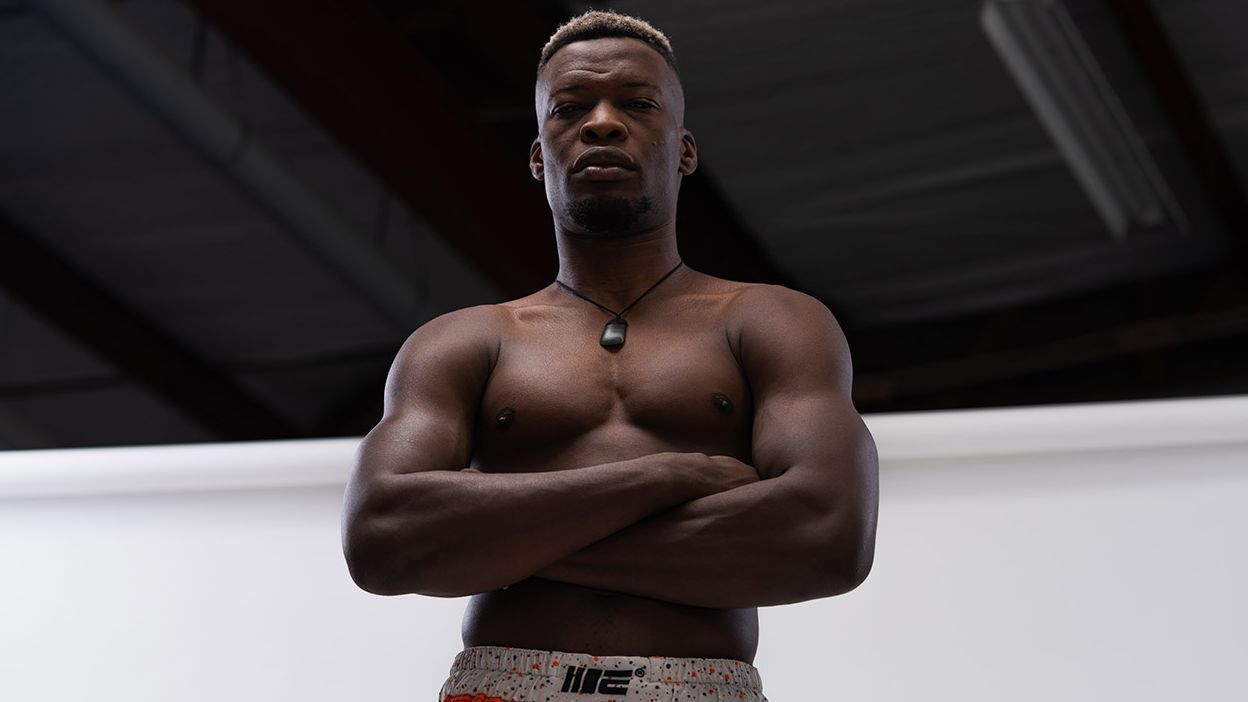 There are a number of bigger names competing at UFC 271 in Houston (Saturday, 10 p.m. ET on ESPN+ PPV), but no name is more intriguing than the one which will appear in the opening fight of the night.

While the MMA world waits in earnest for the rematch between Israel Adesanya and Robert Whittaker, the middleweight champion’s City Kickboxing (CKB) teammate and virtual “brother”, Mike Mathetha, will finally make his UFC debut.

But Mike Mathetha’s name won’t be announced by Bruce Buffer inside the arena. Instead, you’ll hear only Blood Diamond.

The words “Blood Diamond” carry with it a reference to a history of violence related to the diamond trade, but it has become more than just a nickname for Mathetha who has asked the UFC that he be referred to only in that way.

While understanding the genesis of the name seems like an obvious starting point, doing so won’t do the Zimbabwean-born New Zealander’s story justice.

“It was tough times at that point in Zimbabwe, and it was slowly getting worse,” Blood Diamond tells ESPN about his childhood. “But fortunately my dad was able to sense that and move his family to New Zealand before things got really bad.

“There were times when it was just scary to go to school. There were quite a few riots happening and they had to stop us from going to school,” he explains. “When I left the country I was glad it was over. I tried not to think about it too much, but at a young age it was scary. I guess that’s what makes you stronger.”

Leaving Zimbabwe provoked mixed emotions, most of all due to the tight bond with his grandparents who had played a significant role in his upbringing. Leaving them behind was tough, but he was left completely heartbroken just as dreams of a visit home began to really percolate.

“I grew up in Harare, but I was born in the second biggest city, Bulawayo,” he explains. “I grew up with my grandparents [as well], but I spent a lot of time in Harare. There was another area where my parents used to live, Hwange, and I used to always travel there on holidays.

“My grandma is still alive, but my grandpa passed away about a year before I planned to go and visit them. It was one of the most devastating times of my life, it comes back to that whole thing of you get given something but it can easily be taken away.

“I had started working, so I was so excited because I could finally make enough money to go and visit my grandparents. But a month into my job, I get that news that my grandad had passed away. It was sad.”

Adjustment to life in New Zealand had its challenges. But his love for all sports — he had played hockey, basketball, soccer and tennis back in Zimbabwe — provided at least one great opportunity to build new friendships, eventually seeing him try New Zealand’s national obsession: rugby.

“Everyone at school is talking about rugby, so I gave that a go,” he said. “I wasn’t the best, I was that guy who got the last five minutes of the game and if I’m lucky I would touch the ball. So I did that throughout all of high school, I wasn’t that good at it but it was a good way to make friends and some of them I am still good friends with today.”

His first foray into combat sports wasn’t borne out of the desire for friendship. It was, in fact, quite the opposite.

“I think it was because of the bullying that was happening in high school that drove me,” he says, noting how his past is similar to Adesanya’s. “When you’re a kid a lot of people are into martial arts because of the Jackie Chan or Bruce Lee movies and you’re like ‘I’d like to learn that’, but they didn’t have too many facilities in Blenheim, the first city I came to in New Zealand. And then when I moved to Auckland I thought I might not need to learn about martial arts because no-one’s going to bully me.

“But unfortunately, I still got bullied at university. I couldn’t live my life in fear so I thought let me try out a combat sport.”

Pushed on his own experiences with bullying, Blood Diamond’s tale is just another example of the scourge its existence remains on society.

“I felt like if I didn’t have my brother with me, if we didn’t go to the same college, it would have been really terrible for me,” he says. “Fortunately, we had each other’s back. It started off with people just teasing you and just picking on you, and sometimes some of the other kids who got picked on by the bigger kids would then take their frustrations out and pick on me. And I just never understood why.

“I guess just growing up, it made me want to stay away from people; I wouldn’t go to social events and if I was going to go out it would be with my brother with me, or a good friend. I would not go out of my way to socialize because I would get picked on, and I just didn’t want to deal with that.

“But it gets really bad when you get to university and you think that all this childishness is over, and then when you meet someone who still has that high school mentality and picks on you, that’s when I [thought] I can’t live my life in fear and I’ve got to make some changes.”

But there was also a silver lining in his deep personal pain: He found his calling.

“For a while I used to see City Kickboxing and one day I decided to walk in and train and see what it’s like,” he says. “I started off just learning the technique, but I was a bit big then, about 110 kilos, so I wanted to get in shape. I started doing that and [CKB coach] Eugene Bareman saw potential in me and he said ‘do you want to try and get a fight?’ and the rest is history.”

Bareman also saw the potential in Adesanya and many others who have made CKB one of the top gyms in the world. Blood Diamond shares a strong bond with the middleweight champion, much of which comes from their shared experiences fighting in China.

“I was just looking around and I’d never seen any other African fight and I was coming to support another African guy who was fighting in the main fight,” he explains. “And I just saw [Adesanya] hitting pads and I thought ‘okay cool, interesting’. And then he jumped into the ring and I was just like ‘wow, oh damn’. And from that fight I even stole some of his moves, I still even use some of them today.

“After that we came to the gym, and we just hit it off. When it comes to sparring, we’ve known each other for so long… and we help each other so much to be better fighters. For me, I have certain moves and he gets it, so he’s able to counter attack that and that forces us to get better and have new moves. It’s a very strong bond, me and Israel.”

Reflecting on that period, when he was solely focused on kickboxing, brings him great joy. He says he lost count of how many kickboxing fights he had, both in New Zealand and China, but is proud of his efforts before making the fulltime switch to MMA, where he has built a 3-0 record.

Inspired by Adesanya’s success and after bucket loads of sweat had been spilled on the CKB mats, at last the UFC contract finally came.

“I had no idea, the way he set up that whole conversation, I had no clue,” Diamond says of the video in which Bareman announced the welterweight was officially joining the UFC. “Like I said, [Adesanya] and I have had a similar journey, so as [Bareman] was talking and Is was standing next to him, I was like ‘okay, I know the story, there cannot be anything that will surprise.

“So Eugene was talking and I was just getting ready for the next sparring session [with Adesanya] and I was just thinking I’m going to get you after this. But then as soon as it happened, I didn’t know what to say, I was like ‘damn, that’s me, that’s cool’. But at the same time my mind was still thinking we’ve still got sparring to do … but it was special. I will always treasure that.”

On Saturday he’ll take that next step in his career when he faces Jeremiah Wells (9-2). When Bruce Buffer typically introduces a fighter, he will drop the nickname between the individual’s first and last name. But Blood Diamond has asked the UFC to be known as exactly that, not Mike “Blood Diamond” Mathetha.

“My whole career I’ve been called Blood Diamond,” he said. “It’s so crazy, before my first international fight my coach was like ‘by the way, what’s your name again’, because it’s just been Blood Diamond and I was like ‘you know what, let’s just keep it that way’.

“So I’m going to ride that train as long as I can; it’s something special to me, that is my name. If someone has a problem with it, they have to deal with it. There’s no crazy story to it. It was in the way I started fighting. Staying strong, being as hard as a diamond. And my fights, they’re bloody fights…. I’m as hard as diamonds and I’ll leave you a bloody mess.”

Hitting the same heights as his great mate and fellow Africa-born Kiwi Adesanya is going to take some doing. Still, Diamond is proud to be representing both Zimbabwe and New Zealand, and he plans to carry both flags when his hand is hopefully raised in victory in Houston.

Who knows, the welterweight title may lie in his destiny, though Nigeria’s Kamaru Usman is ESPN’s No. 1 pound for pound fighter for a reason. Usurping Leonardo DiCaprio may in fact be an easier assignment.

“It is to leave a legacy, that is my goal,” he says. “When it’s all said and done I want people to be like ‘Blood Diamond, he’s the truth’.

“Another goal of mine, this is one of the biggest goals I have, is that next time you Google “Blood Diamond”, I’m going to be the first person to show up before the movie.”