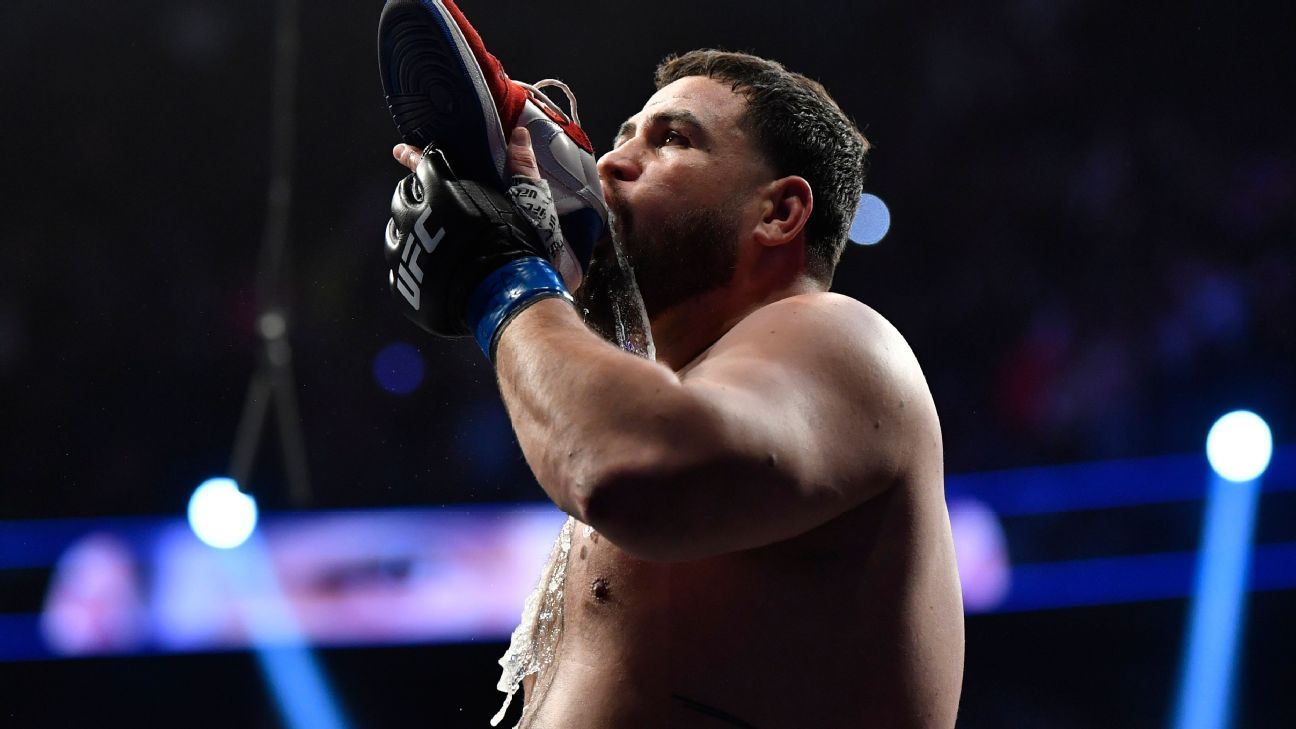 There aren’t too many more outrageous characters in the UFC than Tai Tuivasa. In a sport that has its fair share of the unusual, extreme, exciting and often downright jaw-dropping, Tuivasa has carved out a profile as one of the most popular athletes in the UFC.

At the heart of it, of course, has been the “shoey”, the reasonably uncouth celebration where Tuivasa chugs a beer from a shoe, which are both thrown to him from members of the crowd.

You can put a lot of it down to Australian larrikinism. But for Tuivasa it has become something bigger, it has, in fact, grown a life of its own.

“It’s just something you do when you’re partying with all your mates,” he explained to ESPN, ahead of his fight with Derrick Lewis at UFC 271 (Sat. 10 p.m. ET on ESPN+ PPV). “Honestly, I didn’t think it was going to be anything. And it’s not like it is, it’s not like I created it or was the first ever to do it; there’s been the Mad Hueys, Dan Ricciardo … all Aussies know what it is. But it was just something that me and my mates would do on a bender. Some of the things my mates would do, you probably wouldn’t put that on television.

“I was just thinking what’s the fastest way to get [alcohol] into me after the fight, so I thought I’ll just start doing shoeys when I walk out. And it has stuck. It’s become my thing now.”

Tuivasa’s most recent effort on the UFC stage was a thing of beauty. Having knocked Augusto Sakai out cold with a flurry of punches, the 28-year-old leapt up onto the top of the Octagon, caught a shoe in one hand, a beer in the other, and then whipped the crowd into a frenzy.

The crowd in Las Vegas didn’t have to wait long to get their wish, as Tuivasa engulfed the frothy refreshment from the reasonably clean shoe.

“[Social media star] Stevewilldoit, he’s one of the Nelk Boys, we’ve kind of got it down pat, he’s usually in the front-row or around there, and it’s kind of become a bit of thing,” Tuivasa said of his 271 celebration. He’s always got the can, too, in the crowd they have the cups [of beer] … but it’s not really planned, it’s more just an on-the-go thing. But it’s working out well, it’s been awesome.”

Not that they always go to plan. At UFC 264, a fan offered up Tuivasa another shoey — which included hot sauce.

“That wasn’t pleasant, that’s for sure,” he said. “I probably wouldn’t do that one again. But he got me. He was in the moment. I didn’t see him at the start, I only saw him at the end. But when I saw the rest of it, he’d bloody put the whole [bottle] in there. It was disgusting. I probably wouldn’t recommend the old hot sauce shoey.

“Yuck, it wasn’t good… I can drink some foul things, but I can’t drink that.”

Tuivasa’s career resurgence continues on Saturday, a far cry from his lows in 2019, when his once promising career looked like it might be heading for the scrapheap. After headlining an event in Adelaide, in his native Australia, and losing to former heavyweight champion Junior Dos Santos, Tuivasa suffered a further two defeats, prompting suggestions a further loss would spell the end of his UFC stint.

But he then flipped the script to rattle off four straight wins — including a hugely popular win over heavyweight villain Greg Hardy — to steadily rise back to the edge of the division’s top 10. Those wins, and probably more so the shoey celebration that have followed them, have seen Tuivasa’s profile soar. And that, in turn, has provided him with the platform to push another cause.

Tattooed on the inside of his bottom lip are the letters “FTA”, the acronym for “From The Area”. After his most recent win over Sakai, Tuivasa peeled the front of his lip down so the cameras could clearly see “FTA”.

“The Area” is Western Sydney, a region of the sparkling harbor city that has long been pilloried for its low socio-economic status and supposed lack of endearing features. Tuivasa is on a mission to change that reputation, or at least prove to the region’s youth that opportunities do exist if you’re prepared to work for them.

“Growing up we were taught that if you didn’t become a footballer you really didn’t have a shot. You ended up in jail or as a criminal. And that’s fine as well, but I wanted to make it so that these kids are proud of where we’re from. And be loud about it, and not be ashamed because we don’t have flash houses or we don’t have flash things. The talent is there, but you’ve got to work hard and be proud about it. I think being loud about it, especially for kids who need that hope, is huge. And now look at us, everyone wants to be from Western Sydney. We’ve got the best rappers, we’ve got the best fighters…and that’s nothing new, I’ve known this forever.

“I’m a houso (low income housing estate) kid, and looking up to criminals and things like this, that’s far too normal for people where we’re from. And I was the same, I idolized them and thought that’s what I want to be as well. I’m trying to give them another crack at things. I didn’t become a scientist, I still knock people out, it’s what I do and it’s what I did back then. But I changed my mentality, I changed my ways, there’s so many talented kids from Western Sydney in anything, but maybe they’re a bit too shy to have a crack at it. I’m just trying to be loud and proud about it. I’m not any more special than anyone else.”

So, does he see himself as a role model, then?

“Well yes and no, I’m not perfect, I do a lot of s—ty things,” he says. “So I am role model, yes, but I’m also real. You just can’t sit there and talk about s—. If you want it, you have to go and get it. I’m not going to go and get it for you. That’s the thing about why I am proud about where I’m from. No-one ever gave us anything. Sometimes our parents never gave us anything.

“It’s about you and what you want, and you going to get it. And like I always said, I didn’t become a scientist; I was knocking people out on the street and I’m still knocking people out now. But the difference is now I get to travel the world and do beautiful things, I get to feed my family off the same thing I was doing back then.”

Given the eight fighters that separate them on the UFC rankings, a win over the No. 3 ranked Lewis would be the biggest moment of Tuivasa’s career to date. And he feels he is ready to take that next step up to the truly elite level of heavyweights, having previously trodden that same path he’s now preaching to the kids of Western Sydney.

“I’m still very young, but I’ve been in the UFC now for five years. And I kind of forget that myself, and I think the best of me is still yet to come.”

Hopefully the best shoeys are still to come, too.