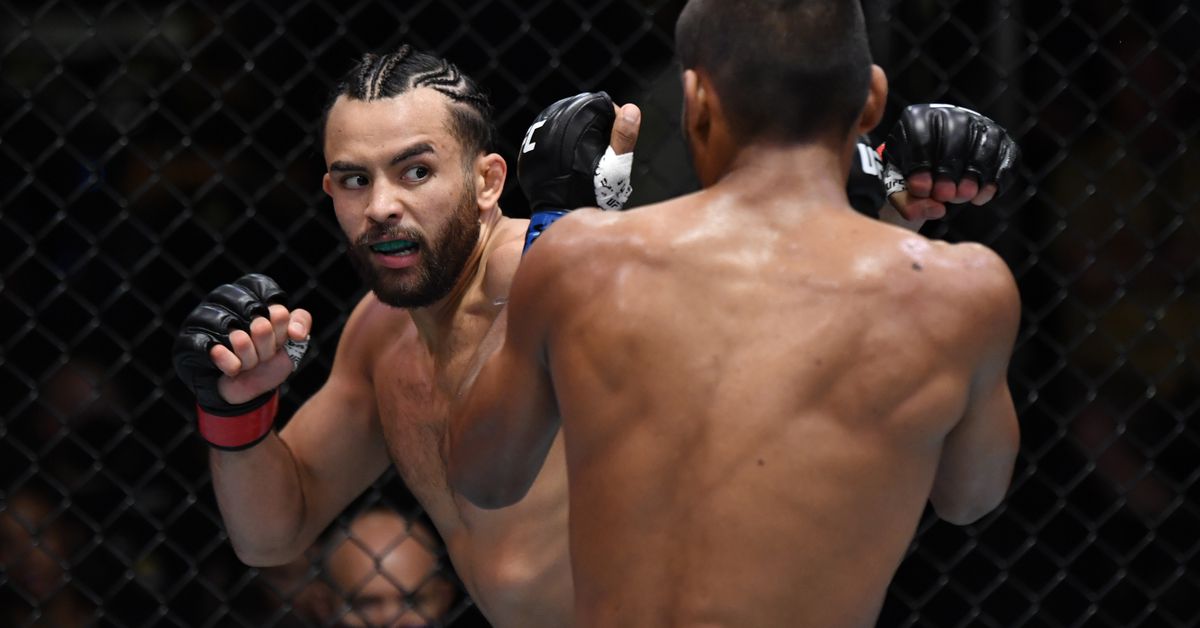 Phillips’ potential is quite clear. The 26-year-old talent has an explosive Karate style, and he pairs that stand up trickery with quality wrestling and Brazilian jiu-jitsu. He began his UFC career with an impressive three-fight win streak, but last time out, found himself a bit tired when Raulian Paiva simply refused to be put away. Rojo, alternatively, made his UFC debut last March on short notice, putting on a solid showing in a loss to Charles Jourdain. Several would-be opponents have fallen through since then, leading to this high-profile — but risky — sophomore match up.

Between the two, Rojo is definitely more of a specialist. Phillips is generally happy to mix it up, the type of athlete that will time a double leg even if winning the stand up exchanges just to remain a full threat. Against the more classic striker, a varied gameplan would be wise.

Four of Rojo’s seven losses come via submission. Phillips has been doing jiu-jitsu since his childhood and has competed quite a bit on the mats. Even if Phillips can handle Rojo on the feet, why wouldn’t he try to get out early with a nice strangle?

At the highest level, taking the path of least resistance becomes more and more important. Phillips’ chase for the knockout seemingly cost him big versus Paiva, and he shouldn’t repeat that mistake here.

Record: 16-7
Key Wins: Victor Huga Madrigal (Combate 45), Michael Erosa (Combate 18)
Key Losses: Charles Jourdain (UFC Vegas 21), John Castenada (Combate 35)
Keys to Victory: Argentina’s Rojo has a really fun style of Muay Thai. He’s one of those strikers who can do damage from all ranges with all weapons, chopping low kicks at distance and attacking with knees from the double-collar tie and everything in between.

In this bout, Rojo has to slow Phillips’ movement down. Phillips covers a lot of ground inside the Octagon. At first, it’s lateral distance, as he circles and changes directions frequently in the hopes of baiting his foe into a counter shot. If that doesn’t happen, he can explode forward very suddenly.

Rojo has to track his opponent down carefully, and ripping into the lead leg is perhaps his best path to evening up Phillips’ speed advantage. Fortunately, Phillips’ wide stance and lateral movement should provide ample opportunities for Rojo to kick low, provided Rojo gives him some punches to think about first.

In addition, pursuing the clinch might be a wise tactic. Rojo doesn’t want to wrestle with Phillips, but if he can back Phillips into the cage and engage in more of an upper body clinch battle, he’ll be able to slow his opponent down and land knees.

This may be a somewhat odd choice for a main card pay-per-view fight, but it’s a fun little Bantamweight scrap nevertheless.

For Phillips, it’s an opportunity to get back in the win column. He’s been pushed quickly, and given his youth and inexperience, overall done very well! Still, losing to Paiva was a setback, and this match up is a chance to make up for it, especially if he wins in dramatic fashion.

The stakes are quite a bit higher for Rojo, who’s several years older and more experienced. This is his first UFC fight on a full camp, and it’s pretty imperative he make a strong second impression. If he’s victorious, it’s far and away the biggest win of his career. If not, Rojo may find himself on the chopping block, as Bantamweight is simply loaded with talent.

At UFC 271, Kyler Phillips and Marcel Rojo will square off. Which man will earn the victory?

Remember that MMAmania.com will deliver LIVE round-by-round, blow-by-blow coverage of the entire UFC 271 fight card right here, starting with the early ESPN+ “Prelims” matches online, which are scheduled to begin at 6 p.m. ET, then the remaining undercard balance on ESPN/ESPN+ at 8 p.m. ET, before the PPV main card start time at 10 p.m. ET on ESPN+ PPV. Bet on UFC 271 at DraftKings Sportsbook.

To check out the latest and greatest UFC 271: “Adesanya vs. Whittaker 2” news and notes be sure to hit up our comprehensive event archive right here.