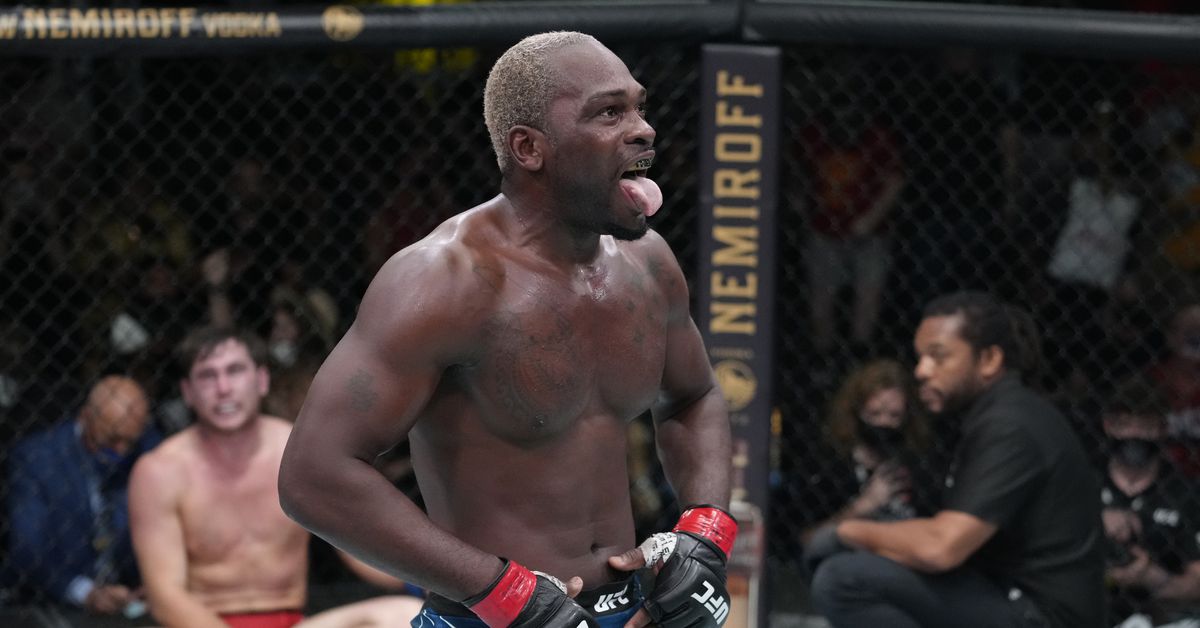 Derek Brunson has a vested interest in the outcome of UFC 271’s main event, but only as far as it concerns his own future.

As he seeks his sixth straight win in a showdown against Jared Cannonier on Saturday — on the same main card that’ll see Israel Adesanya and Robert Whittaker battle it out with the UFC middleweight title on the line — Brunson isn’t concerned about who emerges as champion, so long as the winner understands that Brunson is next in line.

After beating Darren Till in September, the 38-year-old Strikeforce veteran actually felt as if he could already be next up to fight for the title; however, delays in booking Adesanya vs. Whittaker 2 left Brunson in limbo. That’s why he ultimately decided to accept the fight with Cannonier, who was essentially the only other man standing in the race to be No. 1 contender.

Brunson was initially scheduled to face Cannonier in January, but then the UFC called soon after the matchup was booked with a specific request in mind.

“The UFC contacted me and said, ‘Hey, we’re going to switch the fight,’ so I was like, what’s the reason?” Brunson said. “They were like, ‘We need a backup for the title fight.’ OK, let’s do it.

“They didn’t specifically say [whether it’d be] me or Jared, but I would assume that I would be the top guy for the job. I’ve been training for five rounds from the beginning. If somebody falls out, I’m ready to step up.”

When the fight was shifted to UFC 271, Brunson wasn’t explicitly told that a win would earn him a title shot. That also played a part in accepting a bout with Cannonier, because Brunson is well aware that nothing is guaranteed until contracts are signed.

“There’s no certainty,” Brunson said. “It wasn’t said, ‘You’re going to get the next title shot.’ It kind of makes sense considering my streak and where I’m at in the division, and where other guys are at and who they fought last. But it’s thing where momentum [matters] and you’ve got to stay fighting.

“It was an opportunity to stay on the same card or be around the same timeline as the title fight, so it made perfect sense.”

For most of his career, both in the UFC and previously in Strikeforce, Brunson has always been considered a threat to the best fighters in the middleweight division, but also someone who constantly ends up on the outside looking in, in regards to title contention.

In many ways, Brunson was usually his own worst enemy.

Take, for instance, his previous five-fight win streak he put together in the UFC from 2014-16. Brunson felt nearly unstoppable after demolishing four of those opponents by knockout. During that run, he largely abandoned his wrestling, which had always arguably been his strongest weapon after he was a three-time NCAA Division II All-American in college.

When he sought a sixth consecutive win and fifth straight knockout, Brunson came out swinging sledgehammers in a fight with Whittaker, except this time he was facing someone who was able to match him punch for punch. While he did manage to sting Whittaker during an early exchange, “The Reaper” lived up to his nickname by delivering a blistering combination that ended Brunson’s night with a violent first-round KO.

That began a 2-4 run for Brunson — the worst stretch of his career — but he was able to turn things around after realizing that he needed to make some necessary changes if he was ever going to get back to the top of the middleweight division.

Brunson stopped holding his training camps at home in North Carolina and instead turned himself over to the coaches at Sanford MMA in Florida. He also started focusing more on his grappling skills, a transition which has helped him move into the top 10 for takedowns, control time, and top position in UFC middleweight history.

“Everybody knew my capabilities,” Brunson said. “I think they’ve seen me not having it together at certain times, just going in there and rushing fights. And lately here, I’ve been putting together solid fights and not rushing.

“People know what I bring to the table. If Derek’s focus and calculated, that’s going to be one of the toughest fights in the division. That’s the way I’m fighting right now.”

Brunson has also started to find satisfaction in a different way of winning, one that doesn’t always involve a highlight-reel finish.

Knockouts are nice, but Brunson has learned to love methodically mauling his opponents. For him, there’s a certain kind of satisfaction in those kinds of victories.

“That’s like the most gratifying and funnest way to fight,” Brunson said. “Just to go and break a guy down. Put them where they’re bad, get them tired, put them in bad spots and force their hand. Make them give up. Make them quit. Playing chess when it comes to MMA at the highest level, that’s what it is.

“I take a lot of joy in outsmarting these guys and breaking them, beating them up and taking their will. That’s pretty fun for me.”

While Brunson has never lacked confidence ahead of his fights, he has a different aura around him these days.

Perhaps that’s because Brunson is starting to convince even those who have always doubted him that a championship reign could potentially be in his future.

Khamzat Chimaev BLASTS Daniel Cormier for his CHOICE OF WORDS about relationship with Darren Till!
Sources: Holloway to return vs. Allen on April 15
Marlon Vera vs. Cory Sandhagen shifts to UFC on ESPN 43 in San Antonio
‘I Regret Not Being This Monster I Am Again’
After ‘s*** run in the UFC,’ Sabah Homasi relishes Bellator success ahead of Bellator 290