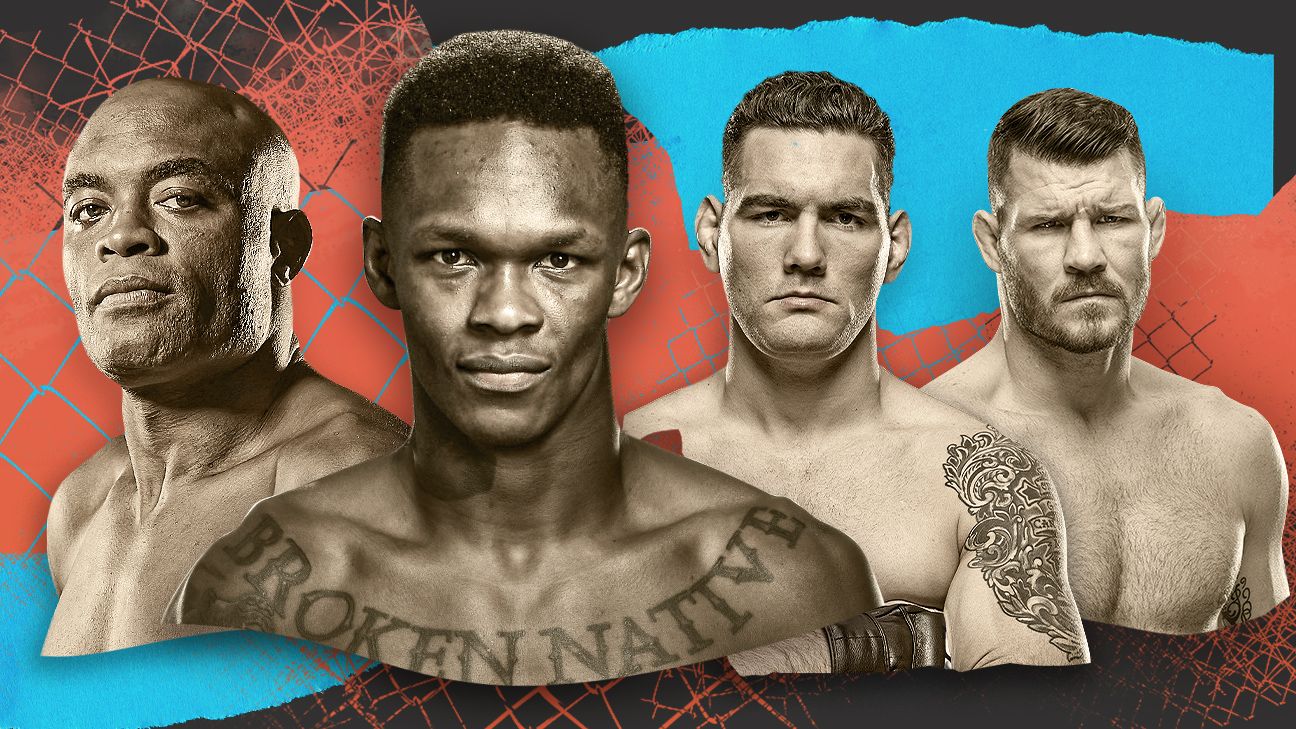 Anderson Silva stands alone among middleweights in the history of mixed martial arts. You can carve that into granite.

If one were to mimic the sculptural design of Mount Rushmore, the grand monument in South Dakota that honors four seminal U.S. presidents, the most honest encapsulation of 185-pound MMA greatness would be this:

But we can’t do that.

Although it’s indisputable that the proper placement of other middleweights would be on a mountainside miles away and at a much lower altitude, there are fighters who deserve to be recognized. The current UFC champion, Israel Adesanya, is the most notable among them.

Adesanya, who defends his title for the fourth time on Saturday against Robert Whittaker in the main event of UFC 271 in Houston (10 p.m. ET on ESPN+ PPV), has won 10 middleweight fights in a row. Silva owns the UFC record with 13 straight — and sets himself farther apart with 10 title defenses.

As for the other spots on the mountainside, there were many candidates, including four former UFC champions: Chris Weidman, Rich Franklin, Michael Bisping and Luke Rockhold. Also under consideration were former Pride champ Dan Henderson and current Bellator champ Gegard Mousasi.

Here are the four middleweights who earned their place and the notable moments that got them there.

Silva is not just the best middleweight fighter in mixed martial arts history; he was considered the greatest champion the UFC had ever known in his prime. Silva was a rare blend of artistic mastery and ruthless efficiency. He made MMA look like art, but he never let that get in the way of accumulating victory after victory.

Even if they don’t tell the whole story, Silva’s stats are impressive. Silva won 16 straight UFC fights between 2006 and 2012, a UFC record. His UFC middleweight title reign of 2,457 days — more than seven years — is the longest in history. Silva’s 10 consecutive UFC middleweight title defenses are the most ever in that division and the second most in any division behind Demetrious Johnson’s 11 at flyweight. At middleweight, Silva had the most finishes in the division’s history (11), the most finishes in title fights (9) and the most knockdowns among 185-pounders (13). (He had a UFC-best 18 knockdowns counting the ones from his four light heavyweight bouts.)

But Silva’s legacy is not of statistics, but moments. He came into the UFC in 2006 after fighting primarily in Japan and England as an unknown entity to many, only to smash the popular Chris Leben in his debut. Silva stopped Rich Franklin in under three minutes to become UFC middleweight champion in just his second fight in the promotion. Over the next half decade, Silva became the greatest fighter ever.

He knocked out Franklin in a rematch and choked out Dan Henderson soon after. He went up to light heavyweight and obliterated James Irvin and former UFC champ Forrest Griffin. In a performance that highlighted his heart and ingenuity, Silva rallied in a 2010 stoppage of Chael Sonnen via triangle submission with under two minutes remaining in a five-round fight where he lost the first four rounds handily. It’s still arguably the greatest comeback in UFC history, especially given the title stakes.

How did Silva top that? In his next title defense, he knocked out rival Vitor Belfort with a front kick to the face, an all-time iconic knockout in combat sports.

Silva dropped the title to Chris Weidman in 2013, and wasn’t the same after that. But during those seven years, Silva ran roughshod over the UFC with a flair all his own. He doesn’t just belong on the middleweight Mount Rushmore, he should be on the MMA’s all-time Mount Rushmore. — Marc Raimondi

When ranking the best middleweights in MMA history, it’s Anderson Silva up top, and then everyone else. Silva’s legacy easily stands above the rest in dominance, style and longevity.

That said, if anyone belongs in the conversation with Silva, it’s Adesanya. The 32-year-old current champ has established a divide between himself and the rest of today’s 185-pound division. He’s done so with dominant performances (Robert Whittaker, Paulo Costa) and fights that tested him and took him precariously close to defeat (Yoel Romero, Kelvin Gastelum).

One of the most admirable things about Adesanya’s résumé is his willingness to test himself. History probably won’t focus on his title defense against Romero in 2020, but those that follow the sport know that was one of his more impressive feats because he didn’t have to take that fight. No one likes fighting Romero. Adesanya specifically wanted to because, at the eventual end of his title reign, he wanted to be able to say he’d beaten Romero.

Adesanya took the proverbial torch from Silva when they fought in February 2019, and he’s carried it well since. Had he not moved up to light heavyweight and challenged a much bigger man in Jan Blachowicz in March 2021, we’d still be talking about his undefeated MMA record and his likely standing as the best pound-for-pound fighter in the world.

Weidman’s career has become a tale of two halves. It began with one of the greatest 12-fight winning streaks in the sport’s history and has since turned into a brutal 2-6 stretch marred by injuries and heartbreaking losses in competitive fights.

The first half of Weidman’s career earned him legendary status. The former collegiate wrestler signed with the UFC just two years into his professional career. He was touted as a phenom in 2011 when he submitted veterans Jesse Bongfeldt and Tom Lawlor. His reputation significantly grew the following year when he accepted a fight against Demian Maia on 10 days notice, somehow cut 32 pounds to make weight and then earned a split-decision victory. Later that year, in his first UFC main event against Mark Munoz, he delivered a Knockout of the Night performance with one of the more clever standing elbow strikes the sport has ever seen. 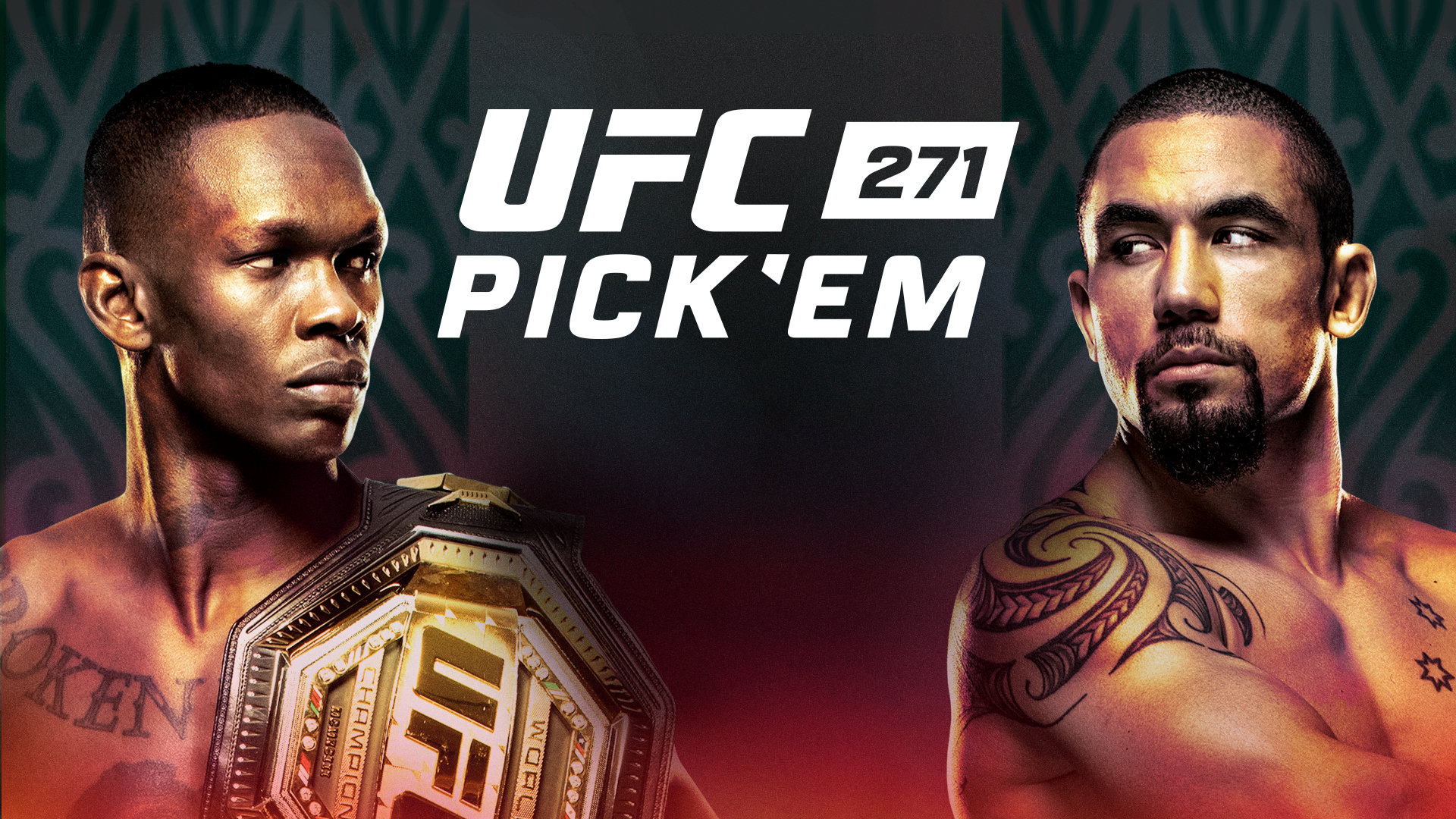 Weidman’s rapid rise through the division coincided with Anderson Silva running out of opponents due to years of dominance, resulting in Weidman getting a title shot before many thought he was ready. He had fewer than 10 fights of experience when he fought Silva in 2013. Weidman’s knockout victory is one of the most memorable highlights in MMA history. He followed it by beating Silva a second time later that year in a fight memorable for gruesome reasons after Silva broke his leg.

Weidman’s next two fights as the defending champion were equally impressive, as he solved the Lyoto Machida puzzle in 2014 and then dominated a feared knockout artist in Vitor Belfort in 2015.

It’s been a difficult road for Weidman since, as he’s suffered six defeats in his past eight matches, including:

Losing the title in a back-and-forth fight against Luke Rockhold in 2015, which he went into with a broken foot; losing via knockout to Yoel Romero in the third round of a very competitive bout; losing a controversial fight against Gegard Mousasi in a bout that saw blatant officiating errors; losing another matchup that was close the entire way, via another third-round knockout to Ronaldo Souza in 2018; and most recently, breaking his leg in an eerily similar way to Silva’s injury in the first 20 seconds of a contest against Uriah Hall.

Weidman says he has undergone 25 surgeries thus far in his career. However, the frustration and heartbreak of the latter part of his career haven’t diminished his earlier accomplishments. Weidman remains one of the sport’s most beloved and revered figures, and his impact on the timeline of the UFC middleweight division will always be felt. — Okamoto

Michael Bisping: From journeyman to champion

Dan Henderson knocked out Bisping brutally at UFC 100 in 2009. It was a middleweight title eliminator, and the loss shattered Bisping’s title hopes.

Three years later, Bisping was able to claw his way back into contention, earning a No. 1 contender fight with Chael Sonnen. While that fight was competitive, Sonnen defeated Bisping via unanimous decision to get a shot at Anderson Silva’s belt. Once again, the loss dashed Bisping’s hopes. About to turn 33 years old at the time, with six years in the UFC already under his belt, Bisping appeared to be at a dead end. His chances of ever getting close to another title shot seemed slim.

Bisping went 3-3 in his next six fights, with losses by brutal knockout versus Vitor Belfort and by embarrassing one-arm guillotine choke submission to Luke Rockhold. “The Count,” a British MMA pioneer, had reached full-on journeyman status. At 35 years old, Bisping was past his prime and his place in the sport had been set. Always a solid fighter, he could never win the big one.

Then it all changed.

After beating CB Dollaway and Thales Leites, he earned a huge fight against a legend. In February 2016, he stunned an aging Silva with a unanimous decision victory. Four months later, Rockhold, then the champion, was supposed to rematch another former champ, Weidman, at UFC 199. Weidman had to withdraw due to injury. The UFC called Bisping, who was filming a movie in Toronto at the time. On 17 days’ notice, Bisping accepted a title fight with Rockhold, a man who had utterly dominated him two years earlier.

In June 2016 at the Forum in Inglewood, California, just a few dozen miles from his adopted home in Orange County, Bisping shocked the MMA world by knocking out Rockhold in the first round to become UFC middleweight champion. After 10 years, Bisping became the first Brit to ever win a UFC title — and it came in his 26th UFC fight, which at the time was the longest journey ever to UFC gold.

Bisping’s story isn’t so much one of excellence as it is a tale of will and determination. He might not have beaten the top middleweights of his prime, but he outlasted them and won the title in his own way. Bisping was an Ultimate Fighter winner and a UFC champ. He’s tied for the fourth-most wins in promotion history (20), and in 2019 he was inducted into the UFC Hall of Fame. He was never a knockout artist like Silva or a well-rounded athlete like Rockhold. He wasn’t a superb wrestler like Dan Henderson or Sonnen. But Bisping never gave up, kept winning and left a legacy all his own. — Raimondi