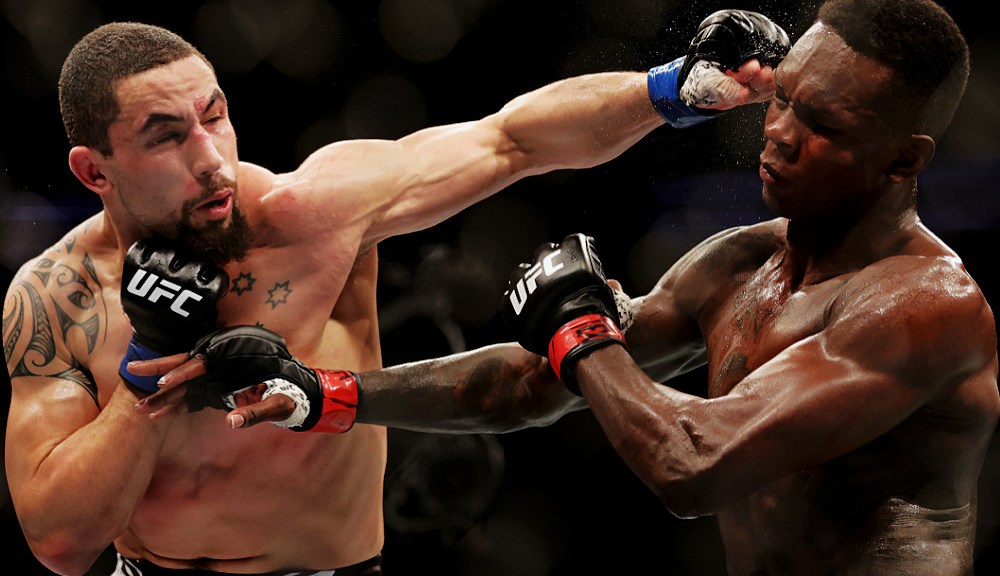 What mattered most at UFC 271 at the Toyota Center in Houston? Here are a few post-fight musings …

We can sit here all day and debate the minutiae of the scoring in Israel Adesanya’s title defense over Robert Whittaker in their rematch. I had it 48-47 for Adesanya, but am open to arguments for pretty much any other scorecard outside of a shutout.

At this stage, that debate doesn’t mean a whole lot, though. Adesanya (22-1 MMA, 11-1 UFC) got the unanimous decision nod from the judges, and now his rematch with Whittaker is in the past and he’s officially up 2-0 in the series between the world’s top two middleweights.

Was this Adesanya’s most exciting fight? No. But it had to be this way, for the most part. Whittaker is extremely skilled and dangerous, and if Adesanya thought he was going to walk right through him like he did in the first fight in October 2019, that would’ve been a tactical misstep. The pace slowed a tad as a result of Whittaker’s intelligent approach, but it still wasn’t enough to turn the tide in his favor.

Adesanya should be very pleased with how this unfolded. He’s now 22-0 in his career when fighting at 185 pounds. His only pro loss came to Jan Blachowicz at light heavyweight. It should serve as a scary realization for the rest of the contenders, because if Whittaker on a good night can’t get the job done, then I’m hard pressed to think anyone else has a great chance.

Does anyone truly think Jared Cannonier is the one? His knockout of Derek Brunson was absolutely devastating, and he’s got the pop in his hands to do that to anyone. However, Adesanya appears to flourish as the danger factor grows in his fights, so Cannonier (15-5 MMA, 8-5 UFC) is facing a major uphill climb in that future title matchup.

When Adesanya moved up to 205 pounds, some of his vulnerabilities were exposed. However, those vulnerabilities don’t exist in the same way against fighters in his wheelhouse. He’s quite literally the perfect middleweight from a size, style and skill standpoint, and it’s going to take an even better performance than what Whittaker offered to get that belt off him.

The above praise for Adesanya should not downgrade our view of Robert Whittaker in any way. It looked like it was going to be a really rough night for him when he got dropped in the first round, but he remained composed, made some stellar adjustments and got himself more and more into the fight as the rounds wore on.

I don’t agree with Adesanya’s post-fight comments about how a challenger can’t merely “do enough” to force a title to change hands. The whole idea that you need to “beat the champ to be the champ” with some sort of emphatic finish is silly. All fights, no matter the stakes, should be scored on the same unbiased criteria once the cage door closes – belt or no belt.

Even with that said, I didn’t think Whittaker (23-6 MMA, 14-4 UFC) won this one. He definitely had more moments of success in the rematch than the first meeting, but never had Adesanya in extreme danger over the course of 25 minutes. You could tell he gave it everything he had, and the fact he still fell short must be difficult to digest.

Whittaker said all the right things in the aftermath, though. He refuses to give up in his championship quest, and vowed to “stomp” every available contender until he leaves the UFC with no choice but to give him a third crack at Adesanya.

The parallels aren’t identical, but Whittaker has essentially become the Max Holloway of his division. He’s clearly the second best fighter at his weight outside the champion, and the one most capable of giving Adesanya a run for his money. He’s down 0-2 in head-to-head matchups, though, and no matter how you want to slice it, that’s a tough hole to dig out of.

Holloway showed the resiliency to fight his way back into a third meeting with the champion of his division, Alexander Volkanovski (though that got derailed by injury), and Whittaker has the traits to make the same thing happen for himself.

3. What does Tai Tuivasa’s KO mean?

Heavyweight is the most volatile of all UFC weight classes, and we had another perfect example of how quickly things can change when ranked fighters clash when Tai Tuivasa knocked out Derrick Lewis in a stunning and exhilarating manner.

We’re not trying to take anything away from Tuivasa (15-3 MMA, 8-3 UFC) here. He landed the shot that face-planted Lewis on the canvas. But it could’ve easily gone the other way, and almost did on a few occasions.

The post-fight narrative around this massive win for Tuivasa is that he is now an elite heavyweight contender who needs to be mentioned in the same conversations as Francis Ngannou, Jon Jones, Stipe Miocic and Ciryl Gane. However, I’m not quite convinced he’s ready.

Perhaps that’s not respecting the evolution of Tuivasa. He ended 2019 on a three-fight losing skid, but has since put together five consecutive wins – all by knockout – with the stoppage of Lewis being by far his biggest achievement.

As we’ve seen, though, there’s a bit of a gap between Lewis and the few men above him in the rankings. “The Black Beast” can knock out anyone on the right night, but just because he was the one caught this time around, shouldn’t lead to overzealous analysis of Tuivasa’s ceiling.

Tuivasa called his win a “passing of the torch” from Lewis, and that feels appropriate. The 28-year-old checks off a lot of the same boxes as Lewis from a fighting and personality perspective, and he is going to be a fan favorite until the day he walks away from the sport.

“Bam Bam” is in the thick of it now in the heavyweight division. The difficulty of the fight is going to take a sharp upward turn from here, and it’ll be interesting to see how he handles it.

4. Get Derrick Lewis out of Houston

It’s hard not to feel for Derrick Lewis in the wake of his loss to Tuivasa. It’s not so much that he lost, or that he was knocked out (though neither of those sound like fun). It was where it all happened.

Lewis (26-9 MMA, 17-7 UFC) got another hometown fight in Houston, and the support for him all week was unmatched. Lewis is synonymous with his city perhaps more so than any American fighter on the UFC roster, but I wouldn’t be shocked if he chose to never fight there again.

“The Black Beast” has fought three times on his home turf, and none of them have gone great. He skimmed past Ilir Latifi in a questionable split decision at UFC 247 in February 2020, had little to offer Ciryl Gane in an interim title fight at UFC 265 in August 2021, and now was knocked out by Tuivasa in brutal fashion in front of friends and family.

Lewis is not ignorant to the risks of this sport, and surely knew that with Tuivasa’s power, this could potentially happen. The loss is hardly an indictment on Lewis as a fighter, either, because at heavyweight, this could’ve gone his way just as easily. The energy from Lewis when he walks out to Toyota Center just feels off, though, and it might be in the best interest of future performances to compete elsewhere.

We already spoke on Cannonier above and how all signs point to him being next to challenge Adesanya for the middleweight title. It was very close to being a very different conversation, though, because Derek Brunson nearly had Cannonier dead-to-rights in the first round of their title eliminator.

Unfortunately for Brunson (23-8 MMA, 14-6 UFC), though, close is not good enough in this sport. He dropped Cannonier in the first round, then took his back for a rear-naked choke late in the frame before time expired – only to get viciously knocked out moments later in the second round.

The loss snapped Brunson’s five-fight winning streak, and essentially put a nail into the coffin of his hopes of ever fighting for a UFC title. That’s pretty sad, honestly, because Brunson has been a top talent for the better part of a decade in the UFC, and it’s a shame he doesn’t even have a championship fight to show for it.

Brunson is one of the last remaining active UFC fighters who came to the company through the purchase of Strikeforce. He’s gone through multiple reinventions over his octagon tenure, and it seemed “Blonde Brunson” was his best form. Until it wasn’t.

To the surprise of many, Brunson said prior to his fight with Cannonier that he only had two bouts left in his career. The goal was to get the win, secure a title shot, win the belt, then retire on top. All that got squashed, and it appears Brunson realizes he doesn’t have what it takes to pick himself up and make another run.

He does appear intent on following through with one more bout, though, and at 38, that feels like the right move. Hopefully his motivations are in the right place, however, because if he’s simply fighting for a final paycheck or to chase going out on a win, then that’s when it can get dicey.

6. Happy trails to ‘The Happy Warrior’

Roxanne Modafferi did not get the fairy tale moment she’d hoped for in her retirement fight, but it doesn’t dim the overall light of her career as she hangs up the gloves following a split decision defeat.

Modafferi (25-20 MMA, 4-8 UFC) made it known from the time her bout with undefeated Casey O’Neill (9-0 MMA, 4-0 UFC) was announced that it would be her MMA swan song. “The Happy Warrior” has fought 50 times in professional and exhibition bouts during a career that dates back to her November 2003 debut, and she is truly one of the pioneers on the women’s side of the sport.

There aren’t enough good things to say about Modafferi. Was she ever the most spectacular fighter? Far from it. She didn’t have any of the physical advantages many fighters enjoy, but she made a noteworthy career through hard work, dedication and evolution.

If anyone has told you in 2013, when Modafferi was on a six-fight losing skid, that she’d turn her career around to the point of fighting for a UFC title and keeping herself relevant for years in the women’s flyweight division, they probably wouldn’t believe you.

Modafferi overachieved in many ways inside the cage, and outside of it she is a warm spirit who is the perfect representative of the sport.