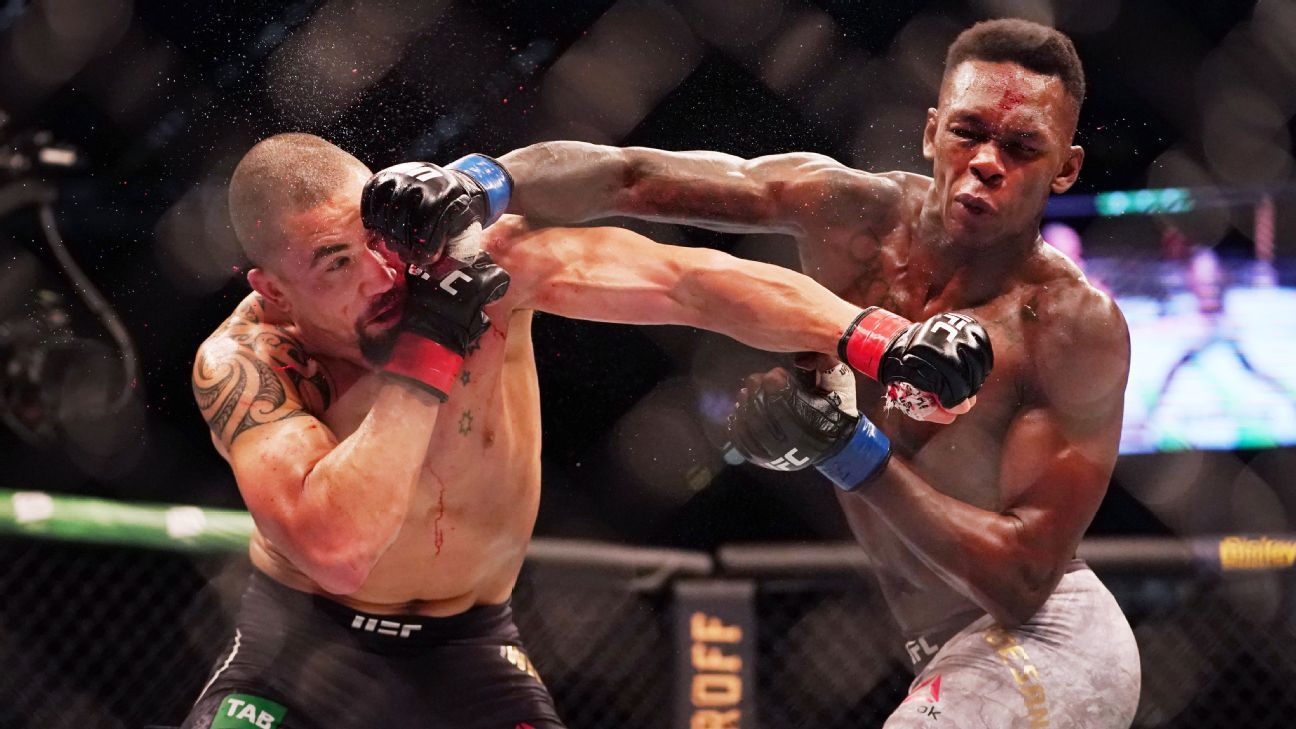 HOUSTON — Israel Adesanya wore a gold chain around his neck Thursday at the UFC 271 news conference. Hanging from the chain was a medallion with a digital screen showing an NFT video of Adesanya’s knockout of Robert Whittaker on a loop. A day earlier, Adesanya admitted he changed his hair to a higher fade, like the cut he had for that UFC 243 fight with Whittaker.

Whittaker (23-5) has won three straight since dropping the title bout to Adesanya, knocking off contenders Darren Till, Kelvin Gastelum and Jared Cannonier. The New Zealand-born Australian has won 12 of his past 13 fights overall. Whittaker, 31, held either the interim or undisputed UFC middleweight titles from 2017 to 2019. “The Reaper,” a former Ultimate Fighter winner, was the UFC’s first-ever Australian champion.

In the co-main event, Derrick Lewis takes on Tai Tuivasa in what should be an action heavyweight fight. Lewis (26-8, 1 NC), who calls Houston his adopted hometown, has won five of his past six and will try to redeem himself after a loss to Ciryl Gane at UFC 265 in August in Houston. Tuivasa (13-3), known for drinking beer out of a shoe after victories, has won four in a row, all by KO/TKO.

Also on the card, Cannonier will take on Derek Brunson in what could be a middleweight title eliminator, Bobby Green and Nasrat Haqparast meet in a lightweight bout and women’s MMA pioneer Roxanne Modafferi makes her final walk to the Octagon against the up-and-coming Casey O’Neill at flyweight.

Follow along as Brett Okamoto, Marc Raimondi and Jeff Wagenheim recap every fight or watch the card on ESPN+ PPV.

Lawrence was in total control, dominating Martinez for most of the fight’s three rounds. But with less two minutes left, Martinez dropped Lawrence with a spinning back fist. Then, he dropped Lawrence again with a punching combination.

Somehow, though, Lawrence was able to grab a hold of Martinez, land a takedown and stymie the comeback. Lawrence hung on for a unanimous decision (29-27, 29-27, 29-28) against the scrappy Martinez in a wild affair.

“I didn’t know where I was,” Lawrence said of that sequence. “I just did a couple of drills on what to do what I’m rocked.”

Lawrence dropped Martinez three times in the fight, twice in the second round. He also took Martinez down seemingly at will in what looked like, until the final few minutes, a masterclass of a performance. When asked in his postfight interview by Daniel Cormier who he wanted next, Lawrence was clearly disappointed about the endgame, even if he did pick up a victory.

“Right now, after what I just did, I’m pretty disappointed,” Lawrence said. “It’s a good question, but I just want to go up from here.”

Lawrence, 29, has won five straight, including his first two in the UFC. The Tennessee native has not lost since 2016. Martinez, a 25-year-old Houston native who had the crowd behind him, had a three-fight winning streak snapped.

Malkoun bounced back from a slow first round to secure a unanimous decision for his second victory in the UFC.

The Australian middleweight couldn’t wrestle Dobson to the ground in the opening frame, despite moving into a bodylock multiple times. He stayed with his grappling heavy strategy in the second and third rounds, however, and controlled Dobson on the floor for the majority of the fight. All three judges scored the bout 29-28 for Malkoun.

Dobson clearly got the better of any striking exchanges, but he simply couldn’t keep it there. He begins his UFC career with a loss, while Malkoun improves to 2-1.

Morozov, whose past success had come on the strength of his high-level wrestling, scored an early knockdown with a slick uppercut and seemed to fall in love with his hands. It cost him.

Silva de Andrade survived the knockdown and a nasty cut next to his right eye to make it to the end of the round. And with the fighters exchanging on their feet in Round 2, Silva de Andrade hurt his opponent with a punch and staggered him with a knee to the head. When the fight went to the mat again, this time Silva de Andrade was on top. He secured a rear-naked choke and got the finish at 3:34 of the round.

Silva de Andrade, a 36-year-old from Brazil, has won three of his past four fights. Morozov, who is 32 and from Kazakhstan, has lost two of his past three bouts after running off a winning streak of five straight.

Wells almost committed an all-time Octagon gaffe, slipping and nearly falling as he tried to charge in at the opening bell for an attack. Luckily for him, he didn’t just recover quickly. He got an early finish.

Wells beat Mathetha with a rear-naked choke submission at 4:38 of the first round, avoiding being part of the MMA blooper reel for the foreseeable future. Wells took Mathetha down pretty quickly after the initial slip, landed some ground and pound, took the back and then cinched in the choke.

“I ended up tripping, so I had to keep my composure and get back in here,” Wells said in his postfight interview.

Wells, 35, is 2-0 in the UFC, both victories coming by finish. The Philadelphia native has won four straight and is a former Cage Fury FC welterweight champion.

Mathetha, a 33-year-old accomplished kickboxer, is a teammate of UFC middleweight champion Adesanya at City Kickboxing in New Zealand. Adesanya, who fights in the UFC 271 main event, came to Toyota Center early Saturday to watch the fight.

Grishin managed to pick up his second UFC win in a very forgettable three-round decision over Knight. The bout got off to a poor start on Friday, when Knight missed weight by a UFC record 12 pounds for what was supposed to be a 205-pound contest. He forfeited 40% of his purse for the miss, but the fight continued at heavyweight.

Knight, who has been known during his UFC career for his knockout power, was very inactive throughout, and Grishin took advantage with unanimous 30-27 scores. Knight’s only good moments came behind his wrestling, as he did take Grishin down a couple of times. But the Russian quickly reversed position or worked his way back up. He hurt Knight with punches in the final moments of the fight.