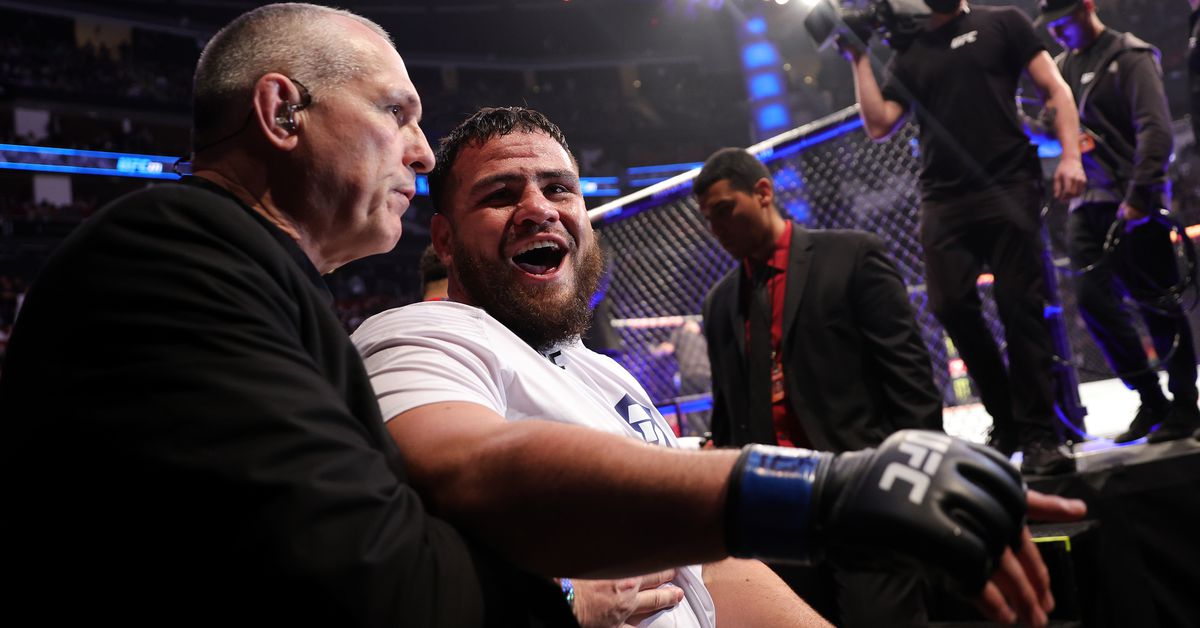 Winner: Israel Adesanya
Who He Should Face Next: Jared Cannonier

Adesanya earned his fourth straight title defense, and now “The Last Stylebender” is about to get the “fresh meat” he’s been asking for. That’s because a championship fight against Cannonier is on deck after “Killa Gorilla” handled business against Derek Brunson. Adesanya has always been a big fan of Cannonier’s and was anticipating a fight against him in the past. Now that they have each handled their business, they are on a collision course, perhaps in June, which is when Adesanya hopes to return to action.

Winner: Tai Tuivasa
Who He Should Face Next: Blaydes vs Daukaus winner

The Heavyweight division is a bit murky at the moment with Francis Ngannou’s hiatus and uncertain future with the promotion. Jon Jones is likely to make his debut at 265 pounds later this year, and an interim title fight against Stipe Miocic could be likely. As for Tuivasa, he could expect to move into the Top 10 (maybe the Top 5) following his huge knockout win over the former two-time title contender and UFC knockout king, Derrick Lewis, in the second round thanks to a perfectly-placed standing elbow. “Bam Bam” doesn’t care who he faces next … and he means it. In a perfect world, Tuivasa would face the winner of the upcoming 265-pound tilt between Curtis Blaydes (No. 4) and Chris Daukaus (No. 7), which will go down on March 26, 2022. If Tuivasa can take out either of those two gentleman, he could be staring down the barrel of a title shot sooner, rather than later.

Winner: Jared Cannonier
Who He Should Face Next: Israel Adesanya title shot

After picking up a huge knockout win over Derek Brunson (see it here), Cannonier undoubtedly secured his place at the front of the championship line. “Killa Gorilla” is 5-1 over his last six fights with his lone loss coming at the hands of former champion Robert Whittaker, good enough to catapult him to the No. 3 spot on the official UFC rankings. After his win, Cannonier made the most of his time on the mic to demand a title shot from Dana White, which he will get because UFC’s president confirmed he would be next during the post-fight presser. It’s been a long time coming for Cannonier, who will have the chance to stun the combat world by handing Adesanya his first loss as a 185-pound fighter.

Winner: Renato Moicano
Who He Should Face Next: Grant Dawson

Moicano picked up his second straight win and now three of four overall after defeating Alexander Hernandez via rear-naked choke. With a nice start to his 155-pound career in the Octagon, Moicano could be on his way to cracking the Top 15 if he can pick up another win or two. A fight against Dawson may catch some people off guard, but it’s a pretty good matchup. Dawson has come out of the gates swinging and winning, racking up five victories inside the octagon before fighting to a majority draw against Ricky Glenn in his next fight. Dawson doesn’t have a win against a seasoned UFC veteran like Moicano yet, so if he can take out the Brazilian bomber it could lead to bigger things moving forward. For Moicano, stopping Dawson’s momentum could be his ticket to getting those bigger paydays he was asking for post-fight.

Winner: Bobby Green
Who He Should Face Next: Brad Riddell

After two tough losses, Green has bounced back nicely with two straight wins. His latest came against Nasrat Haqparast, defeating him via unanimous decision after a dominant 15 minutes of striking excellence from “King.” Still trying to crack the Top 15, Green — who had the Houston crowd eating out of the palm of his hand — could get close if he can defeat someone like Riddell in his next outing. Riddell is coming off a tough loss to Rafael Fiziev, who was taken to deep waters by Green not too long ago. Prior to his loss to Fiziev, Riddell was riding a seven-fight win streak, including winning his first four fights inside the Octagon.