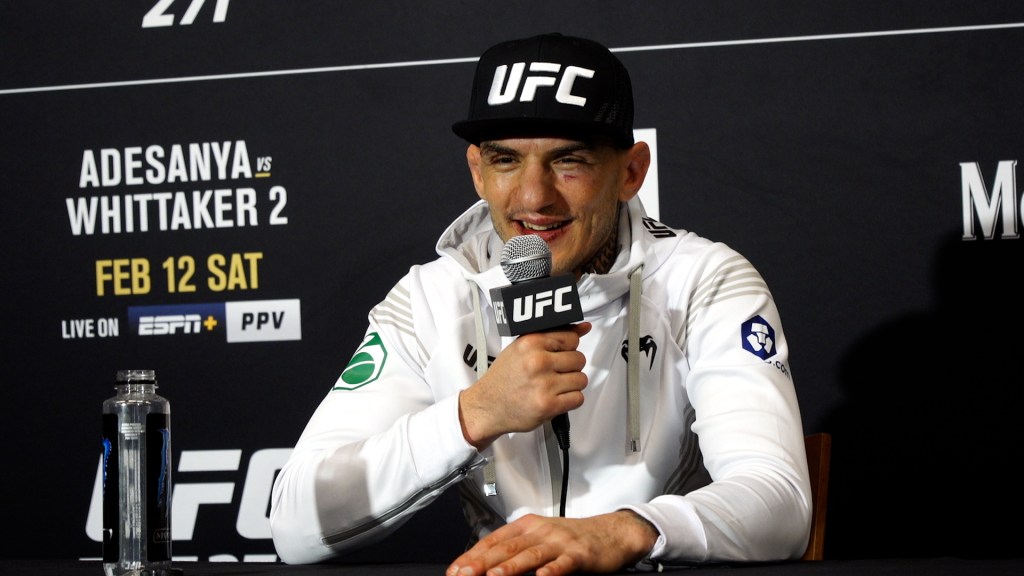 By Danny Segura and Ken Hathaway |

HOUSTON – Renato Moicano got his hand raised, but that’s still apparently not enough for the UFC lightweight contender.

The Brazilian fighter notched his 16th career win on the main card of Saturday’s UFC 271 pay-per-view event. Moicano (16-4-1 MMA, 8-4 UFC) submitted Alexander Hernandez with a rear-naked choke in the second-round.

Yet, despite getting the win and a stoppage, Moicano thinks his performance wasn’t 100 percent.

“My first round was good, but I took him down and I didn’t capitalize on that,” Moicano told reporters at the UFC 271 post-fight news conference. “I train for if I put the guy down, the fight is over. So congratulations to him for standing back up, but I think I need to watch the fight again to see what I did wrong.”

Moicano is now on a two-fight wining streak and 3-1 since moving up to 155 pounds. The 32-year-old knows he notched an important win in Houston, but still remains critical of his performance.

“I expected a good, explosive, well-rounded fighter,” Moicano said. “I know he has good wins. He knocked Beneil Dariush out and he fought really good guys, so I expected that. But I feel like I could do more and I’m better than that. I could finish him in the first round, so I have to watch the fight again and see what I did wrong and try to correct for the next one.”