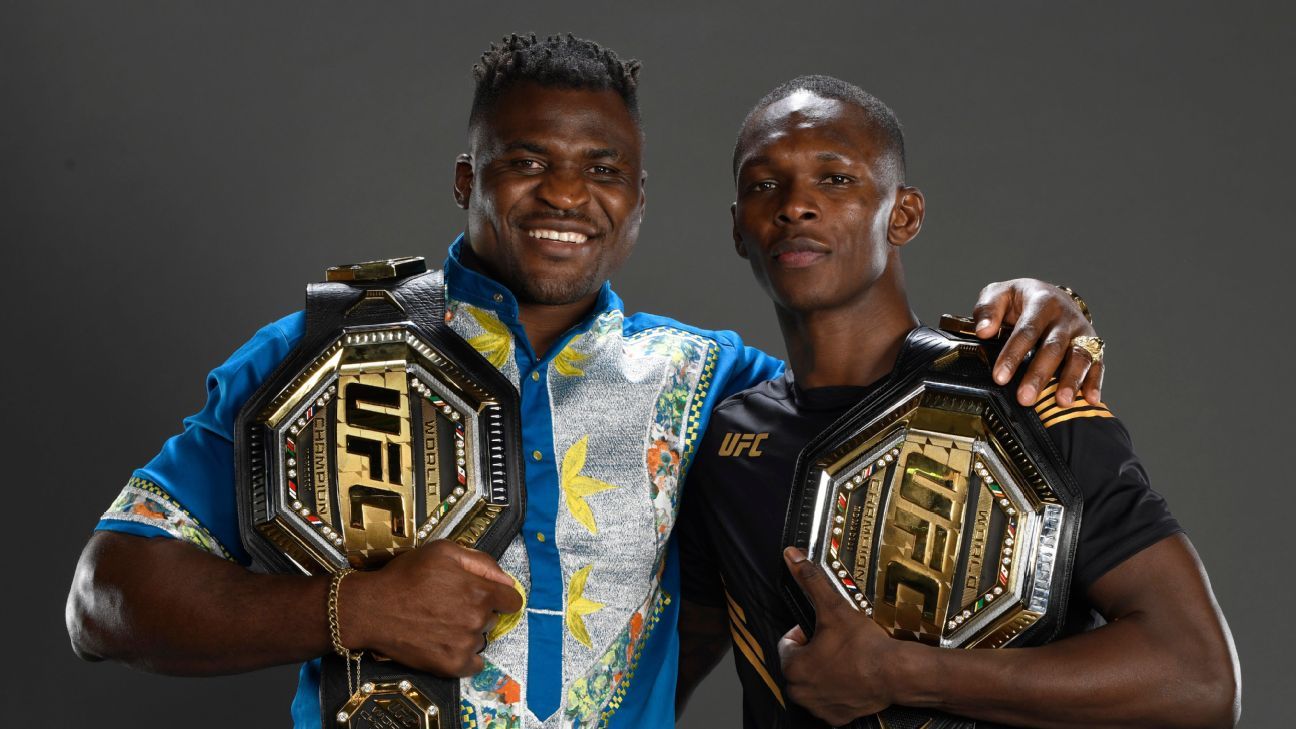 UFC 271 culminated with Israel Adesanya defending his middleweight title in convincing fashion with a second victory over Robert Whittaker. Rising stars Jared Cannonier and Tai Tuivasa both earned major victories in Houston as well, and set themselves up for major fights and potential title shots late this year.

Thus far, 2022 has seen two of the UFC’s top pound-for-pound fighters successfully defend their place atop their respective divisions. The next step is less clear for some of the UFC’s other top stars, as the fate of fighters like Conor McGregor and Nate Diaz continues to hang in the balance.

While there are many questions left lingering after Saturday, fighters, coaches and agents had a lot to say in Houston about several key topics moving forward, including what the future holds for UFC champions Francis Ngannou and Amanda Nunes, the ongoing issues and opportunities with compensation inside and outside the UFC, and how judging in MMA could be improved.

The ongoing drama with fighter pay in the UFC

Israel Adesanya was on the dais Wednesday at media day and gave an interesting answer about the new contract extension he signed earlier in the week with the UFC. After Adesanya spoke about how “crazy” the deal was and that it probably makes him the No. 2 highest-paid active fighter on the UFC roster, the promotion’s middleweight champion added that he believes the agreement will also help his peers.

“With everything that’s happening right now, this will trickle down to the rest of the fighters,” Adesanya said.

How much UFC fighters get paid has been a hot-button issue for many years. UFC heavyweight champion Francis Ngannou, a close friend of Adesanya’s, has been very vocal about his problems with compensation and the restrictions of a UFC contract as he eyes a potential move to boxing and the financial windfall that would come with it.

There’s someone else who has drummed up even more conversation about this topic: Jake Paul.

The YouTube star-turned-boxer has targeted the UFC, specifically promotion president Dana White, in his rhetoric about how fighters should be treated better. Paul released a music video about the UFC last month, telling White in the lyrics to “pay your fighters more.” A few days earlier, Paul announced he would be investing in UFC parent company Endeavor to try to help make change from the inside.

While there are plenty of doubts about Paul’s sincerity, there has been a lot of buzz in the MMA community about what Paul is saying, the attention it has received and if it could create real change.

“I think it’s brilliant,” a highly regarded MMA coach told ESPN. “And I didn’t want anything to do with Jake Paul, and I thought it was just like a big joke, and I never paid any attention to it. But oddly, he’s kind of picked up the cause. Funny enough, it’s having a lot of impact. If anything, it’s bringing a lot of attention to an issue that perhaps needs a little more attention from his platform.”

Will Paul’s rhetoric lead anywhere? Some inside the sport have doubts about that.

“The spotlight he is shining on MMA-related issues is only worth the tweets that promote it,” a prominent manager said. “Will not change anything. Not even a little.”

Last year in boxing, Paul knocked out UFC veteran and multiple-time MMA champion Ben Askren in April. He went 2-0 against former UFC welterweight champion Tyron Woodley, including a one-punch knockout in the rematch. One coach of several UFC fighters pointed out the contradiction there.

“You’re gonna tell yourself you’re looking out for the fighters while you’re knocking out one of the guys over and over again to get paid,” a coach said. “You’re capitalizing on [Woodley’s] downfall, which is really what it is.”

One thing that could make Paul a real force for change, though, is that he’s not in any way “beholden” to the UFC, one manager said.

“Isn’t that crazy?” another high-profile manager said. “But [Paul is] the one who’s got nothing to lose. Maybe that’s the person you need, a person that’s not gonna get blackballed and get everything taken from him. It’s a crazy industry. Maybe that’s the one — a guy who’s financially set and doesn’t give a f—.”

What should Francis Ngannou do next?

Dana White acknowledges he didn’t put the belt on Francis Ngannou at UFC 270 but says no disrespect was meant by it.

At UFC 270, Ngannou unified the UFC heavyweight title by beating his former teammate Ciryl Gane via unanimous decision. His future after that victory is very much in question.

Light heavyweights Johnny Walker and Jamahal Hill look for a signature win to kickstart their hopes of a push towards the upper echelons of the division.

Ngannou had no more fights left on his most recently signed UFC contract, but he was automatically extended another three fights or one year due to the promotion’s champions clause. Ngannou’s team believes he will become a free agent in January 2023. On top of that, Ngannou also needs knee surgery stemming from an injury he suffered going into the Gane fight that will keep him out for at least nine months.

Ngannou has expressed interest in pursuing boxing — which has been his lifelong dream — and he has bantered back and forth on Twitter with boxing heavyweight champ Tyson Fury. Ngannou seems to want to be able to box and compete in the UFC simultaneously, which would be an unprecedented kind of contract. Either way, those in the MMA community believe the Cameroon native is about to get paid big-time.

“I believe Francis Ngannou is going to set the market for what a person not named Conor [McGregor] or Khabib [Nurmagomedov] can be and make in the UFC,” a future Hall of Fame UFC fighter said. “Maybe those numbers don’t match up to what he would make in boxing, but if he does leave to go boxing, is it a one-time thing where he makes that massive amount of money?”

Fury will make more than $32 million for his next fight against Dillian Whyte, who will take home an estimated $8 million. Even the latter total would be more than Ngannou, and most MMA fighters for that matter, have ever made for one fight. If Ngannou has a chance to make exponentially more in boxing, one MMA coach said he should “f—ing go do it.” However, several in the MMA community have been put off by the very public negotiations — and gripes — made by Ngannou’s team against the UFC over the past few months.

“If you work for Dr. Pepper and you piss on Dr. Pepper, saying how bad the company is or you’re not happy with your pay at Dr. Pepper, they’re not going to come out and make a press release and say, ‘Hey, he’s totally right … now we’re going to reward you and pay you exactly what you wanted,'” one manager said.

How can judging be fixed in MMA?

Sean Strickland won a split decision over Jack Hermansson in the main event of UFC Fight Night on Feb. 5 in Las Vegas. Many felt it was a clear win for Strickland and were stunned that one judge, Sal D’Amato, scored three rounds out of five for Hermansson.

Strickland’s coach, Eric Nicksick of Xtreme Couture, tweeted following the bout that D’Amato should be fired for that score and other errors he has made. Association of Boxing Commissions and Combative Sports (ABC) president Mike Mazzulli told ESPN that it’s essential to look at D’Amato’s entire body of work over a decade before giving such hasty takes.

Monday through Friday, host Pablo Torre brings you an inside look at the most interesting stories at ESPN, as told by the top reporters and insiders on the planet. Listen

On Saturday night, Texas judge Rob Alexander came under fire for giving Roxanne Modafferi a win on his card when her opponent, Casey O’Neill, landed the most strikes in a single fight in UFC women’s flyweight history. In a fight O’Neill dominated, a split decision felt off-putting to many.

Judging is a constant cause of consternation for fighters, coaches and managers in the MMA community. Last week, several insiders suggested things like expanding the number of judges from three to five at cageside, shutting the judges in a soundproof booth to shut out crowd and corner noise, and forming a committee to certify judges nationally.

One of the popular views on scoring is that judges should be either retired fighters or constantly training and being up on the new techniques in what is very much an evolving sport. But nearly everyone agrees that changes need to be made in how MMA fights are judged and who is doing the judging.

One manager compared it to an umpire’s strike zone in baseball. If judging is going to shift every fight card, at least be transparent about how it shifts.

“Are we weighing the wrestling more today?” the manager said. “If his butt hits the floor, it’s one point? Where is the weight of the scoring going to? That’s what I want to know consistently.”

Amanda Nunes says she wants to open a private gym to help train MMA athletes in the future.

UFC women’s featherweight champion Nunes, the best female MMA fighter of all time, said last week she would be leaving American Top Team (ATT) and training in her own facility moving forward with a new group of coaches. The surprising news comes weeks after Nunes dropped the UFC women’s bantamweight title to Julianna Peña at UFC 269 in December.

While many last week in Houston said they didn’t know the details of what happened between Nunes and ATT, some said the timing was a red flag.

“The optics look bad,” one manager said. “You lose one time and you’re making a change.”

Nunes will be coaching opposite Peña on this season’s The Ultimate Fighter reality series. After the show, Peña will defend her title against Nunes in a rematch on a date to be determined.

“I guess we’ll know by her performance if it was a good or bad decision,” one coach said.