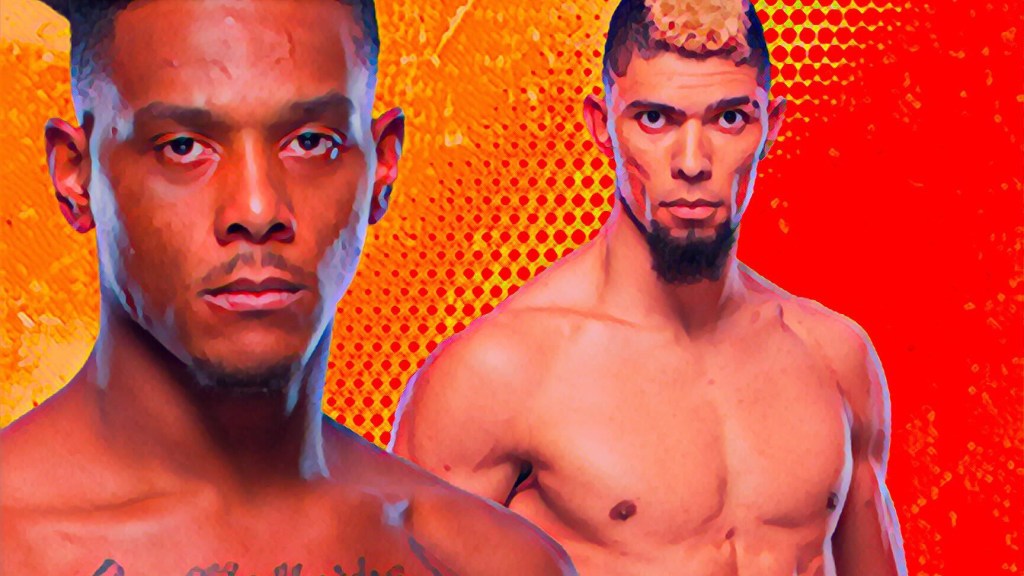 This weekend’s UFC Fight Night 201 took a major hit, with a planned main event between Rafael dos Anjos and Rafael Fiziev pushed back to next month’s UFC 271.

In their place, a pair of dangerous light heavyweights now take the headlining slot, with Johnny Walker and Jamahal Hill agreeing to extend their meeting to five rounds.

In a talent-rich weight class, both Walker and Hill are looking to prove they belong among the division’s elite, and a big win in a featured slot could go a long way toward making that statement. But that’s not the only storyline to follow at Saturday’s event.

It wasn’t that long ago that Johnny Walker (18-6 MMA, 4-3 UFC) seemed destined for an eventual showdown with long-reigning UFC champ Jon Jones. After all, the 6-foot-5 Brazilian exploded onto the scene with three straight Performance of the Night victories that totaled less than three minutes of octagon time.

However, in recent times, Walker has been mired in a bit of a slump, going just 1-3 in his past four appearances and dealing with some injuries along the way. Walker insists he’s better both mentally and physically now and is ready to regain the form that briefly made him the darling of the division.

Meanwhile, Jamahal Hill (9-1 MMA, 3-1 UFC) was showered with ample praise, as well, as he stormed into the UFC’s light heavyweight division with three straight wins (though one was later overturned after he tested positive for marijuana). “Sweet Dreams” so his hype train derailed a bit with a June loss to Paul Craig, though he rebounded in emphatic fashion six months later with a 48-second stoppage of Jimmy Crute.

Hill heard the doubters following his loss and seems to have a bit of a chip on his shoulder now as he looks to continue his winning ways and earn matchups with the fighters sitting at the top of the division.

So which prospect can deliver under the bright lights and take a major step forward in the division. We’ll find out on Saturday night, and with both fighters showing a penchant for quick finishes, it might not take long to determine.

Kyle Daukaus (10-2 MMA, 1-2 UFC) is currently mired in one of the most bizarre stretches of circumstances you can imagine.

After suffering a disappointing decision loss to Phil Hawes this past May, Daukaus bounced back with a spectacular submission win over Kevin Holland that was quickly ruled a no contest when replays showed that a clash of heads preceded the finishing sequence. The two were set to run it back one month later, but an injury forced Holland out of the bout. Replacement opponent Roman Dolidze was also forced to withdraw, and Daukaus was removed from the card.

The 28-year-old middleweight was then booked to face Julian Marquez at Saturday’s event, but “The Cuban Missile Crisis” became the third straight opponent to withdraw from a bout with Daukaus. Undaunted, Daukaus continued to prepare and was willing to face anyone the UFC could find.

Stepping up on short notice for a bout that now will be contested at 195 pounds, Pickett has not had an easy path in the UFC. It actually took “The Night Wolf” three trips to Dana White’s Contender Series to finally earn an invitation to the promotion. From there, it was two straight losses to start his octagon run.

But Pickett has since earned back-to-back decision wins and believes he’s finally comfortable in front of the cameras that accompany competing in the sport’s largest promotion.

While neither of these men will be calling for a title shot with a victory, it’s certainly going to be a big statement in terms of future potential and staying power after battling through times.

Future UFC Hall of Famer Jim Miller (33-16 MMA, 22-15 UFC) made his octagon debut all the way back in 2008, and he’s since made that walk to the cage more than anyone else in the history of the company. At 38, Miller knows the end is coming, though he hopes to last until he can make a final appearance at UFC 300, which would likely take place in the summer of 2024.

Meanwhile, Nikolas Motta (12-3 MMA, 0-0 UFC) is making his promotional debut 16 months after earning a contract on Dana White’s Contender Series and admits it’s a bit of an honor to be paired with a legend of the sport.

Motta is a hard-hitting Brazilian who has earned eight of his 13 career wins via knockout and spent much of his training camp for this contest at the legendary Nova Uniao in Rio de Janeiro. But the crafty Miller has more than six hours of experience in the cage and would seem nearly impossible to surprise.

Can Motta deal with that veteran savvy, or will Miller’s experience prove insurmountable for a promotional newcomer?

UFC matchmakers knew exactly what they were doing in placing the middleweight matchup of Abdul Razak Alhassan (11-4 MMA, 5-4 UFC) vs. Joaquin Buckley (13-4 MMA, 3-2 UFC) as the main-card opener for Saturday’s event.

Company execs always like to see action-packed contests to kick off the featured portion of the evening, and Alhassan and Buckley certainly seemed destined to deliver. Incredibly, all 11 of Alhassan’s career wins have come by knockout, while Buckley has finished 10 of his 13 career wins via strikes – an impressive 77 percent finishing rate.

Put simply, these two men are among the most dangerous athletes at 185 pounds, matching power in the hands and feet with relentless aggression. Pairing them together seems absolutely certain to produce a highlight-reel finish.

Once these two are in the cage, don’t blink.

5
Ending on a high note 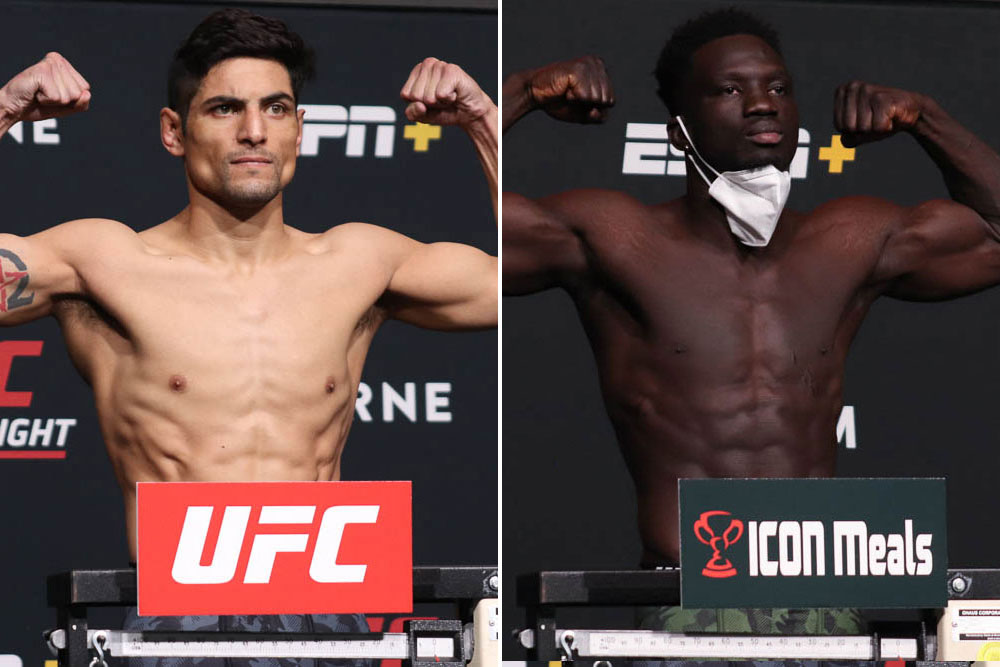 If you don’t have time to watch the full card on Saturday, make sure you at least jump in before the prelims have wrapped. The final bout before the main card features a potential featherweight banger between Gabriel Benitez (22-9 MMA, 6-5 UFC) and David Onama (8-1 MMA, 0-1 UFC).

Mexico’s Benitez suffered a TKO loss in his last outing this past July, but it was in absolutely thrilling fashion at UFC on ESPN 26 in a bout with Billy Quarantillo that was awarded the evening’s Fight of the Night bonus. Benitez has actually scored $50,000 awards in his past two consecutive fights after also earning a Performance of the Night bonus in his December 2020 win over Justin Jaynes.

Meanwhile, Uganda’s first UFC fighter, Onama, looks like he could be something special. Stepping in on short notice for his UFC debut, Onama went up a weight class this past October and battled to a decision loss with highly touted undefeated prospect Mason Jones. With Onama now dropping back down to his natural weight class and being given ample time to prepare, this could be a more honest evaluation of his future potential, which honestly looked quite high, even in defeat.

With Benitez always a willing dance partner, the prelims could close out in rather dramatic fashion.

After battling through a tough stretch of setbacks, including a pair of losses, a few major injuries, and some weight cut complications, Australian fan-favorite Jessica-Rose Clark (11-6 MMA, 4-2 UFC) now boasts a two-fight winning streak in the UFC’s women’s bantamweight division and is anxious to prove herself as a real contender in the division. She now faces Swiss judoka Stephanie Egger (6-2 MMA, 1-1 UFC), who is hoping to build on the strength of her first octagon win.
Veteran featherweight Chas Skelly (18-3 MMA, 7-3 UFC) is never one to shy away from an entertaining scrap, but he believes Saturday’s fight will likely be the last of his career at age 36. “The Scrapper” takes on Filipino import Mark Striegl (18-3 MMA, 0-1 UFC), who didn’t get to show much of himself in a debut loss 14 months ago against Said Nurmagomedov.
At just 24 years old, Christian Rodriguez (7-0 MMA, 0-0 UFC) brings a perfect record to the cage in his promotional debut. The Roufusport product boasts six finishes in his seven fights leading to a UFC deal, and is highly touted by those who train alongside him. He’ll look to make a memorable first impression when he takes on three-time UFC veteran Jonathan Pearce (11-4 MMA, 2-1 UFC).