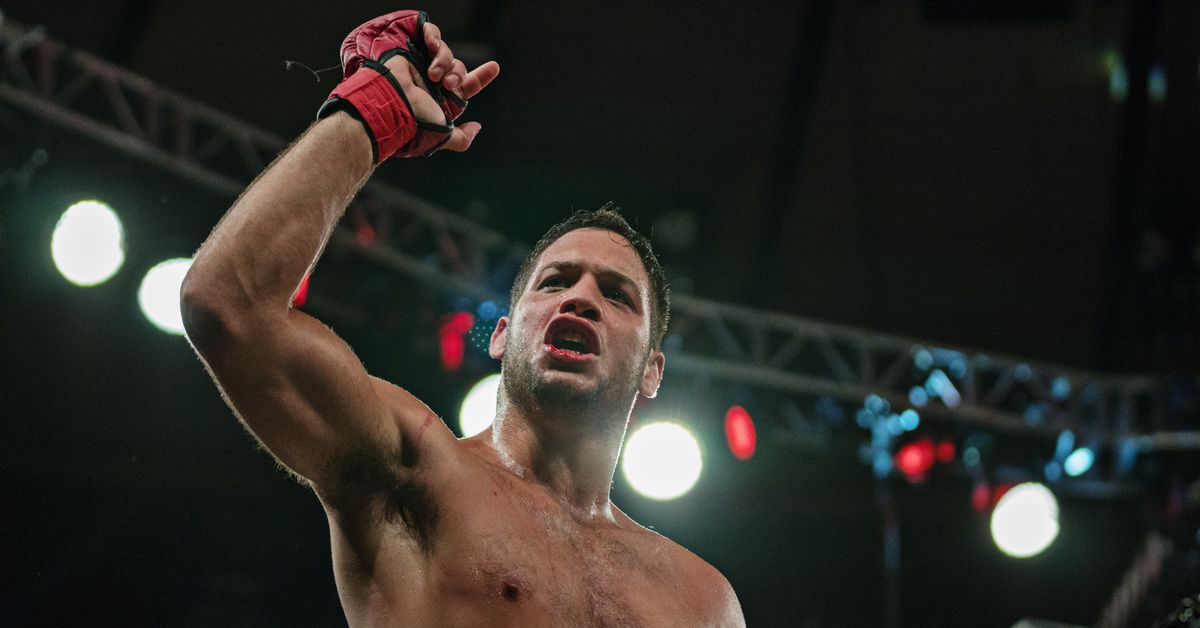 After a brief break, Bellator MMA will return to action this Saturday night (Feb. 19, 2022) to stage Bellator 274 from inside Mohegan Sun Arena in Uncasville, Conn. — which airs exclusively on Showtime — featuring a Welterweight fight between top contenders Neiman Gracie and Logan Storley.

MMAmania.com will deliver coverage of Bellator 274 on Showtime. To check out the latest Bellator MMA-related news and notes be sure to hit up our comprehensive news archive right here.

In the co-main event of the evening, former 170-pound champion Andrey Koreshkov returns to face off against Chance Recountre.

Gracie got back into the win column in a huge way in his previous bout by earning the first knockout of his MMA career after starching Mark Lemminger via strikes in the very first round at Bellator 266 (see it here). Now, the jiu-jitsu ace will look to build off that momentum against Storley, who also earned a huge win against Dante Schiro following his loss to current Welterweight champion, Yaroslov Amosov. In defeat, Storley proved that he belongs in the conversation of the upper echelon of fighters, taking Amosov the distance before losing a close split-decision. Other than that defeat, Storely has been perfect, amassing a nice 12-1 record overall, 7-1 inside the Bellator cage. Gracie (No. 4) obviously has the advantage on the ground but he has now given his future foes something to think about after his recent KO win. But going toe-toe toe against Storley (No. 5) isn’t exactly the best gameplan because “Storm” is one of the best-proven strikers in the division, racking up eight KO/TKO wins throughout his career. On that front, Gracie has yet to be finished in his combat career, and tomorrow night will not be the first. It will be a grueling five-round war that will come down to grappling, which will be highly-competitive since Storley is an accomplished wrestler. This one will be close to judge.

Koreshkov currently finds himself on the longest win streak of his career in five years with two straight wins after defeating Adriano Rodrigues and Sabah Homasi in back-to-back fights. The former 170-pound champion of the world made his return to the promotion in his previous fight at Bellator 264 after taking a fight outside of the promotion. Since losing the title to Douglas Lima, Koreshkov is 3-1 and currently ranked No. 9. A win over Recountree might not get him a shot at the title, but it’s definitely a step in the right direction. Recountre will be making his return to Bellator after a brief stint under the UFC banner that saw him go an even 2-2, as well as a small run on the regional circuit. In his first run with Bellator, Recountre went 2-1. Throughout his combat career, however, Recountre hasn’t nabbed that signature win against a big name, and taking out Koreshkov will give him just that. Once the dust settles, though, that staple win will once again evade Recountre because while he is building some momentum, Koreshkov is firing on all cylinders himself at the moment and is just a bit more well-rounded.

Though Piccolotti and Karakhanyan are both coming off losses, this is a sneaky good fight that has the potential to steal the show. Throughout his run with Bellator — and in his career overall — Karakhanyan has been battle-tested, taking on some of the best in the world including Lance Palmer, Pat Curran, A.J. McKee, Din Thomas, and Emmanuel Sanchez, just to name a few, so there really isn’t much Piccolotti can throw at him that he hasn’t seen before. That said, Piccolotti isn’t exactly a slouch and has had some tough battles against the likes of Benson Henderson and Sydney Outlaw, whom he lost to in his previous bout via split-decision. So far it seems Piccolotti — though he has some good wins on his record — has not been able to get over that hump when a big-name, high-ranked foe is in his way. His four losses have come against the aforementioned Henderson and Outlaw, as well as to David Rickels and Goiti Yamauchi. If he can take out a longtime veteran like Karakhanyan, it would go a long way in helping him crack the Top 10. I just don’t see it happening, Karakhanyan is as crafty as they come and his experience edge will shine here.

Frankin and Sowma are currently ranked No. 8 and No. 9, respectively, in the Heavyweight division and are looking to potentially climb into the Top 5 with a win here. Though just four fights deep into his pro MMA career — all with Bellator — Frankling has really made an impression in his short run thus far, racking up for straight wins, all finishes, including three first-round knockout wins. In his last outing “All Day” starched Everett Cummings in just 21 seconds at Bellator 264. The man hits like a truck and his M.O. is no mystery: He wants to hurt you and get you out of the way as quick as possible. Sowma, meanwhile, is 2-1 so far under the Bellator umbrella. After coming up short in his Bellator debut against Tyrell Fortune, Sowma turned it around by scoring two straight wins over Ronny Markes and Vitaly Minakov. Now the American Top Team (ATT) -trained combatant is looking to make a statement against Franklin in hopes of crashing the Top 10. Like Franklin, Sowma packs plenty of power in his punches, but “All Day” might have a bit more snap in his strike. Still, that’s not to say one well-placed bomb from Sowma can’t get the job done, because it can. If it turns in a barn-burner, I expect Franklin to get the most of Said, and what will be the end result is a knockout win to remain undefeated.

To check out the latest Bellator MMA-related news and notes be sure to hit up our comprehensive news archive right here.