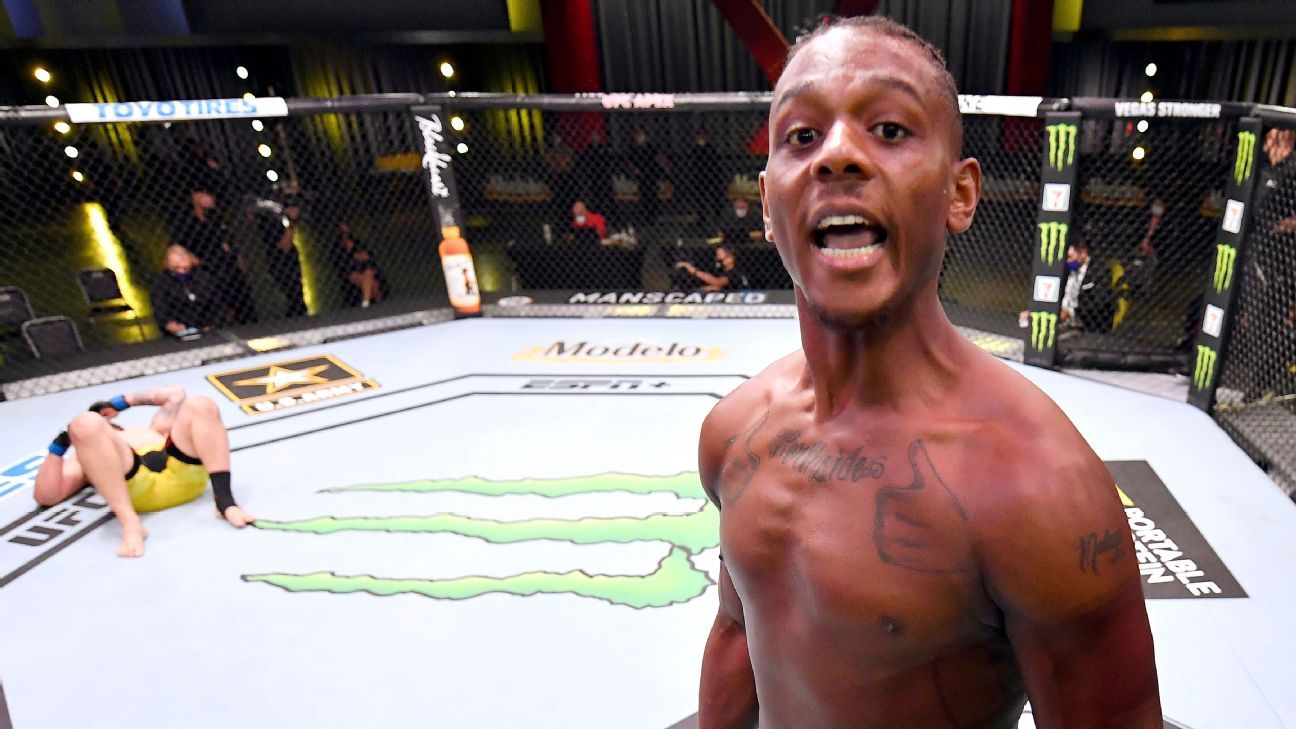 They are two of the most exciting words in mixed martial arts: Fresh blood.

But when it happens — when someone does manage to shake things up and turn a division on its head — it’s exciting. The UFC’s upcoming schedule is dominated by a crop of potential new title contenders, and most are scheduled to headline a UFC event for the first time.

Who are the ones to keep an eye on, and how far will they go? ESPN consulted with a panel of experts — Michael Chiesa, current UFC welterweight; Alan Jouban, ESPN analyst and retired UFC welterweight; and Sayif Saud, head coach of Fortis MMA — to create a scouting report and outlook on this new class of contenders.

Hill has shown a ton of promise, but it’s too early in his career to confidently predict where he’ll land. There wasn’t too much consideration on Hill’s one loss, a submission against Paul Craig, as Craig’s guard is notoriously tricky. But there are still as many questions as there are answers around Hill’s ceiling.

“When you’re under 10 fights in your career, there is so much s— you haven’t seen yet,” Jouban said. “You probably haven’t seen an All-American wrestler or a Brazilian jiu-jitsu black belt. His first five opponents, he probably just smoked on smaller shows. So, there are areas he hasn’t been tested in.”

Despite his lack of experience, Hill’s mindset is seen as an attribute. He’s a confident 30-year-old contender. Chiesa fought on the same night as Hill in 2020, and said he has a “calmness” to him on fight night. Saud noted his high degree of self-belief.

One concern moving forward could be Hill’s size. He does not cut a high amount of weight to make 205 pounds, which could offer challenges as he moves up the ranks.

“His ceiling at light heavyweight will be dictated by his size,” Chiesa said. “He’s definitely got skills, natural power, he’s really good with distance management — but I think it’s just going to get to a point where he’ll run into a guy like Magomed Ankalaev, who is every bit the light heavyweight, and size could come into play. I think he’ll get past the top-10 spot, but it’s going to be interesting to see if he can overcome that size disadvantage beyond that.”

As a potential title contender, Ankalaev faces several intangible hurdles, one of which is that his fighting style leans heavily on patience. That’s not the kind of light heavyweight the UFC is going to fast track into a pay-per-view-selling situation. But skills-wise, Ankalaev is the real deal.

Light heavyweights Johnny Walker and Jamahal Hill look for a signature win to kickstart their hopes of a push towards the upper echelons of the division.

He is defensively sound, maintains an intelligent shot selection, a calm demeanor — or, as Saud described him, “a cool character in there.”

He’s also an efficient grappler, with the ability to not only take his opponents down but control them once they are there. Everything Ankalaev does is efficient, from his standup to his offensive grappling. That patience, however, could be a concern as well. Not only because it doesn’t lend itself to action (Ankalaev has gone to decision in his last two fights), but also because it could be an area to exploit as Ankalaev moves up.

“Patience can sometimes be a curse,” Chiesa said. “What happens if there’s a guy in front of him who doesn’t want to lead the dance? Ankalaev is going to have to lead when that happens, which I’m sure he has no problem doing against lower-caliber competition, but what about the best? I think this guy will fight for a title someday, though. It’s written in the stars for him.“

Universally, Aspinall is viewed as one of the top future contenders in any division. The 28-year-old heavyweight out of Salford, England, has lost only twice — and, as Jouban points out, one loss was due to disqualification and the other was a heel hook. “He’s never really been soundly beat, is the point I’m getting at,” Jouban said.

Play for a chance to win a streaming of UFC 272 for FREE! Make Your Picks

The UFC is keen on Aspinall, as it booked him to headline its return to London next month. As far as what is to like about him, the panel agreed — it’s pretty much everything. He’s physically blessed with a combination of speed and power. His weight is around 240 pounds, rather than the 265-pound heavyweight limit. Agility. Elusiveness. And a ground game to go with it.

“He matches up with anyone,” Chiesa said. “Francis Ngannou and Ciryl Gane, you want to talk about a contrast in style? But Tom can bridge those styles. He can fight power with Ngannou, or he can be a methodical, technical, hybrid type like Gane.”

Along with the physical gifts, Aspinall has shown smarts inside the Octagon. He’s clever in finding a finish instead of simply emptying the gas tank when an opponent is hurt. He’s prepared, adjusts on the fly and he’s unpredictable.

“An example of this guy’s fight IQ was the Andrei Arlovski fight,” Saud said. “He doubles Andrei and takes him down, rear-naked chokes him out of nowhere. They ask him after if he planned on doing that and he goes, ‘No, I just saw it there.’ He finds different ways to win. Very intelligent fighter. He’s definitely a top five for me.“

The first thing that stands out about Lemos is her size. The 34-year-old Brazilian has fought multiple fights at the 135-pound bantamweight limit, making her one of the more physically imposing women at strawweight. Her 35-second knockout win over Montserrat Ruiz two fights ago is a reminder that her power is remarkable.

Monday through Friday, host Pablo Torre brings you an inside look at the most interesting stories at ESPN, as told by the top reporters and insiders on the planet. Listen

“She’s the kind of girl who can knock you out or sit you down with one punch,” Jouban said. “And she can do it with both hands. She’s an intimidating Brazilian striker, like a Thiago Santos, but when you get to the top end, you need the defensive wrestling, and we’ll see if she has that. But she’s a handful for anyone.”

Lemos is already 5-1 in the UFC, which is no small feat considering the depth at 115 pounds. And all three panelists saw her win over Hill as a significant one.

“She’s gotten over the veteran’s hump, I call it,” Chiesa said. “I can’t overemphasize that enough. I failed getting over that multiple times, and it went from a hump to a mountain. When I say she’s already past that, the only firm thing left from there to get over is title contention. She’s super confident now. She has potential to crack the top five.“

There are not many examples in MMA history that compare to Chimaev in terms of expectation and hype in a short amount of time. Born in Chechnya and now training in Sweden, Chimaev could be one win away from challenging Kamaru Usman for the welterweight title and then moving immediately up for a 185-pound title fight.

“He has the X factor in beating guys the way he has, taking no damage and doing it in two divisions,” Jouban said. “If this fight against Gilbert Burns happens, we know the level of grappler Burns is. If he goes out there and beats Burns handedly, that is gonna tell us a lot. And Israel Adesanya is gonna be shaking in his boots thinking, ‘Holy s—, this guy is running through elite grapplers.‘ That would be a real warning to the middleweight and welterweight [divisions]. I think both divisions will be looking at that fight very closely.”

No one believes the hype more than Chimaev himself, which Saud sees as another weapon.

“You really have to look at a fighter’s self-belief,” Saud said. “Look at Conor McGregor. No one can look at Conor now and say he’s unbeatable, unbreakable … but nobody can take away the magnificent, historical run he went on. And a lot of that was just self-belief, just like Anderson Silva. You almost become untouchable, and Conor reached that. He did. That’s a confidence that can take you very far, and Khamzat has that confidence. You can see it, and it’s real.”

Chimaev is a dominant wrestler and arguably the most physical welterweight in the division. He also showed one-punch knockout power in his win over Gerald Meerschaert, although the rest of his standup remains somewhat of a mystery. His athleticism jumps off the screen.

The only concern around Chimaev’s ceiling might revolve around who he would need to beat to reach the top.

“He’s getting a title fight for sure,” Chiesa said. “The problem is that right now, 170 and 185 pounds have two of the most dominant champs we’ve ever seen in Kamaru Usman and Israel Adesanya. I don’t know how he’d do against Usman. It’s tough for me. Can he do it? Yes. He’s got the size, speed, power, good camp, complete package. But I can’t just come out and say this is the guy who beats Usman yet. I’ll say he will become a champion someday, but I don’t know if it’s against Usman.“