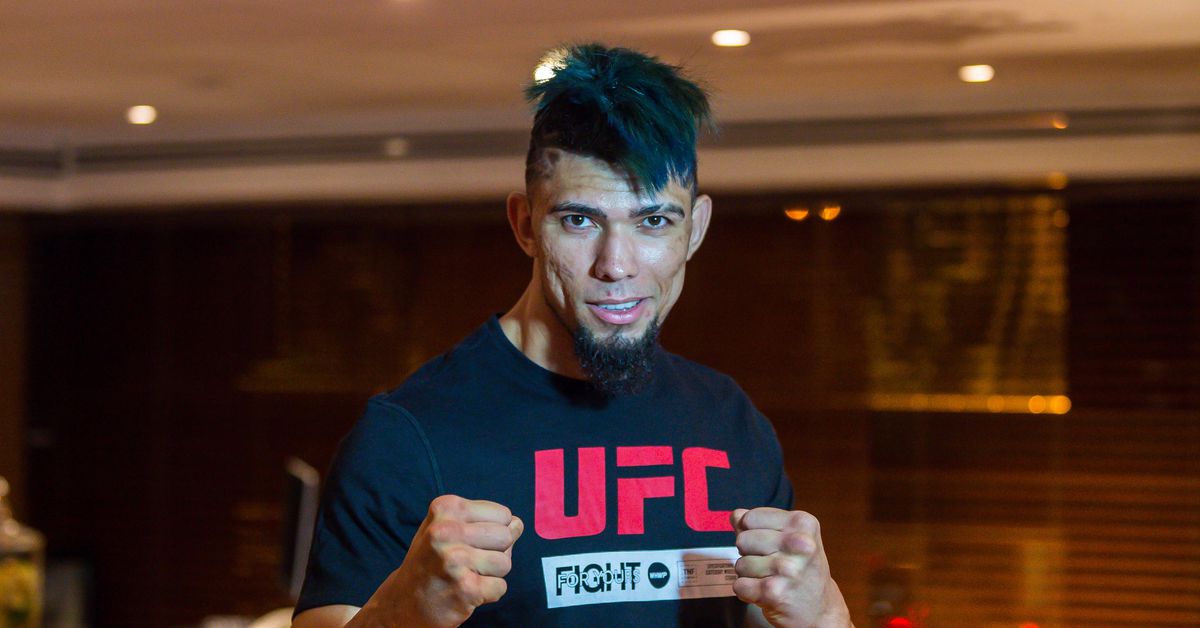 Ultimate Fighting Championship (UFC) will return later tonight (Sat., Feb. 19, 2022) to stage UFC Vegas 48 live from inside UFC Apex in Las Vegas, Nevada. In the main event of the evening, Johnny Walker battles Jamahal Hill in a Light Heavyweight showdown. In the co-main event, Kyle Daukaus takes on Jamie Pickett in a fight that will be contested at 195 pounds.

Johnny Walker was off to a hot start to his UFC career, winning his first three contests via devastating first-round knockout. From there, it didn’t take long for people to start hailing him as the one to possibly knock off Jon Jones from the Light Heavyweight throne. But the Brazilian bomber’s momentum was quickly halted after Corey Anderson knocked him out in the very first round at UFC 244. Soon thereafter, Walker suffered his second straight defeat, prompting his stock to go crashing down. Over his last four contests, the towering striker is just 1-3 and those conversations about being a legit title contender are no more, though that’s not to say he can’t build himself back up to that again.

In the first fight of his new six-fight deal with UFC, Walker will be facing off against a rising contender in Jamahal Hill, who is 3-1-1 so far in his young UFC career with his lone loss coming against longtime veteran Paul Craig. Among his wins inside the Octagon are a couple of stellar performances against Ovince Saint Preux and Jimmy Crute, both of whom he knocked out in impressive fashion. Despite only being 11 fights into his pro MMA career, Hill has already been tasked with facing stiff competition, so ahead of his first-ever UFC main event, don’t expect him to be rattled. On the contrary, we can expect him to shine. While Walker has shown flashes of brilliance he hasn’t been as consistent as many expected him to be. Hill is building some momentum for himself, and though he isn’t exactly the most polished MMA practitioner, he is a bit more controlled than Walker who tends to get crazy and unpredictable with his attacks. That might be good for the show, but when we get down to the bone of it, he needs to be a bit more calculated and focused. It’s Hill’s time to make a move in the 205-pound division, where he currently owns the No. 12 spot.

Jim Miller is widely known as UFC’s iron man since he has competed for the promotion 38 times over the course of 14 years. Through it all, Miller has taken on the likes of Nate Diaz, Clay Guida, Charles Oliveira, Anthony Pettis, Dustin Poirier, and the list just goes on and on. So to see him face off against a UFC newcomer in Nikolas Motta just doesn’t sit right with me. No disrespect to Motta, but I feel UFC should give its longtime veterans a bit more love with matchups against fighters of the same caliber. But as the saying goes, “You either die a hero, or you live long enough to see yourself become the villain a gatekeeper for upcoming talent.”

A Lightweight bout between Rafael dos Anjos and Rafael Fiziev was expected to headline this event, but it was ultimately pulled as a result of visa issues on Fiziev’s behalf. The fight will now co-headline UFC 272 next month. Julian Marquez was in line to face Kyle Daukaus at this event before he bowed out for undisclosed reasons. Stepping in to fill the void is Jamie Pickett, who gets a nice opportunity in the co-main event. Pickett is on a two-fight win streak while Daukaus is coming off a no-contest (NC) against Kevin Holland. That fight is expected to go down at a catchweight of 195 pounds.

Also, Austin Lingo was in line to face Jonathan Pearce in a Featherweight affair before he was forced out for undisclosed reasons. Stepping in to take his place is UFC newcomer, Christian Rodrigues, whom we will discuss a bit later on. Also, Khalid Taha was forced to withdraw from his scheduled fight against Mario Bautista. He was eventually replaced by another UFC rookie in Jay Perrin.

Ultimate Fighting Championship (UFC) continues its run of shows inside UFC APEX in Las Vegas, Nevada, on Sat., Feb. 19, 2022, with a thrilling match up of Light Heavyweight strikers when No. 10-ranked Johnny Walker locks horns with No. 12-seeded Jamahal Hill in the ESPN+-streamed main event. In UFC Vegas 48’s co-feature, Kyle Daukaus battles Jamie Pickett in a 195-pound Catchweight bout.

As mentioned earlier, Nikolas Motta will make his UFC debut on the main card against Jim Miller, so let’s take a look at the rest of the “New Blood.” Christian Rodrigues got the call up to the big leagues after Austin Lingo stepped out of his fight against Jonathan Pearce. Rodriguez is 7-0 so far in his pro MMA career. He has won all but one of his fights by way of stoppage. That decision win came on the Contender Series, defeating Reyes Cortes Jr. on all of the judges’ scorecards.

Jay Perrin also got his opportunity to make his UFC debut as a result of a withdrawal, and now he looks to make the most of his chance on the big stage after making the rounds in various promotions. Perrin has competed for Bellator MMA as well as Cage Titans FC, among others, and has racked up a 10-4 record. “Savage” has the opportunity to make a splash by upsetting Mario Bautista, who is coming off a loss to Trevin Jones.

Chad Anheliger is another product of the Contender Series and has won nine straight over the last six years. After competing the entirety of his MMA career on the regional circuit, “The Monster” has the chance to extend his win streak to 10 with a win over Jesse Strader, who came up short in his own UFC debut against Montel Jackson. This fight will take place on the undercard.

How The ‘Prelims’ Look:

The rest of the undercard will feature some veterans looking for all-important wins to help them climb out of the “prelims” and onto a main card down the road. Among them is Chas Skelly, who has been fighting for UFC for eight years now. And though he has collected a decent record of 7-3-1, he still doesn’t have as much of the spotlight as I’m sure he would like. He will be taking on Mark Striegl, who came up short in his UFC debut against Said Nurmagomedov, losing via first-round knockout back in 2020.

Jessica-Rose Clark will attempt to improve her win streak to three when she battles Stephanie Egger in women’s Bantamweight action. A six-fight veteran of UFC, “Jessy Jess” will be fighting for the longest win streak of her UFC career, which could help her crack the Top 15. Egger, meanwhile, is 1-1 so far in the UFC and is riding the wave of momentum following her stellar knockout win over Shanna Young in Oct. 2021.

Gabriel Benitez has had a pretty rough stretch as of late, losing three of his last four inside the Octagon. “Moggly” has shown promise during his UFC run, but his skid has really taken some wind out of his sails. He will look to correct his course when he battles David Onama in a 145-pound tilt. Onama suffered the first loss of his career after his eight-fight win streak was snapped by Mason Jones in Oct. 2021, so he will come out hungry looking for the win.

Who Needs A Win Badly:

Gloria de Paula has had two fights inside the Octagon, and both times she has come up short. In her debut, she lost a decision to Jinh Yu Frey. She followed that up with a knockout loss at the hands of Cheyanne Vlismas. If she can’t pick up a win in her third bout, it could be her final try to do so under the UFC banner. She will be facing Diana Belbita, who recently snapped her own two-fight skid by defeating Hannah Goldy in mid-2021.

One of the featured attractions on the main card is a Middleweight fight between Joaquin Buckely and Abdul Razak Alhassan. With Buckley it’s either kill or be killed because over his last seven fights, he has won five of them by way of knockout, and he has been knocked out twice himself. Buckley is a highlight waiting to happen because the man takes risks that pay off more often than not. He will face some resistance against Alhassan, who recently got off a horrid three-fight losing streak by turning off Alessio Di Chirico’s lights in just 17 seconds. This has the potential to steal the show…assuming it lasts long enough to do so.

Also on the main card will be a Heavyweight tussle between Alan Baudot and Parker Porter. Baudot is winless so far inside the Octagon. He came up short in his UFC debut against top contender Tom Aspinall, and his knockout loss to Rodrigo Nascimento was ruled a no-contest (NC) after Nascimento failed a post-fight drug test. He needs to come up big against Porter if he wants to hang around the UFC roster a bit longer. Porter was knocked out in his UFC debut against Chris Daukaus, but he bounced back with a vengeance to score a couple of wins against Josh Parisian and Chase Sherman.

All in all, it’s a decent card with an intriguing main event between Walker and Hill that is equally important to both men. Walker is trying to capture that lightning he had early on in his UFC career while avoiding falling further down the ladder. As for Hill, he is looking for a huge staple victory to continue his upward trajectory which could see him land in the Top 10 should he accomplish his goal.

*Fight card, bout order and number of fights remain subject to change due to COVID-19.*

Remember that MMAmania.com will deliver LIVE round-by-round, blow-by-blow coverage of the entire UFC Vegas 48 fight card right here, starting with the ESPN+ “Prelims” matches, which are scheduled to begin at 4 p.m. ET, then the remaining main card balance (also on ESPN+) at 7 p.m. ET.

To check out the latest and greatest UFC Vegas 48: “Walker vs. Hill” news and notes be sure to hit up our comprehensive event archive right here.