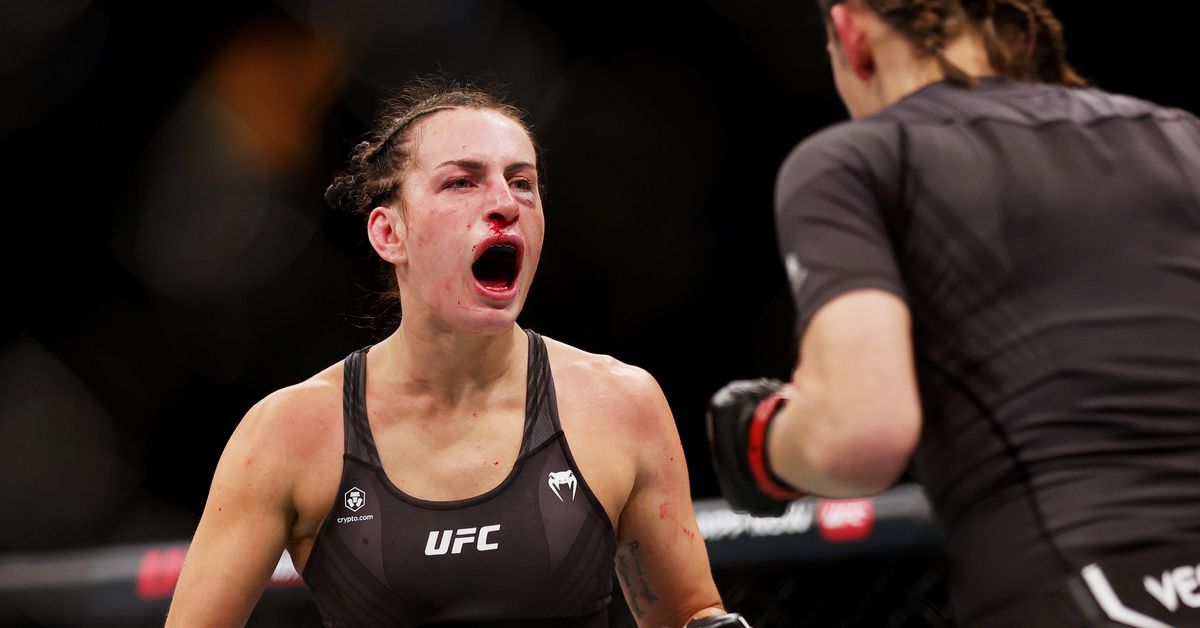 Casey O’Neill doesn’t care what you think of her overall, but deep down — no matter who you are — getting booed by an arena full of people after putting it all on the line certainly stings.

O’Neill recently earned a split decision win over the now-retired Roxanne Modafferi at UFC 271. Following the victory, the Toyota Center crowd in Houston showered O’Neill with boos, which led to a fiery response from the flyweight prospect.

“If you want me to be the bad guy then f*ck you, I’ll be the f*cking bad guy,” O’Neill shouted. “It’s clear to me and to everyone, Roxanne put everything she had left into that camp. She deserves all the good things after this sport, whatever she wants to do.”

Comparisons between O’Neill’s response to the boos and Al Iaquinta’s following his decision win over Jorge Masvidal in April 2015 were noted almost immediately during the pay-per-view event.

“After everyone was tagging him in it, that was fun because I love Al Iaquinta,” O’Neill said on The MMA Hour. “That’s how you feel afterward. It f*cking sucks when they start booing you after going out there to entertain them, and then they just want to boo you for no reason. It doesn’t make any sense to me.”

There are pro-wrestling roots in MMA, so when responses like O’Neill’s take shape, fans use terms like “heel” and “babyface” to describe the moment. O’Neill believes she wasn’t taking either side — she was being unapologetically herself.

“I think I’m polarizing on both sides. There are a lot of people who do love me for what I say and who I am, and a lot of other people that hate me for what I say and who I am. I’m just trying not to care at all what people think either way. Of course, I’ll be honest, it doesn’t feel great to get booed or anything like that when you go out there and give your heart, put everything on the line. I feel like I did give everything in myself in that fight, and I was raw and emotional. Getting booed kind of sucked, but I quickly turned around and was like, it doesn’t really matter.”

Modafferi competed for the 50th and final time of her career in the UFC 271 fight. “The Happy Warrior” ended her nearly 20-year pro career with three straight losses against a trio of legitimate prospects in the division in O’Neill, Taila Santos and Viviane Araujo.

The narrative surrounding the fight was more about Modafferi’s exit than O’Neill’s rise in the UFC, which admittedly annoyed the 24-year-old undefeated pro. From the get go, O’Neill always had respect for her legendary opponent, but she isn’t one to let that be fully shown before the octagon door locks.

“I’ve always loved Roxy, but in my mind, and who I am as a person, when I’m fighting someone I can’t be their friend,” O’Neill explained. “I don’t want to be doing all of that buddy-buddy stuff, and it’s so hard because she came up to me during the week and was like, ‘I can’t wait to fight you,’ and was so nice, and I was like, ‘Stop it. You’re getting in my head.’

“She was trying to shake my hand before the fight, but if you watch back all of my fights, I never touch gloves at the start of the fight. It’s just something that I’ve never done. I save being friends until afterward, and full respect for Roxy. That was a great fight. I like her, we’ve spoken since the fight and plan to train together soon, hopefully, in Vegas. I wish her all the best.”