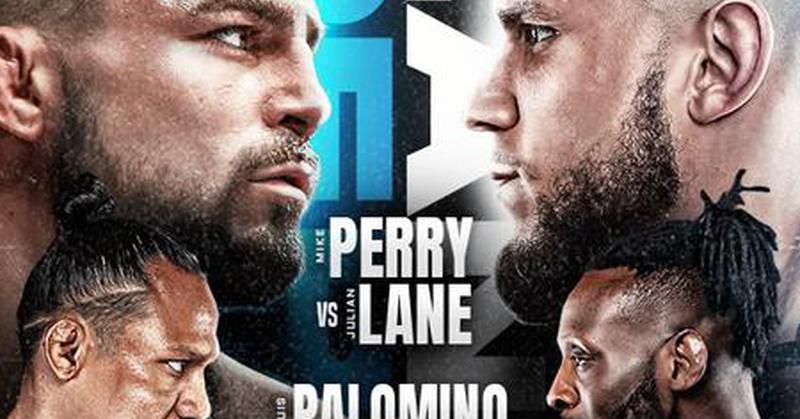 Round 1: “Baboon” Palomino in black and white, “Smash” Brown in purple. They crash together and Palomino gets in a right on the separation. Both men miss right hands. Looked like Brown got knocked off his feet, but they call it a slip and we continue. Uppercut from Palomino. Brown gets in a right. 10-9 Palomino.

Round 2: Both men crack right hands on each other. Again they land rights. Brown with some left body shots in the clinch before the ref breaks it up. Palomino swings big with the ten-second clapper and an uppercut likely steals the round. 10-9 Palomino.

Round 3: Right hand from Baboon. Palomino jumps in and lands a lead left that seems to bother Brown. Brown with a right hand, but partially blocked. 1-1-2 for Palomino and it looked like that 2 got in there. Palomino swinging big at the clapper again, slips, but no knockdown. 10-9 Palomino.

Round 4: Brown with a jab. Another falls short. Luis gets in one of his own. Brown ducks a lunging shot and they clinch. Right hand from Brown. Left just misses from Palomino. A right hand doesn’t. They clinch and trade at the bell. 10-9 Brown.

Round 5: Brown more aggressive as his corner told him he’s probably losing. Punch and clutch for Brown, but that’s fine for Palomino, as he’s safe. There’s a left from Palomino. Shovel hook by the champ. 10-9 Brown and 48-47 for Palomino in my opinion.

Round 1: Perry in white, Lane in pink. Lane starts out with a couple jabs and an overhand. Big right hand counter sends Lane down and he’s wobbled getting up! Jab from Lane. That cuts Perry over the eye. They clinch and Perry with a left uppercut. Lane cut, too. He’s lunging and landing with that jab. 10-8 Perry

Round 2: More measured round so far. Lane felt the power and Perry has calmed down a bit. Counter left almost drops Lane, but they call it a slip. Lane keeps landing his jab and is also starting to land some hooks, too. Right hand from Perry. 10-9 Lane in a close round.

Round 3: Perry advancing and gets in a right to the ribs. Left hook, too. Nice right hand from Lane as he circled out and countered Perry as he was coming forward. Perry to the body and follows to the head. 10-9 Lane in another close round.

Round 4: The doc checks out Lane before the round starts, but we’re up and going. Perry surges forward and lands a couple shots. Perry with a left slap that gets a warning from the ref. Good counter left from Perry. Right to the body as well. They both get in lefts. Nice overhand right from Lane. 10-9 Perry.

Round 5: Perry is now bleeding from his left side, too. Lunging right hand from Lane. Another right on the exit from the clinch. Counter right from Perry, but Lane got in a straight and Perry might be wobbly. Lane misses the 1, lands the 2. Perry gets a left to the body. Ducks a big winging punch. Lane with a left to end the fight. 10-9 Lane, and I have it as 47-47 on my card.

Round 1: Note: Joshua “Famez” Alvarez missed weight for this contest, tipping the scales at 161.4. Mendes showed up on weight at 155.8. Mendes in black, Famez in white. Mendes winging right hands early. Famez not throwing much, being very conscious of Mendes’ power. Gets in a jab. He’s walking forward most of the time, but not much being thrown. Mendes not landing much either, however. 10-9 in a close round.

Round 2: Mendes shoots, almost for a takedown, but probably to fluster his opponent. Mendes gets in a left. Famez with a clipping right, Mendes swinging big in the pocket, but not landing on the bullseye. BIG right hand down the pipe plants Famez! He gets up and the round ends before anything else can land. 10-8 Mendes.

Round 3: Mendes doing a good job at exploding when he wants to go. Famez isn’t really throwing anything much now, focusing more on avoiding the shots from Mendes. Nope, doesn’t avoid that right hand and down he goes again. 10-8 Mendes.

Round 4: Credit to Alvarez for still being here, despite two bad knockdowns. He’s throwing a bit more now as his corner threatened to stop it if he just stands there and doesn’t throw. Mendes wraps a hand behind the neck and pummels in two left uppercuts, sending Famez down for a third time. Mendes surges forwards and down he goes again! He stands at 9, but the ref waives it off, and Mendes has done it.

Round 1: Hart in purple and gold, black for Ferea. Slow start here as both women are feeling and feinting. Ferea gets in a jab to the body and Hart retaliates with a right hand to the head. 10-10

Round 2: Hart lands a jab. Ferea gets in a straight right. Hart throwing, but everything landing about 3 inches short. Good right from Ferea now. She jabs to the body and the head. Another right hand. Easy 10-9 Ferea

Round 3: Hart just seems to be throwing where she hopes to catch Ferea walking in, because almost all he stuff lands short unless Ferea is also throwing. Both women flurry and clinch. 10-9 Hart

Round 4: Good swinging from both women to open the round. Ferea grabs a hockey-style collar tie and is firing short shots over and over. Another big series of flurries from both women. Nice Hart right hand drives Ferea back. Jab from Ferea. Ferea ducks a right and they clinch. 10-9 Ferea

Round 1: Trujillo in blue, Townsel in black. Trujillo gets in a left. Shot to the body, too. Townsel clips a right hand. Down goes Townsel off a left hand! He makes the count and we’re back. Right from Trujillo, causing Townsel to duck and turn his back. They restart and there’s a big right uppercut from the Cuban and Townsel is down and out.

Gustavo Trujillo def. Stephen Townsel via KO at 1:41 of Round 1

For all the bareknuckle boxing-related news and notes, including all the coverage on “Knucklemania 2” that is (and isn’t) fit to print, click here.