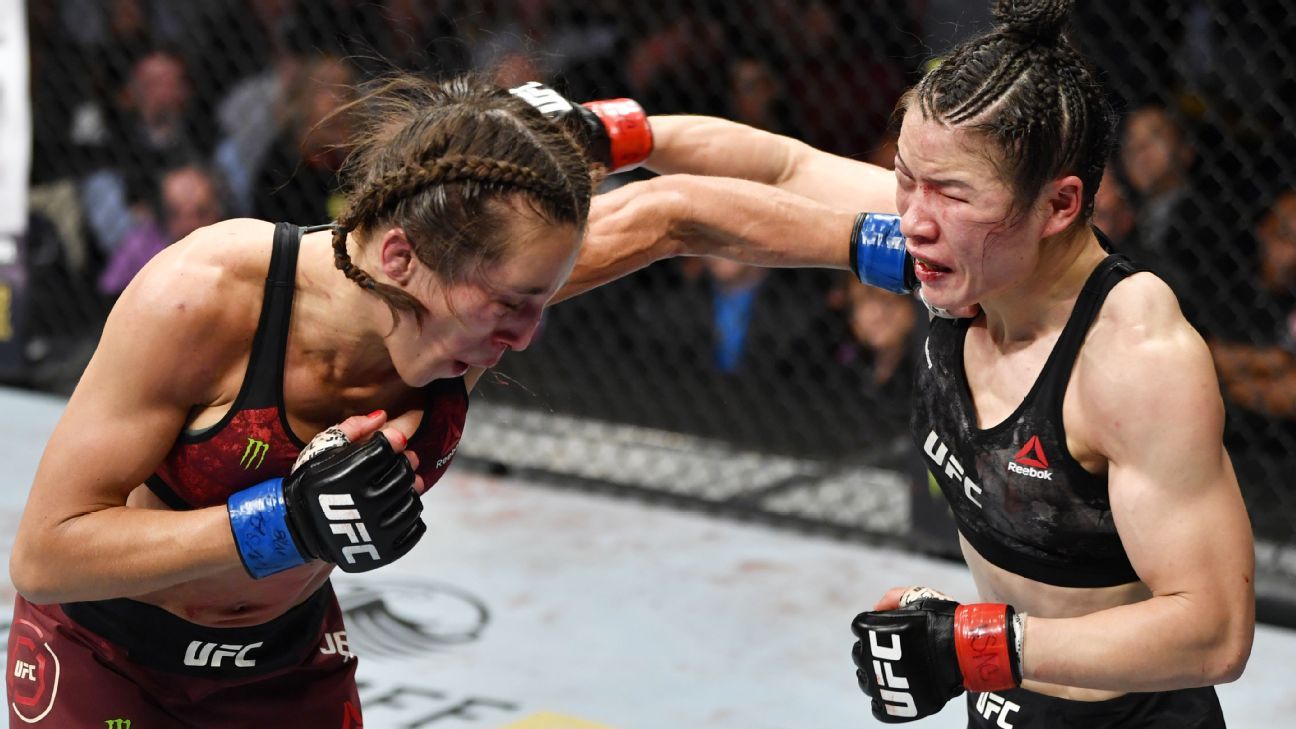 COCONUT CREEK, Fla. — Joanna Jedrzejczyk arrived back in Florida from her home in Poland last month. The plan was for her to start training camp at American Top Team with an eye toward a rematch with Zhang Weili in March or April.

That is not quite how things have worked out.

In an interview with ESPN last week, the former UFC women’s strawweight champion said she was told that Zhang could not fight until summer or later, so their rematch has been put on the back burner. Jedrzejczyk said she has booked a flight back to Poland in April, but could change those plans and stay if a fight comes up before then.

Jedrzejczyk, 34, said she’d like to fight next against Zhang or current champion Rose Namajunas, who has defeated Jedrzejczyk twice before. Namajunas, though, is likely to defend her title next against Carla Esparza. Jedrzejczyk maintains that she wants to fight only the top athletes in the division.

“Some of the people are like, ‘Oh, you have been not fighting for such a long time, get an easy fight,'” Jedrzejczyk said. “That doesn’t mean get an easy fight. The fight is a pleasure. The camp is hard. The hard work is so many weeks before the fight. I have to cut the same amount of weight, so I prefer to fight the greatest, the best. This is what I’m looking for — fighting No. 1 or the champion.”

Last October, it came as a surprise to many that Jedrzejczyk was removed from the official UFC rankings. Jedrzejczyk said it’s not because she is retired or out of contract, merely that she has not been active, which has been her choice. Jedrzejczyk has not fought since a split decision loss to Zhang at UFC 248 in March 2020, just a few days before the novel coronavirus spread was ruled a global pandemic.

“It was my decision to not fight for such a long time,” she said. “I wouldn’t fight without audience, so I’m very happy that the fans are back to the arenas.”

Jedrzejczyk said she believes she has only one fight left on her contract, though the UFC said it is two. Still, she has no designs on going anywhere, saying she’d like to come to terms on an extension. Jedrzejczyk added that she has been back in training now for about four weeks at American Top Team and feels strong physically and mentally. Retirement is not at all in her thoughts at this point.

Jedrzejczyk (16-4) still has the most wins (10) and title defenses (5) in UFC women’s strawweight history. In fact, she is the only fighter to have more than a single defense in her strawweight reign.

“I feel like I can do more,” Jedrzejczyk said. “I want to do more. If I felt that I can’t keep up with all these girls or I don’t feel well during training or I have so many injuries, I would say stop to martial arts. But no, I feel great. I feel like I will deliver new things.”