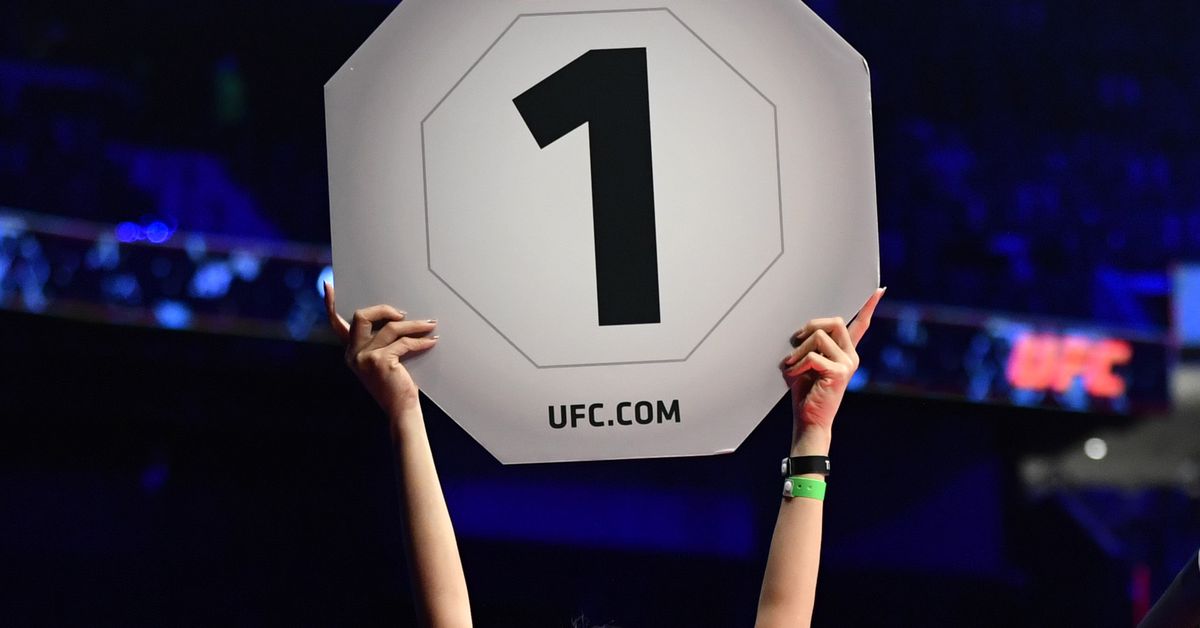 UFC Vegas 49 features seven “Prelims” undercard bouts this time, all of which join the main card on ESPN+. Let’s take a gander at the first batch …

Jinh Yu Frey (11-6) — the former Invicta Atomweight champion — stumbled out of the UFC gate with consecutive losses to Kay Hansen and Loma Lookboonmee. She’s since won two straight to match her longest winning streak since 2016.

She stands one inch shorter than Hannah Goldy (6-2), but sports a four-inch reach advantage.

“24K” had her own share of Octagon struggles after a successful Contender Series appearance, dropping consecutive decisions to Miranda Granger and Diana Belbita. She came up big with her back against the wall, however, tapping Emily Whitmire for her first UFC victory in Sept. 2021.

She has scored one knockout and submission apiece as a professional.

Credit where it’s due: I’ve long criticized Frey for her complete lack of urgency in the cage, but she landed more significant strikes against Yoder than she had in her first three UFC bouts combined. That should serve her well against the high-volume attack of Goldy, who would otherwise have a real shot at simply outworking Frey to a decision.

What seals it for Frey, however, is how easily Whitmire took Goldy down in the clinch. Frey’s very difficult to dislodge once she lands on top, and if Goldy gives her those same sorts of opportunities, “24K” will end up stuck underneath her for minutes at a time. In the end, heavier punches and long stretches of ground control should win the day for Frey.

He gives up two inches of height and three inches of reach to “Dragon.”

A dominant 4-1 run — marred only by a bogus decision loss to Andre Ewell — came to a dramatic end for Jonathan Martinez (14-4) when Davey Grant caught him with a murderous left hand. Undaunted, he re-entered the win column seven months later by cruising past unbeaten newcomer Zviad Lazishvili.

His nine professional stoppages are split 7/2 between knockouts and submissions.

Durability looks like the deciding factor here. Though Martinez has that loss to Grant dangling over his head, Perez gets hurt more often, and Martinez is also the higher-volume striker of the two. Perez’s ground game doesn’t figure to play a factor, either, as he’s unlikely to break through Martinez’s battle-tested takedown defense.

Between the height, reach, output, power and chin disparities, Perez just doesn’t have a lot going his way in this matchup. He’s exceeded my expectations before, but odds are that Martinez controls a pure stand up battle before ending it in the second.

Prediction: Martinez via second round knockout

Ramiz Brahimaj (9-4) rebounded from a UFC debut loss to Max Griffin by choking out Sasha Palatnikov halfway into the first round. This set up a crossroads bout with Court McGee, who overpowered Brahimaj with relentless pressure to hand him his second Octagon defeat.

He steps in for the injured Jonny Parsons on just over one week’s notice.

The gung-ho attitude of Micheal Gillmore (6-4) impressed Dana White on TUF 29, but it didn’t save him from a rapid submission loss to Gilbert Urbina in his late-notice bout. He then squared off with Andre Petroski at the Finale, ultimately succumbing to ground-and-pound in the third round.

Three of his professional wins have come by form of knockout, two of them in the first round.

This is definitely a make-or-break fight for Brahimaj. Losing to tough customers like Griffin and McGee is one thing, but it’s hard to see him bouncing back if he can’t beat someone this tailor-made for him. Gillmore’s issues on the ground are well-documented and his potential standup advantage isn’t anywhere near significant enough to make up for that.

If Brahimaj knuckles down and pursues the takedown early and often, this shouldn’t be particularly difficult. If the short notice and one-sided nature of his recent defeat sap his gas tank, things could get messy. I’ll be an optimist and say we see the former.

Prediction: Brahimaj via first round submission

Victor Altamirano (10-1) put a 2019 submission loss to Jarred Brooks behind him to win three straight, including a decision over Nate Smith to claim the LFA Flyweight title. Six months later, he narrowly edged out Carlos Candelario on Contender Series to secure a contract.

“El Magnifico” has submitted four professional foes and knocked out one other.

Carlos Hernandez (7-1) won 13 of his 15 amateur bouts before dropping his 2017 professional debut to Gustavo Balart. Nearly five years later, he survived a disastrous first round to defeat Daniel Barez on Contender Series and punch his ticket to the world’s largest fight promotion.

Whoever’s in charge of the matchmaking for Octagon newcomers has done a remarkably terrible job of late, but I really like this one. This is a case where each fighter is well-equipped to exploit the other’s weaknesses: Altamirano’s straight punches and sharp counters are a problem for the overly linear Hernandez, while Hernandez has the combination punching and strong top game to give the defensively lax Altamirano plenty of issues.

I’m leaning Hernandez’s way, largely because of his ground skills. While he’s a poor offensive wrestler, Altamirano struggles to stop takedowns even when he’s trying to do so. A peppering of takedowns and ground control should swing things his way in a back-and-forth battle.

Remember that MMAmania.com will deliver LIVE round-by-round, blow-by-blow coverage of the entire UFC Vegas 49 fight card right here, starting with the ESPN+ “Prelims” matches, which are scheduled to begin at 4 p.m. ET, then the remaining main card balance (also on ESPN+) at 7 p.m. ET.

To check out the latest and greatest UFC Vegas 49: “Makhachev vs. Green” news and notes be sure to hit up our comprehensive event archive right here.