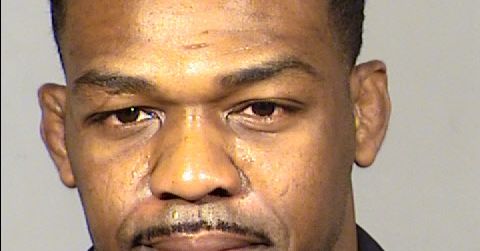 New video shows former UFC light heavyweight champion Jon Jones head-butting a police car and screaming obscenities at officers on the Las Vegas strip after being detained in the early hours of September 24, 2021.

Jones allegedly also directed racial slurs at the officers, according to a report from the Las Vegas Review Journal, which obtained the body-worn camera footage after the ex-UFC champion reached a plea deal with prosecutors; he initially was arrested and charged with misdemeanor battery domestic violence and injuring or tampering with a vehicle.

At several points in the footage, Jones’ voice is bleeped out. A public records request for the unedited video is pending with the Las Vegas Metropolitan Police Department.

The vehicle charge stemmed from “a medium size dent as well as chipping of some of the paint on the vehicle” that Jones head-butted after an emotional outburst, prompting several of the officers to intervene to calm the fighter. At least six officers could be seen in the video.

Jones erupted after being handcuffed against a police cruiser and grew more agitated as officers tried to question him. He repeatedly said he had just come from his UFC Hall of Fame induction and accused the officers of targeting him because of his race.

“Say your name publicly. … You turned me in my Hall of Fame night, just because I’m big and Black. And what did I do? …. I came from my Hall of Fame ceremony, and I’m Black, and I did nothing to you.”

At one point, a distraught Jones tells an officer, “Bro, hang me. Hurt me and kill me. What did I do?” Then, he cries, “A Black man can’t drink? Getting elected into the Hall of Fame, and this is what I’ve got?”

Jones begins jumping up and down and is told to relax before yelling, “I hate you!” and striking the car with his head.

As Jones is led to a police cruiser, he begins to comply with officers’ orders.

“Jon, you need to chill, you understand?” one officer said.

“You did it, sir, because you’re on video doing it,” the same officer yells. “Chill out!”

“That’s going to be on YouTube tomorrow,” Jones said later, appearing to refer to someone filming the interaction. “Look at him.”

The arrest took place shortly after police were called to a domestic disturbance at Caesar’s Palace following Jones’ induction into the UFC Hall of Fame for his 2013 fight against Alexander Gustafsson. Hotel security observed Jones’ fiancee, Jesse Moses, bleeding from her nose and mouth. She later gave a statement to officers and admitted that Jones got “a little physical” with her in front of their three children.

Jones was arrested and taken to jail after resisting arrest, according to a police report of the incident. He was released the same night after posting bail. The 34-year-old fighter later pleaded nolo contendere to a lesser misdemeanor charge of destroying property.

Jones’ arrest arrived the same night he told reporters he expected to return to the octagon in the second quarter of 2022 to make his debut as a heavyweight. He has not fought in the UFC since a light heavyweight title defense in February 2020. He later relinquished the belt amid a contract dispute with the promotion.